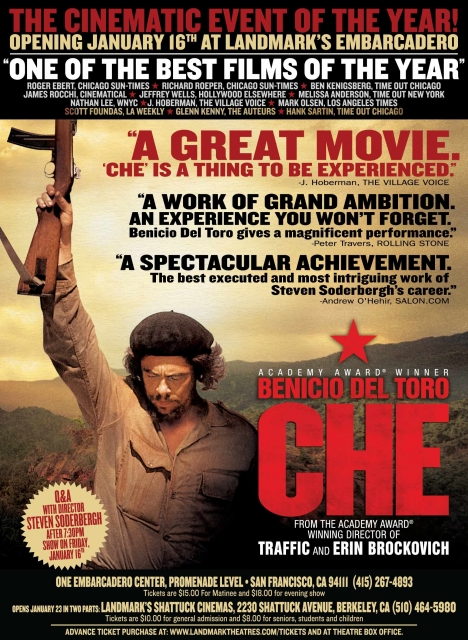 Import event into your personal calendar
Date:
Friday, January 16, 2009
Time:
1:30 PM - 1:30 PM
Event Type:
Screening
Organizer/Author:
Location Details:
Landmark’s Embarcadero Center Cinema, One Embarcadero Center, Promenade Level, San Francisco, (415) 267-4893
Roadshow Engagement tickets are $18.00 for regular/evening showing and $15.00 for matinee/senior
Showtimes are 1:30 and 7:30 (1/16-22); tickets on sale now
Hey everybody! I'm here to tell you about the new film opening from director Steven Soderbergh: CHE. UPDATE: Film will now be premiered as one film with an intermission, for one ticket price. Confusing I know, but that's how TPTB have willed it. So, come spend your day with us and see CHE, opening January 16th. More details on the film and the theatre are below.

Advance ticket purchase at: http://www.landmarkthe... and at theatre box office.

Director Steven Soderbergh's two-part epic about the life of Ernesto "Che" Guevara stars Benicio Del Toro (Best Actor, 2008 Cannes Film Festival) in a tour de force performance as the legendary revolutionary. Part One shows how Che proved to be an indispensible fighter, along with Fidel Castro, in the overthrow of the corrupt dictatorship of Fulgencio Batista. As he throws himself into the struggle, Che is embraced by his comrades and the Cuban people. Che rises to prominence in the Cuban Revolution, from doctor to commander to revolutionary hero.

Part Two shows Che at the height of his fame and power. Then he disappears, re-emerging incognito in Bolivia, where he organizes a small group of Cuban comrades and Bolivian recruits to start the great Latin American Revolution. The story of the Bolivian campaign is a tale of tenacity, sacrifice, idealism, and of guerrilla warfare that ultimately fails, bringing Che to his death. Through this story, we come to understand how Che remains a symbol of idealism and heroism that lives in the hearts of people around the world.

ONE OF THE BEST FILMS OF THE YEAR

"CHE is a thing to be experienced. A GREAT MOVIE. " J. Hoberman, Village Voice
Added to the calendar on Fri, Jan 9, 2009 12:06PM
Add Your Comments
Support Independent Media
We are 100% volunteer and depend on your participation to sustain our efforts!