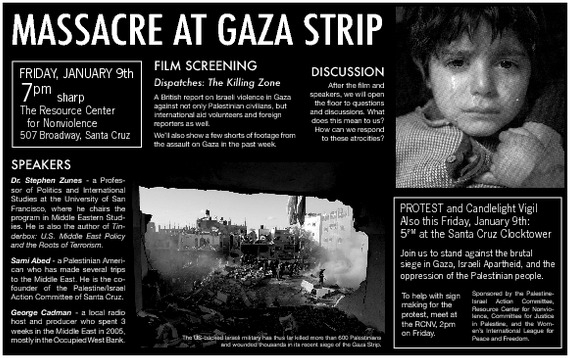 FILM SCREENING
Dispatches: The Killing Zone
A British report on Israeli violence in Gaza against not only Palestinian civilians, but international aid volunteers and foreign reporters as well.

We’ll also show a few shorts of footage from the assault on Gaza in the past week.

SPEAKERS
Dr. Stephen Zunes - a Professor of Politics and International Studies at the University of San Francisco, where he chairs the program in Middle Eastern Studies. He is also the author of Tinderbox: U.S. Middle East Policy and the Roots of Terrorism.
Sami Abed - a Palestinian American who has made several trips to the Middle East. He is the co-founder of the Palestine/Israel Action Committee of Santa Cruz and a local paramedic.
George Cadman - a local radio host and producer who spent 3 weeks in the Middle East in 2005, mostly in the Occupied West Bank.

DISCUSSION
After the film and speakers, we will open the floor to questions and discussions. What does this mean to us? How can we respond to these atrocities?

PROTEST and Candlelight Vigil
Also this Friday, January 9th:
5PM at the Santa Cruz Clocktower.
Join us to stand against the brutal siege in Gaza, Israeli Apartheid, and the oppression of the Palestinian people. 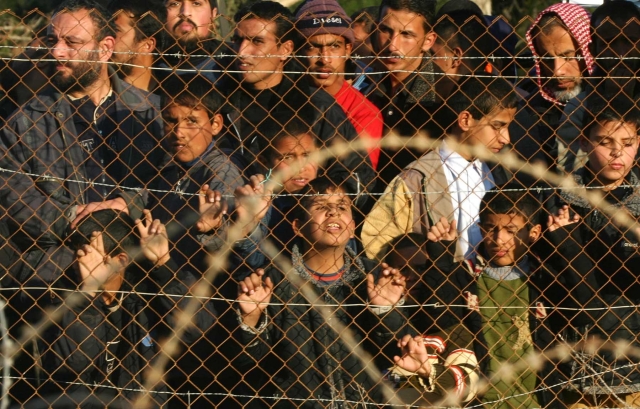 original image (1800x1151)
END_OF_DOCUMENT_TOKEN_TO_BE_REPLACED
Add Your Comments
Support Independent Media
We are 100% volunteer and depend on your participation to sustain our efforts!