Shortly after darkness fell on Saturday night, January 3, Israel launched a massive land invasion of Gaza involving 9,000-10,000 soldiers, tanks, helicopters, and heavy artillery, engineering and intelligence forces, with the support of Israel’s Air Force, navy, and secret police and spy agencies. The ground invasion came after Israel, for the first time, unleashed an artillery barrage on Gaza, striking a mosque and killing at least 11 people. By the next day, Israeli forces had reportedly cut Gaza in half, “bisecting” it between north and south.

Seven straight days of Israeli bombing before the invasion had already resulted in an estimated 460 killed and 2,285 wounded (with the numbers increasing by the hour). Now more carnage looms with The New York Times (January 4, 2009) already reporting “Wounded civilians poured into the emergency room of Shifa Hospital in Gaza City on Sunday, including women and children.” And Israel’s ban on journalists from entering Gaza means that much death and destruction has gone unreported. 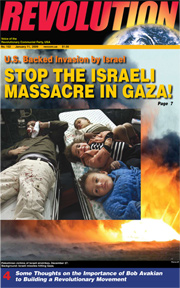 In a despicable display of Nazi-like threat and false show of concern, Israel dropped leaflets over northern Gaza telling residents: “For your own safety, you are asked to leave the area immediately.” Yet Palestinians are trapped in Gaza by Israel. Where are they supposed to go?

This raises the specter that many people, unable to leave, will be murdered. And according to a March 2008 report on Israeli Channel Two (after a visit from U.S. Secretary of State Condoleezza Rice), Israel’s strategy may be “for the removal of tens of thousands of Palestinians from the northern Gaza Strip, namely from the region that the resistance uses for the launch of these rockets, and to move them toward Gaza City and to confine them there.” (See http://arablinks.blogspot.com/2008/03/after-meeting-condi-israeli-officials.html)

The forced removal of a civilian population is the textbook definition of ethnic cleansing and a war crime.

In the past several days the U.S. government has made its support for Israel’s murderous assault on Gaza crystal clear. The U.S. was informed before Israel launched its attacks (and was reportedly involved in months of Israeli planning), and now CNN reports (January 4, 2009) that the U.S. military was “aware in advance of Israel’s plans to enter Gaza.”

So it is telling that on the very day of Israel’s invasion, President Bush gave his first public statement on Gaza—condemning Hamas, raising no criticism of Israel, and opposing a ceasefire, but instead justifying Israel’s attack: “This recent outburst of violence was instigated by Hamas—a Palestinian terrorist group supported by Iran and Syria that calls for Israel’s destruction.”

The same day, Secretary of State Rice strongly backed Israel and condemned any cease-fire that didn’t meet Israeli objectives. And the day before, a White House spokesperson said any decision on a ground invasion would be Israel’s to make—in other words, a bright green light for Israel from the U.S.

The U.S. through Israel is aiming to tighten its imperial domination of the entire strategic region. And Israel, for its part, aims not only to aid U.S. imperialism in that, but to strengthen its own fortress-like settler state, even more ruthlessly oppressing and dominating the Palestinians.

The U.S., together with Israel, has a number of intertwining objectives it hopes to achieve with this military assault in Gaza. It wants to even more forcefully assert and hammer down the dominance of U.S. imperialism in the Middle East. As part of its so-called “war on terror,” the U.S. wants to further undermine and push back Islamic fundamentalist forces that pose a challenge to the U.S. empire. And it wants to brutally put down the struggle of the Palestinian people and break their will to resist.
“Surgical” Strikes Targeting a Society

Israel claims that Hamas “started it,” and that now Israel is simply trying to defend itself against Hamas “terrorists,” in order to stop rocket attacks on Israel and the Jewish people.

Yet there is absolutely nothing just or legitimate about Israel’s targeting of Hamas.

For one, it was Israel that first broke the ceasefire in November and has refused to negotiate its renewal (while planning this attack for its own strategic objectives for over six months). Israel’s war is aimed at strengthening its stranglehold on Palestine, by defeating Islamic fundamentalist forces like Hamas that pose an obstacle to unfettered US-Israeli control. As one senior military officer put it, Israel’s goal was “making Hamas lose their will or lose their weapons.”

One Israeli spokesperson declared, “We have defined legitimate targets as any Hamas-affiliated target.” (Washington Post, January 2, 2009). Armed forces deputy chief of staff Brigadier General Dan Harel stated, “After this operation there will not be a single Hamas building left standing in Gaza.” (Ynet News)

The Palestinian people have a long history of fierce resistance and uprising against the brutal Israeli occupation. And Israel faces a lot of necessity to put down this struggle. This is why, while Israel is targeting Hamas as the governing party in Gaza with ties to Iran—it is also doing this as a way of breaking the back of the resistance of the masses, which has been a U.S.-Israeli goal for over 60 years. Consider the fact that “[H]undreds of thousands of Gazans have received warnings in the form of telephone messages or fliers that their buildings are Israeli targets.” (New York Times, January 2, 2009)

Or consider U.S.-Israeli objections to a resolution proposed by the Arab League calling for “an immediate ceasefire and for its full respect by both sides,” and for Israel to abide by the Geneva Convention with regard to protecting civilians in time of war. The U.S. attacked it as “unbalanced,” after earlier forcing the removal of language calling on Israel to lift its blockade of Gaza and stop the collective punishment of Palestinians. (Antiwar.com, January 1, 2009). So even abiding by basic international law concerning war crimes and crimes against humanity is intolerable for the U.S. and Israel, and an impediment to their criminal attacks on the Palestinian people!

The U.S. has also opposed calls for a cease fire, blaming Hamas for the fighting and demanding it stop firing rockets before Israel is required to halt its military assault—in effect blocking any diplomatic moves that could in any way impede Israel’s attack. As the article, “On the Nature and Role of Israel, the United States and Obama” in this issue points out:

“What Israel is doing in Gaza is like the Nazis confining people in the Warsaw ghetto during World War 2 and then when people rebel, the Nazis say, “aha—we are being attacked and anyone who says anything about the situation has to first agree on that—and before anything can be done to resolve the situation, the people in the Warsaw ghetto have to stop attacking us.”
The U.S. and Israel’s Broader “War On Terror” Aims

Israel’s military assault on Gaza is part of a broad U.S.-Israeli counter-offensive against Islamic fundamentalist forces and Iran in particular which is seen by both as crucial to their broader “war on terror” objectives. This war, really a war for empire, is aimed at crushing Islamic fundamentalist forces, peoples and states which stand in the way of U.S. designs, and restructuring the region in order to strengthen the U.S. This war has made the U.S.-Israel’s strategic relationship ever more pivotal today.

Israel’s long-planned attack on Gaza is aimed at rolling back Hamas’ January 2006 election victory and its summer 2007 seizure of power in Gaza, as well as Israel’s political defeat in its summer 2006 war against the powerful and reactionary Hezbollah Islamic fundamentalist forces in Lebanon—Israel couldn’t deliver on its promise to destroy Hezbollah, which instead emerged strengthened. It’s also aimed at restoring Israel’s military “credibility”: “to expunge the ghost of its flawed 2006 war against Hezbollah in Lebanon and re-establish Israeli deterrence,” as the New York Times put it.

This war is also part of a broader U.S.-Israeli effort to roll back regional gains by Islamist forces, especially Iran, which is a large, relatively powerful and coherent Islamic theocratic state with enormous energy resources and its own reactionary ambitions. Iran has challenged U.S.-Israeli regional hegemony through its increasing influence in Palestine, Lebanon, Iraq, and the region generally. It’s also pursuing nuclear enrichment, which is considered intolerable in Washington and Tel Aviv, because even Iranian mastery of this technology could shift the regional military balance and impede U.S. and Israeli freedom of military action, even if Iran didn’t immediately make a nuclear bomb.

Hamas and the Iranian government do not offer the people a road to liberation and they do not break with imperialism in any fundamental way. These forces represent reactionary outmoded social relations. At the same time, it is important to be clear that it is U.S. imperialism, ruled by reactionary outmoded ruling strata, which has done and continues to do by far the greater damage and poses the greater threat to humanity (often, as in this case, acting through Israel).

Bush targeted Iran in his most recent radio address. Sallai Meridor, Israel’s ambassador to the U.S., stated, “What you see in Gaza is made by Iran—it’s funded by Iran, the terrorists are trained by Iran, it’s supplied by Iran, the know-how to create short range rockets is Iranian,” calling Iran “an octopus,” with proxies in region and beyond the region.” (Press TV, December 30, 2008)

Former U.S. Ambassador to the UN John Bolton, who remains a major voice in U.S. foreign policy, recently warned Fox News. “So while our focus obviously is on Gaza right now, this could turn out to be a much larger conflict. We’re looking at potentially a multi-front war.”

As the accompanying Revolution editorial assesses, “The danger of this crime spiraling into even wider and more criminal war is very real.

This is all the more reason to step up efforts to broadly educate people about what’s actually going on in Gaza, and
to build very broad mass resistance—immediately.
Add Your Comments
Support Independent Media
We are 100% volunteer and depend on your participation to sustain our efforts!