by Mike Rhodes (mikerhodes [at] comcast.net)
Notices have been posted on G and Santa Clara streets, putting the homeless on notice that they must “move on” or they will have their property taken by the City of Fresno. Photos of the notice and the encampment on Santa Clara street are below. 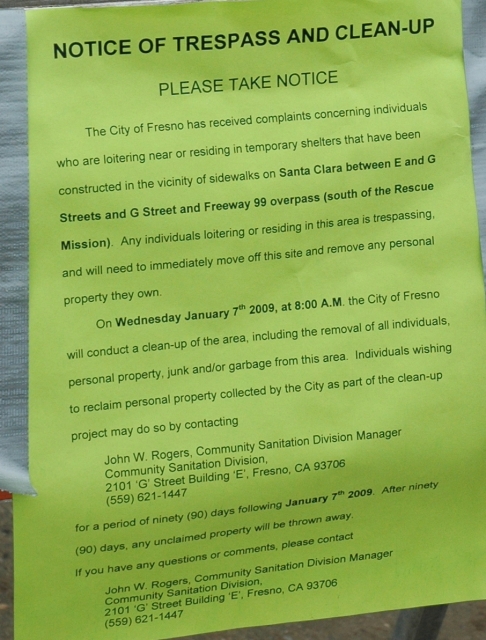 original image (906x1193)
Homeless people are once again being forced to pack up and move on, under the threat of having their property taken by the City of Fresno. The homeless encampment, pictured below, is the site of the current eviction. The encampment is on Santa Clara street, just outside of the Poverello House. The Poverello House is a homeless social service agency that provides food, maintains tool sheds for the homeless to live in, and provides other services. For more information see: http://www.poverellohouse.org/

The homeless people at this encampment and others in the downtown area have until Wednesday, January 7 at 8 AM to move. Homeless people living in the encampment on Santa Clara street told me that they don’t have anywhere else to go.

This eviction comes at a critical time, shortly after the City and County of Fresno have agreed to move in a new direction that provides housing for the homeless, rather than attacking them. The City of Fresno and Caltrans recently settled a lawsuit that awarded homeless people $2.3 million, because their rights were violated as a result of illegal destruction of their property. The settlement was part of the motivation for moving in the direction of Housing First, a national program that provides homeless people with housing, without pre conditions. For example, a homeless person does not have to be cured of drug addiction or mental illness before they can get housing. Housing is seen as fundamental to helping homeless people improve their lives.

The eviction on Wednesday, if it happens, will be on the day after Ashley Swearengin, the new mayor of Fresno, is sworn into office. Swearengin has pledged to end homelessness and supports the Housing First model.

Gregory Barfield, who has been hired as the Czar on Homelessness for the City of Fresno (at least that is what some people call the job), will start his job on Monday. Barfield, who tells me his official title is Homeless Prevention and Policy Manager, is adamant that the City is going to move in a new direction. He is a strong supporter of Housing First and is looking for ways to implement that policy.

Why then is the City of Fresno continuing with the policy of sweeping the homeless off the streets, essentially criminalizing poverty, taking their possessions, and forcing them to “move on” when there is no better place to move on to? When asked about this, Barfield wrote in an email that “There is no effort to move anyone expect those who might be blocking the sidewalk.” He assured me that “there is a new day and attitude” and that efforts are being made to implement the Housing First model.

What better time to signal a change in policy than the week that the new mayor takes office and the Homeless Prevention and Policy Manager starts his job? Will the “powers that be” make a break with the past, when homelessness was treated as a crime? Will they provide the leadership needed to start helping rather than hurting the homeless? If the City of Fresno moves forward with this “clean up” I would like Swearengin and Barfield to explain to this community how forcibly taking homeless peoples property and demanding that they “move on” when there is no better place to move on to, is helping the homeless.

Wednesday will be a test of whether this City’s policy on the homeless has taken one step forward or two steps back.


The following notice is posted in and around homeless encampments in downtown Fresno (South of Ventura):

NOTICE OF TRESPASS AND CLEAN-UP

The City of Fresno has received complaints concerning individuals who are loitering near or residing in temporary shelters that have been constructed in the vicinity of sidewalks on Santa Clara between E and G streets and G Street and Freeway 99 overpass (south of the Rescue Mission). Any individuals loitering or residing in this area is trespassing and will need to immediately move off this site and remove any personal property they own.

On Wednesday January 7th 2009, at 8:00 A.M. the City of Fresno will conduct a clean-up of the area, including the removal of all individuals, personal property, junk and or garbage from this area. Individuals wishing to reclaim personal property collected by the City as part of the clean-up project may do so by contacting

If you have any questions or comments, please contact 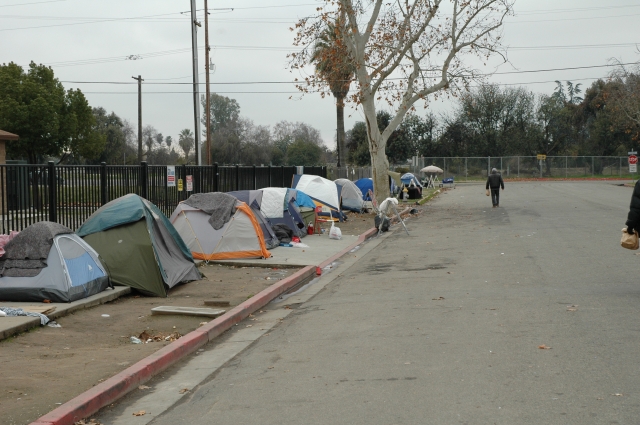 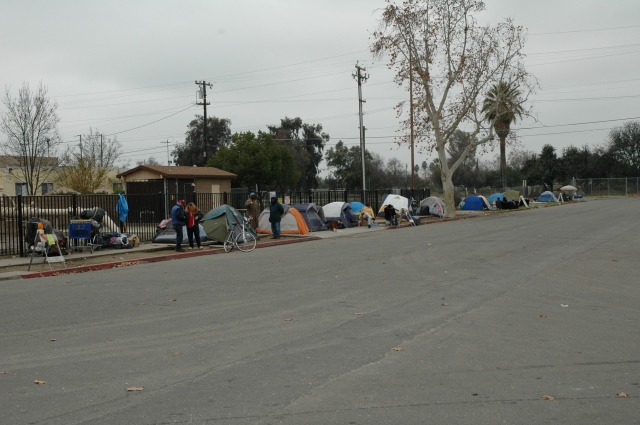 original image (3008x2000)
Where are these people supposed to move to? Unless the City of Fresno has a better place for these homeless people to move, they should not be forced off of Santa Clara Street.

END_OF_DOCUMENT_TOKEN_TO_BE_REPLACED
Add Your Comments
Comments (Hide Comments)
§empty houses
by np
dear lord. If you're homeless in Fresno, and being driven along from marginal land like that, it appears like there is no responsible option that one could take other than identifying some foreclosed houses and living in them for a while, at least to avoid being a nuisance on the street.
Add a Comment
§North of Herndon
by Vickie
I think they should move to the Riverpark area and to the neighborhoods north of Herndon. Maybe camp out in front of the homes of the City Council and Mayor. Maybe some of us can get together and help them move to a "better" part of town.
Add a Comment
§Help from Out of Town
by Robert Norse
Perhaps the writer could post some e-mail addresses of local newspapers, politicians, police officials, and other bureaucrats to contact to protest this action and demand fulfillment of the supposed commitments made by the new Mayor and his "homeless czar"?
Add a Comment
§How you could help
by Mike Rhodes (mikerhodes [at] comcast.net)
In response to several requests for information about what people can do to help, which I have received in the last couple of hours, I want you to know that:

I'm going to be there (at Santa Clara and G streets) on Wednesday to document what happens. We don't have a lot of time to organize any kind of a "response" to this latest development (the clean-up on Wed), but it would not hurt if you or others contacted Ashley Swearengin and or Greg Barfield and told them that you are concerned about this "clean up" and encourage them not to confiscate homeless peoples property and not force them to leave the Santa Clara encampment UNLESS they (the city) offers them a better place to go.

Greg Barfield can be reached through the City Manager's office, at:

Add a Comment
§Good News
by Mike Rhodes
There is actually some GOOD news to report. I talked to Greg Barfield, the new Homeless Prevention and Policy Manager, this morning and he assured me that the City of Fresno will not confiscate any homeless people's property on Wednesday. I told him that was great news and that the next thing we need to do for homeless people in Fresno (short term) is to provide them with drinking water, portable toilets, and a safe place to stay. The mid term goal is to start getting homeless people into some decent housing and off the street. He said he is working on that.

Mike Rhodes
Editor
Community Alliance newspaper
P.O. Box 5077
Fresno Ca 93755
(559) 978-4502 (cell)
(559) 226-3962 (fax)
AllianceEditor [at] comcast.net
http://www.fresnoalliance.com/home/
Add a Comment
§Help educate & assert the homeless of Squatters rights & culture!
by Wingnut Willy (wingnutrefugee [at] yahoo.com)
Squatting is highly encouraged here. I'm not a local to Fresno, but I would really, really, encourage people to make up (or get ahold of) some pamphlets, to hand out, on DIY (do it yourself) on how the homeless could squat abandon housing safely & as securely as possible. Grant it, a lot of folks are afraid, have warrants & don't want to get arrested for accusations the law may use against people for burglary, trespassing, ect... But it sure as hell makes more sense for folks to know some basic, 'how to do', concepts of asserting & taking back their (our) lives.
Squatting in Europe is much different than here, but whats worse...freezing at night & dealing with cops in everyone's business & all the other ongoing environmental elements that come along with homelessness or having a (somewhat more) secure place to live (if it's even for one night)?
Squat consideration will only become more & more common as foreclosure issues arise in the future.
RENT IS THEFT, CAPITALISM IS DEGRADING, HUMILIATING, DISGUSTING & EVEN UNNATURAL. TAKE BACK OUR LIVES TODAY!
Add a Comment
Support Independent Media
We are 100% volunteer and depend on your participation to sustain our efforts!