Nora Barrows-Friedman, is the Senior Producer and co-host of Flashpoints, a daily investigative newsmagazine on Pacifica Radio. Since 2004, she has been reporting regularly from the occupied West Bank, the Gaza Strip and from inside historic Palestine (Israel) for Flashpoints and as a correspondent for Inter Press Service, a news agency based in Europe. While in Palestine, Nora is based in the Dheisheh refugee camp where she volunteers with the media committee at the Ibdaa Cultural Center, working with refugee youth in journalism and digital media arts. She is also a contributor to Left Turn Magazine and ElectronicIntifada.net. Nora is also a mother, a photographer and a musician. Her website is http://www.norabf.com, and can be heard on http://flashpoints.net/index.html#2008-12-29 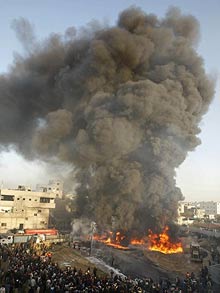 Over 100 Protest Israeli Atrocities in Gaza at Obama Transition HQ

In afternoon rush hour on December 29, at least 100 marchers gathered at Barack Obama's transition office to demand that he take a stand against Israel's relentless and murderous bombing of the Gaza Strip.

Palestine Bleeds; the World Shudders
http://www.indymedia.org/en/2008/12/918545.shtml
Add a Comment
Support Independent Media
We are 100% volunteer and depend on your participation to sustain our efforts!