Add an Event
Newswire
Calendar
Features
Home
Donate
From the Open-Publishing Calendar
From the Open-Publishing Newswire
Indybay Feature
Publish to Newswire
Add an Event
Related Categories: Palestine | International
SS Dignity attacked, diverted to Lebanon
by ma'an
Tuesday Dec 30th, 2008 10:29 AM
Former U.S. congresswoman Cynthia McKinney is seen in front of boat before setting sail with boxes of medical supplies aboard, for Gaza from the Cypriot port of Larnaca, Cyprus, Monday, Dec. 29, 2008. Free Gaza Group organizers said their boat 'SS Dignity' would defy an Israeli blockade of Gaza and ferry 16 activists and 3 tons of Cypriot-donated supplies to help treat the wounded from Israeli air attacks against targets in the Palestinian territory.
(AP Photo/Petros Karadjias) 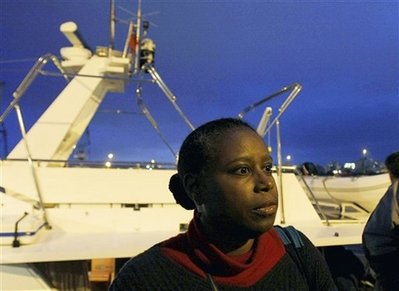 
[Ma'anImages]
Bethlehem - Ma’an - The Free Gaza ship successfully landed and unloaded three tons of medical supplies in the Gaza Port Tuesday, but was assailed by Israeli Naval ships which opened fire on the vessel.

According to organizers of the movement one Israeli gunboat rammed into the SS Dignity on the port bow side heavily damaging the ship at approximately 5am. The Israeli army is reporting that the Dignity was on a collision course and did not alter their route despite warnings that the Gaza Strip was a closed military zone and entry would not be allowed.

Israeli warships are also reported to have fired into the water in front of the Dignity in an effort to prevent the ship from continuing on its way to the Strip. The attack was filmed by journalists on board the boat and the crew and passengers will report more extensively on the event once they reach Lebanon.

Dignity passengers and crew reported that the boat was taking on water and is experiencing engine troubles.

According to the Free Gaza statement the “Dignity was clearly in international waters, 90 miles off the coast of Gaza,” when it was hit by the Israeli boat.

The boat is now 40 miles south of Lebanon where the government has given permission for the boat to land and has promised to assist the passengers if needed. The crew reported that Cyprus sea rescue contacted the boat to offer assistance.

Israeli sources deny firing on the humanitarian vessel and claim the navy offered to assist the passengers of the ship. When the offer was declined the navy “escorted the ship until it exited the state’s territorial waters,” according to one Israeli news agency.

Early reports said the ship was able to dock in Gaza and unload supplies, though this is no longer certain.

http://www.maannews.net/en/index.php?opr=ShowDetails&ID=34389
Add Your Comments
LATEST COMMENTS ABOUT THIS ARTICLE
Listed below are the latest comments about this post.
These comments are submitted anonymously by website visitors.