by anti-zionist
December 29th, 2008, San Francisco. We condemn the missile strikes that have killed hundreds of Palestinians in the Gaza strip as a brutal and murderous form of collective punishment. The strikes in heavily populated areas display a reckless disregard for the civilians of Gaza and are part of an ongoing war by Israel not against Hamas or terrorism, but against the Palestinian people. 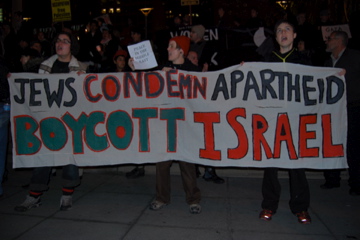 The following text is from a BBC eyewitness report in Gaza City:

“Doctors say the operating rooms are full and the morgues are full and they have no place to put the dead bodies. They are asking for every doctor who is not working today to come and help. We have seen in the streets of Gaza today and this evening many funerals . . . It’s a very bad situation . . . There were Israeli aeroplanes everywhere, hitting everywhere. You could see smoke from north to south, from west to east. The people are really in a panic. The main object for the people now is to find a secure place to secure their family. Gaza has no shelters, it has no safe places. The Hamas security compounds are in the middle of the city - it’s not the kind of place where you see compounds outside the cities.”

This recent offensive against people in Gaza is only the latest in the Israeli government’s continued occupation and ethnic cleansing of Palestinians. With the siege of Gaza Israel has shown a consistent disregard for the human rights of Palestinians leading to an unprecedented humanitarian crisis in the Strip. Malnutrition rivals that found in sub-Saharan Africa, as Gazans cannot receive necessary food, fuel and medical supplies. The effects of the siege will greatly impact the hundreds of civilians injured by the missile strike.

We recognize that the US Government is complicit in these crimes against the people of Palestine. We call on the US government to end its support of the Israeli occupation, to stop the billions of dollars in military aid sent to Israeli, and to end Israel’s criminal raids and siege on the people of Gaza. We gather outside Senator Feinstein’s office to send this message. We stand in solidarity and sympathy with the innocent civilians being bombed in Gaza.

FROM THE INTERNATIONAL JEWISH ANTI-ZIONIST NETWORK:
The world majority stands with the Palestinian people in this devastating time that Israeli Defense Secretary Ehud Barak calls "just the beginning." Israeli attacks on Gaza in the past 24 hours have killed over 200 people and injured hundreds more. We decry the multiple forms of collective punishment currently being inflicted that reflect Israel's 60-plus year history of ethnic cleansing: lack of access to electricity and potable water, blockades of food and medicine, and these brutal attacks.
We are outraged but not surprised by this escalation. Israel's unilaterally designed and implemented disengagement from Gaza has maintained control of the borders, air and water space, and completely isolated Gaza practically and politically. This has been accomplished with unconditional support from the United States and its allies and with the complicity of the broader international community and Gaza's neighbors. It has also set the stage for these horrendous events.
The media frames this violence as a conflict between warring peoples with equal power. This framing is possible because the media fails to recognize Israel as an apartheid State or as a colonial occupying force with one of the most technologically advanced militaries in the world.
The Gaza-based One Democratic State Group has called for "all civil society organizations and freedom loving people to act immediately in any possible way to put pressure on their governments to end diplomatic ties with Apartheid Israel and institute sanctions against it." IJAN stands in solidarity with the people of Gaza and supports this call. 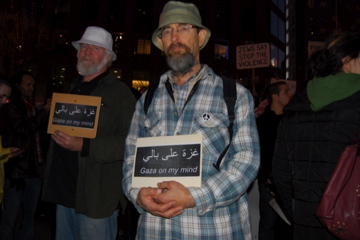 §Gaza is Warsaw
by anti-zionist 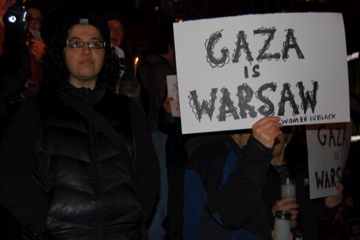 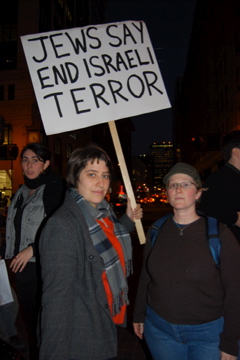 §Stop US Aid to Israel
by anti-zionist 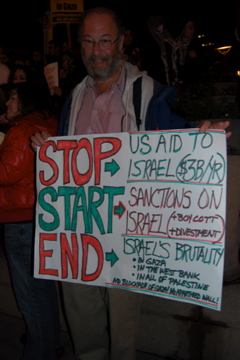 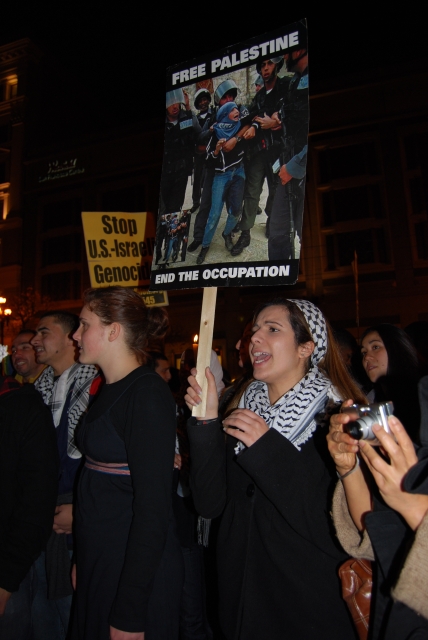 original image (2592x3872)
Add Your Comments
Comments (Hide Comments)
§where the aide goes
by Ilse
I was listening to a centrist talk radio host interview an Israeli consulate or media liaison guy at the SF embassy location talk about events. It was interesting that while he was somewhat supportive, he made a point of not sounding really hawkish or true-believer, and he seemed to say that the strategy is to get their operation done even though there is lots of opposition. Then they will smooth things over later. Anyhow, when they brought up aide to Israel, he immediately pointed out that most of this cash is spent inside the U.S. at military companies, and that it functions more as a stimulus for americans. Does anyone have a spreadsheet of which companies are most prominent? The South Bay is filled with military companies such as Raytheon and Lockheed, but I know we don't send things like large battle ships.
Add a Comment
§thoughts on aide
by ...
i'm not sure it matters where the money is spent, although that would be interesting to know and perhaps reveal domestic targets for protest, but the important thing would be to seek that money simply be cut.

if they don't have it to spend in the US on weapons (as you say the speaker claimed), and they still want those weapons, then they have to dig deeper into their budget to buy those weapons. regardless, they have less money to spend, forcing them to make choices between internal priorities and military priorities, or even between various military priorities. in short, they get less than they'd like to have

if memory serves, the last time the israelis were truly serious about negotiating with the palestinians was when HW Bush cut, or at least threatened to cut, the free $$ the U.S. ships to the israelis every year. apparently that got their attention. clinton, and later W Bush, kowtowed to the israeli lobby, sent the money without real strings, thereby eventually emboldening Sharon to provoke at the al-Aqsa Mosque, and hence the situation has degenerated to the miserable state it is in now

of course, stopping the sales of weapons, on top of ending the revenue stream, from the US would be a one-two punch

until we divest, in cash and hardware, as we did for South Africa in the 80s, israel will have no reason to change its *%&*%ing ways
Add a Comment
§640_6_free_palestine.jpg
by Diana
If you live in the US - how can you talk "bad" about the country you live in?! GO back to where you are from!!!!!!!
Add a Comment
Support Independent Media
We are 100% volunteer and depend on your participation to sustain our efforts!