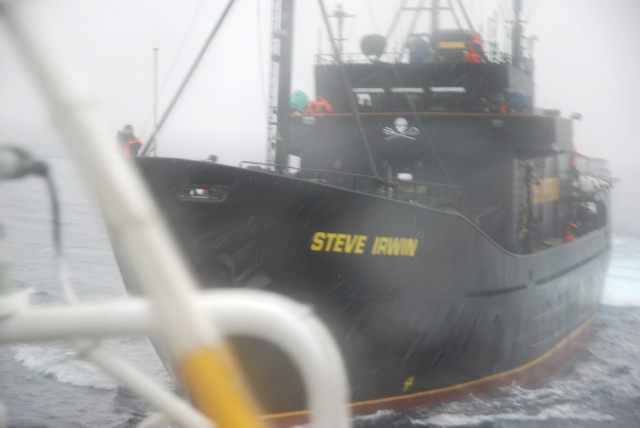 The Haiko Maru emerged from dense fog in front of the Steve Irwin about 0730 GMT December 26th, 2008. Fog conditions had reduced visibility to about 500m.

Australian citizen Jeff Hansen from Perth, Western Australia, delivered a message over the radio in Japanese calling on the Japanese whaling ship to cease whaling operations and leave Australian territorial waters as whaling is illegal under Australian law.

The Kaiko Maru had been undertaking a detour in the ice pack area after completing the day’s research activities, according to the Institute Of Cetacean Research (ICA).

The Steve Irwin pursued and came alongside the Kaiko Maru for anti-whaling activists to throw 10 bottles of rotten butter and 15 bottles of a methyl cellulose and indelible dye mixture.

According to a press release by the Institute Of Cetacean Research "The Steve Irwin rammed the Kaiko Maru from the starboard rear side and spent a number of hours in dangerous close-quarter harassment of the Japanese vessel, repeatedly overtaking and circling the Kaiko Maru."

The ICA confirmed that the "topside starboard rear bulwark was damaged" but the damage is "no hindrance to its present operation and research activities".

After the collision, the Sea Shepherd repeatedly overtook and turned around the Kaiko Maru for approximately three hours, according to the ICA, then the Sea Shepherd ship changed course to the east.

"Our objective now is to chase them out of Australia's Economic Exclusion Zone," said Captain Paul Watson. "I have a chart here and it clearly states that these waters are Australian EEZ. There is an Australian Federal Court Order specifically prohibiting these ships from whaling in these waters. We have informed the whalers they are in contempt of this Court ruling."

Captain Paul Watson outlined the legal arguments for their actions to stop whaling in 2005 saying:

It is not illegal to interfere on the high seas against their illegal whaling activities. In fact, we are legally authorized to do so in accordance with the U.N. World Charter for Nature.

States and, to the extent they are able, other public authorities, international organizations, individuals, groups and corporations shall Safeguard and conserve nature in areas beyond national jurisdiction.

"This is what we are doing in the waters of the Southern Ocean. We are acting as individuals and non-governmental organizations to uphold international conservation law for the purpose of protecting the environment. In so doing, we are challenging a rogue pirate nation intent upon arrogantly violating international conservation law." said Paul Watson.

"Minke whale being processed for whale meat. The crime here is the illegal slaughter of thousands of whales. There is no such thing as “research whaling,” and even if there was, it is still not legal." said Watson 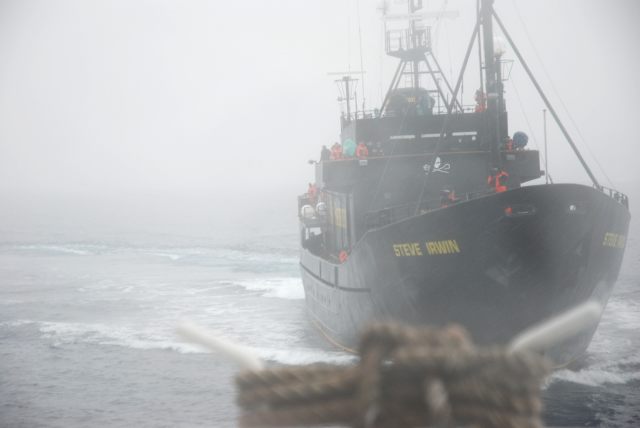 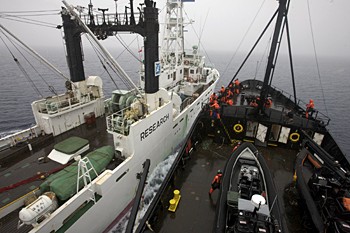 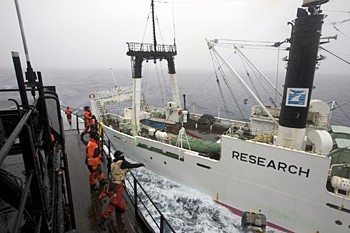 Photo: Eric Cheng / Sea Shepherd
Add Your Comments
Support Independent Media
We are 100% volunteer and depend on your participation to sustain our efforts!