Ann Packer and Lan Tran at Writers With Drinks 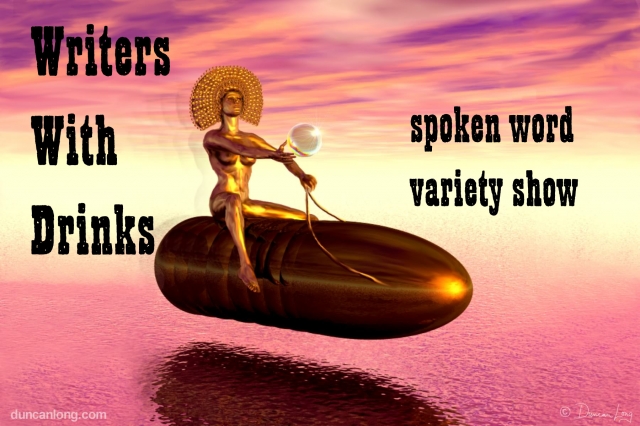 Ann Packer is the author of Songs Without Words, The Dive From Clausen's Pier, and Mendocino and Other Stories. She's had a story in the O. Henry Awards prize stories collection and the New Yorker, and won an NEA grant.

Lan Tran's solo show, How To Unravel Your Family, played before a sold-out audience at Lincoln Center, and her latest show "Elevator/Sex" played at the West End Theater. Her work has frequently appeared on NPR and in anthologies such as Waking Up American.

Yosefa Raz's poetry has appeared in ZYZZYVA, Gumball Poetry, Tikkun and Glimmer Train. Her first poetry collection, In Exchange For A Homeland, was published by Swan Scythe Press.

Scott Sigler's novels include Infected, Contagious, EarthCore and Ancestor. His short story "Sacred Cow" was made into an online mini-movie by StrangerThings.TV.

Steven Schwartz is the author of a chapbook of 69 stories, called 69. His stories have appeared in Tough Girls, 5 Minute Erotica, Best Bisexual Erotica 2 and Wired Hard, among other places.

END_OF_DOCUMENT_TOKEN_TO_BE_REPLACED
Added to the calendar on Wed, Dec 24, 2008 1:52PM
Related Categories: San Francisco | Media Activism & Independent Media
Add Your Comments
Support Independent Media
We are 100% volunteer and depend on your participation to sustain our efforts!