by Dennis Miller
Tom Cruise is asking for your Valkyrie movie ticket dollars, but spends his money to fund a cult with a similar attitude towards lesser races and global domination. Should the actor be separated from his actions? As a producer of the movie, he earns money from every ticket. Should you care where that money is going? 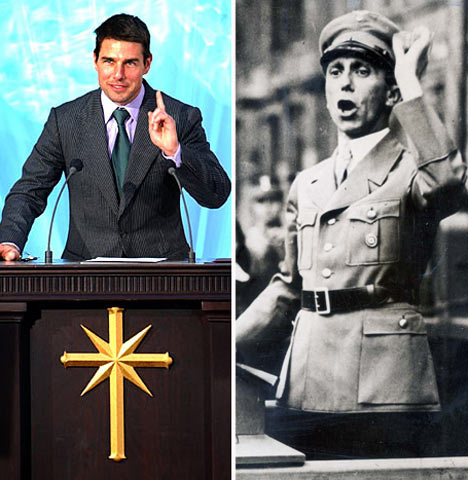 With not one but three WWII movies out this fall, Jewish moviegoers will be lining up to see at least one of them. Will it be the sophisticated Ralph Fiennes movie The Reader? Or the story of Jewish partisans who founded a resistance in the woods in Defiance? Or the story of the failed assassination attempt on Hitler starring that nice young man who danced in his underwear for us in Risky Business and did impossible things in Mission Impossible?

Valkyrie is getting by far the most press and promotion after being moved up to a December 25th opening to qualify for a 2008 Academy Award in a particularly weak Academy year. Not all of the press has been good for this historical drama with a lead star unable to replicate a German accent for his German role, but a more sinister element has plagued this movie since its inception, when Tom Cruise was cast as Claus von Stauffenberg, a Nazi who attempted to kill Hitler with a briefcase bomb in 1944.

German politicians and the Stauffenberg family immediately objected to Cruise’s casting in the film. Scientology, which Cruise adheres to and actively promotes (and he is also very close to its head, David Miscavige), is considered a dangerous, totalitarian cult in Germany, which has strict laws about the promotion of any such cults. Scientology texts are banned in schools; Scientologists must send their children to Danish schools across the border. The German government went so far as to ban the use of historical sites related to the actual events of 1944 for filming the movie because of Cruise’s involvement, though repeated attempts by United Artists eventually got the motions overturned. Berthold von Stauffenberg, the son of Cruise’s character, said in a public statement, “Cruise should keep his hands off my father.” Thomas Gandow, a spokesperson for the German Protestant Church, said Cruise's involvement in the film would "have the same propaganda advantages for Scientology as the 1936 Olympics had for the Nazis" and compared the actor to Nazi propaganda minister Joseph Goebbels.

Goebbels is a name Cruise has invoked several times in reference to one of his own enemies: psychiatrists. Scientologists believe, according to the writings of founder L. Ron Hubbard (who died with a psychiatric drug in his system), that Hitler used a secret cabal of psychiatrists to develop his eugenics program to eliminate European Jewry and other undiserables. The modern institution of psychiatry was created by Jews who learned their practices from their experiences in the Death Camps. In Los Angeles the Scientologists have a permanent exhibit and an additional one that travels around the world called “Psychiatry: An Industry of Death,” which uses footage from concentration camps to back its claim that psychiatry is not only an unsafe medical practice but a secret society of death cultists. Actual church texts, barred from public display but now available on Wikileaks from ex-Scientologists, reveal that high-level Scientologists (such as Cruise) believe that psychiatrists have been operating for millions of years and were the ones who convinced the evil Lord Xenu (ruler of the Galactic Confederation) to execute the “lesser” alien races and implant their souls, or “thetans,” into the Cro-Magnon humans 75 million years ago. To this day, every human body is occupied by a thetan, as well as clusters of pesky homeless souls known as “body thetans,” which are responsible for all of our anger, fears, and illness. And only Scientology’s non-medically-certified practices of vitamin supplements and counseling sessions can remove their souls from our bodies.

Cruise is not full of alien thetans, of course. He is an Operating Thetan Level VII, meaning not only has he read and come to believe all stated above, but he is no longer a normal, lesser human. He is a “Homo novis” instead of a Homo sapiens. He is a superior race, made possible by the wonders of Scientology. Other members of this superior race include John Travolta and Jenna Elfman.

Scientology has a concept called “clearing the planet,” an effort all Scientologists are meant to be working towards. This means the elimination of body thetans (and thereby suffering) via the elimination of false ideas and creeds. Since all religions are a result of Lord Xenu’s brainwashing of the dead alien souls (known as Event Level II in Scientology’s timeline), they can be logically disproved through hours of expensive counseling at your local Scientology center and – most important – by going off any psychiatric medication you may be taking. Three people are known to have died this year by committing suicide after seeking Scientology counseling. In Israel, the TV show “Friday’s Studio” this year on Scientology, describing it as “the largest cult in Israel” and investigating the death of a Scientologist who committed suicide. (A Scientology spokeswoman called the suicide “unrelated” to his recent counseling sessions with her.) A version with English subtitles is available on YouTube. (http://www.youtube.com/watch?v=O7FZMxnltNA) (http://www.youtube.com/watch?v=Y55qINpK … re=related)

Before his death, L. Ron Hubbard wrote extensively about the importance of “clearing the planet” and how to go about doing so. First was to establish a world of “clears” – i.e., Scientologists who have taken enough courses to become Homo novises and spent enough money to be considered free of body thetans. “It is not necessary to produce a world of clears in order to have a reasonable and worthwhile social order; it is only necessary to delete those individuals who range from 2.0 down, either by processing them enough to get their tone level above the 2.0 line...or simply quarantining them from the society.” (L. Ron Hubbard, The Science of Survival, p. 157) People who are “low on the tone scale” – which includes people who are not Scientologists – should be handled. “There are only two answers for the handling of people from 2.0 down on the tone scale, neither one of which has anything to do with reasoning with them or listening to their justification of their acts. The first is to raise them on the tone scale by un-enturbulating some of their theta by any one of the three valid processes. The other is to dispose of them quietly and without sorrow….The sudden and abrupt deletion of all individuals occupying the lower bands of the tone scale from the social order would result in an almost instant rise in the cultural tone and would interrupt the dwindling spiral into which any society may have entered.” (L. Ron Hubbard, The Science of Survival, p. 157)
Many regard Scientology as a silly alien cult, to be laughed at but generally ignored. Should it bother us that tens of thousands of active Scientologists are reading The Science of Survival and actively working towards Hubbard’s goal of a “clear” planet? Should it bother us that the Church of Scientology uses celebrities like Tom Cruise to promote its self-help techniques without revealing the sinister material available only to top members?

What, then, does a modern totalitarian cult have to do with the movie Valkyrie? Why was Cruise so eager to cast himself in a Nazi role, though admittedly a Nazi who turned “good” in his last two years and became a postwar celebrated hero for Germany? Cruise is playing out his fantasy – he is the insurgent fighting the war against the Real Evil™. In the film – which your money will support (with a portion of the proceeds going to his bank account, from which he will then donate generous amounts to Scientology, as he did recently by buying them a castle in Italy to use as a Scientology retreat), he tries to destroy Hitler, whom you will recall is now established by Scientology historians to have been controlled by psychiatrists. Cruise is fighting the real enemy – a legitimate medical profession. Run by members of the Galactic Confederation.

Tom Cruise is one of the highest-paid actors in Hollywood, even with his anti-Semitic portrayal of a Hollywood producer (complete with gold star necklace) in Tropic Thunder. Is having his money go toward funding studies linking the Holocaust to modern medicine worth the price of your movie ticket?