by Hans Bennett
Watch Journalists for Mumia's video report from Dec. 6, 2008 in Philadelphia plus extended footage of the crime scene presentation (download presentation flyer). Below is an online summary of the flyer and presentation.

TOP PHOTO: THE MISSING TAXI: On Dec. 8, 2007, Journalists for Mumia gave a slide show presentation of the newly discovered crime scene photos, that were taken by press photographer Pedro Polakoff. This photo being presented, at the far right, shows the very back of Police Officer Daniel Faulkner’s police car. The large, empty space directly behind it, is where alleged “eye-witness” Robert Chobert testified he was parked, as he “witnessed” the shooting of Officer Faulkner. 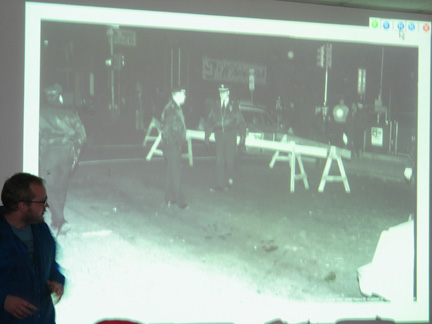 Where Was Robert Chobert's Taxi?

Even More Evidence of a Police Frameup of Mumia Abu-Jamal

“Chobert told me that on December 9, 1981, he had actually been parked, in his taxi, on 13th Street, north of Locust. (This contradicted his trial testimony that he was parked behind Officer Faulkner’s police car on Locust St., east of 13th Street.) Chobert told me that he did not see anyone standing over a prone Officer Faulkner, firing shots at the officer. Chobert said that what actually happened was that he was sitting in his taxi when he heard gunfire. He exited the taxi and saw a Black male standing next to a police car that was parked on Locust, east of 13th Street. The Black male slumped down. Chobert walked toward that area and when he got closer saw a police officer sprawled on his back on the sidewalk and a Black male sitting nearby. (This contradicted Chobert’s trial testimony that he saw Mumia Abu-Jamal standing over a prone Officer Faulkner and firing shots at him.) I promptly reported Chobert’s recantation to Leonard Weinglass.”

--Sept., 2001 affidavit by George Michael Newman, regarding his 1995 interview with Robert Chobert. For unexplained reasons, Newman was not called to testify, and the content of this interview was not presented at the 1995 PCRA hearing.

The newly discovered crime scene photos, taken by press photographer Pedro Polakoff, clearly show several acts of police misconduct. One photo (featured to the right) strikes a major blow to the case against Mumia, because it shows that alleged eye-witness Robert Chobert was not actually parked behind PO Faulkner’s car as he testified. This photo gives further credence to the above account of George Michael Newman, who says that Chobert told him he was actually parked around the corner, on 13th St., north of Locust St.

Another crime scene photo (not taken by Polakoff) has recently emerged in a You Tube online video that is anti-Mumia. While it is difficult to be 100% certain, it appears to show the exact spot where Chobert may have actually been parked!

Chobert testified that he was in his taxi and writing in his log book when he heard the first gunshot and looked up. He said that he did not see a gun in Mumia’s hand, or a muzzle flash, but he did see him standing over Faulkner, saw his hand “jerk back” several times, and heard shots after each “jerk.” After the shooting, Chobert got out and approached the scene.

Even without Newman’s 2001 affidavit and the new photos, Chobert’s account was already full of contradictions, casting serious doubt on whether Chobert was honest about what he’d seen, or whether he had even witnessed the shooting at all.

Suspiciously, no official eyewitness reported seeing the DA’s star witness, Cynthia White, at the scene, and White is the only “witness” to report seeing Chobert’s taxi parked behind Officer Faulkner’s police car.

Amnesty International has documented that both Chobert and White “altered their descriptions of what they saw, in ways that supported the prosecution’s version of events.”

Initially, Chobert reported that the shooter ran away at least 30-35 “steps,” but at trial, he changed this to 10 “feet,” which was closer to the official police account that Mumia was found just a few feet away from Officer Faulkner.

However, Chobert stuck to a few of his contradictory statements at trial.

For example, he did not notice the Ford parked in front of Billy Cook’s VW.

He claimed that the altercation happened behind Billy Cook’s VW (it actually happened in front of Cook’s VW).

He claimed he did not see Mumia get shot or see Officer Faulkner fire his gun.

At prosecutor McGill’s request, Judge Sabo blocked the jury from knowing that Chobert was on probation for throwing a molotov cocktail into a school yard, for pay. Sabo justified this by ruling that it was not crimen falsi, ie. a crime of deception. Subsequently the jury never heard about this, or that Chobert was illegally driving on a suspended license (revoked for a DWI). This probation violation could have given him up to 30 years in prison, so he was extremely vulnerable to pressure from the police.

First, while being so legally vulnerable, why would Chobert have parked directly behind a police car, where he could possibly interact with the police?

Second, why would he have left his car and approached the scene, if in fact the shooter was still there? Lindorff suggests that “at the time of the incident, Chobert might not have thought that the man slumped on the curb was the shooter,” because “in his initial Dec. 9 statement to police investigators, Chobert had said that he saw ‘another man’ who ‘ran away’…He claimed in his statement that police stopped that man, but that he didn’t see him later.” Therefore, “if Chobert did think he saw the shooter run away, it migh well explain why he would have felt safe walking up to the scene of the shooting as he said he did, before the arrival of police.” 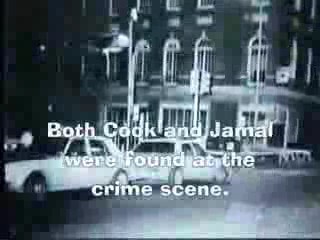 IS THIS CHOBERT’S TAXI? This crime scene photo appeared on a recent anti-Mumia You Tube video. The photo is apparently taken from 13th St., north of Locust, and facing south towards Locust St. This is exactly where investigator George Michael Newman states that Chobert told him he was actually parked. So, is the car on the left Chobert’s taxi?
END_OF_DOCUMENT_TOKEN_TO_BE_REPLACED
§The Crime Scene
by Hans Bennett 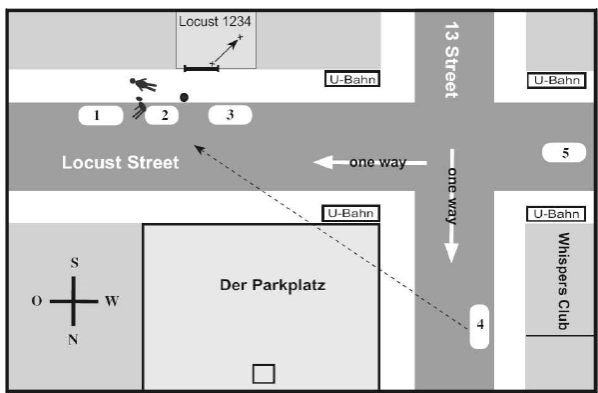 (4) Mumia’s car (5) Scanlan’s car (Short Arrow at 1234 Locust) The trajectory of the bullet inside the vestibule (Long Arrow From 4) Mumia’s direction approaching the scene. Note that Mumia’s direction is in contradiction to the bullet trajectory and the fragments found in the wall. Officer Faulkner was more likely shot in the back by someone standing on the curb next to Billy Cook’s car (2), with the bullet traveling North, away from 1234 Locust, after exiting Officer Faulkner’s body.
END_OF_DOCUMENT_TOKEN_TO_BE_REPLACED
§The bullet(s)?
by Hans Bennett 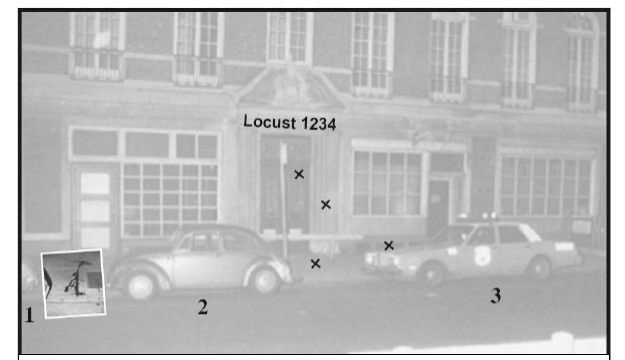 The straight arrow shows where Police Officer Daniel Faulkner was allegedly standing and the direction he was facing when shot. The curved line shows Mumia’s approach before allegedly shooting Faulkner. Accordingly, while Faulkner was standing in front of Billy Cook’s VW and facing west up Locust St., Mumia passed by Faulkner’s right side and looped around before shooting him in the back.
END_OF_DOCUMENT_TOKEN_TO_BE_REPLACED
§Cynthia White's account at Billy Cook's trial
by Hans Bennett

The straight arrow shows where Police Officer Daniel Faulkner was allegedly standing and the direction he was facing when shot. The curved line shows Mumia’s approach before allegedly shooting Faulkner. Accordingly, while Faulkner was standing in front of his police car and facing east down Locust St., Mumia came in front of Faulkner and looped around before shooting him in the back.
END_OF_DOCUMENT_TOKEN_TO_BE_REPLACED
§The Missing Divots
by Hans Bennett 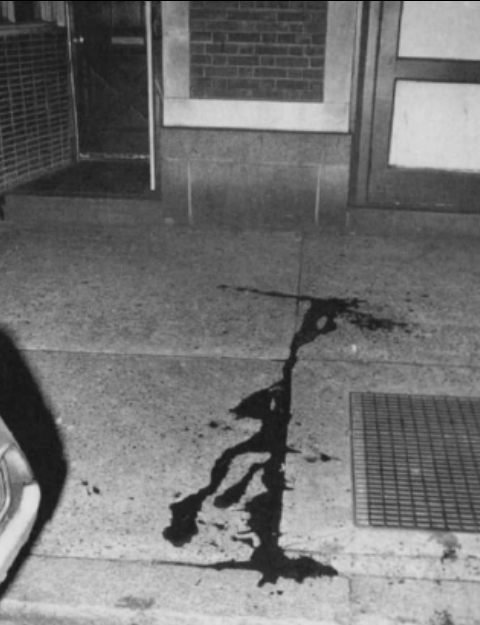 Complementing the newly discovered crime scene photos taken by press photographer Pedro Polakoff, this official police crime scene photo (not taken by Polakoff) shows that on the sidewalk, where Officer Faulkner was found, there are no large bullet divots, or destroyed chunks of cement, which should be visible in the pavement if the prosecution scenario was accurate, according to which Abu-Jamal shot down at Faulkner at close range – and allegedly missed several times – while Faulkner was on his back. German author Michael Schiffmann writes: “It is thus no question any more whether the scenario presented by the prosecution at Abu-Jamal’s trial is true. It is clearly not, because it is physically and ballistically impossible.”
END_OF_DOCUMENT_TOKEN_TO_BE_REPLACED
Add Your Comments
Latest Comments
Listed below are the latest comments about this post.
These comments are submitted anonymously by website visitors.
TITLE
AUTHOR
DATE
MIZZZ
Marcia Everett
Support Independent Media
We are 100% volunteer and depend on your participation to sustain our efforts!