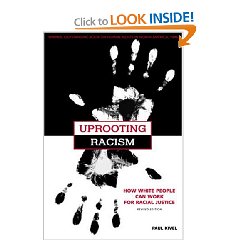 --[(This is something of an outline of how the conversation went with
Paul Kivel, author of Men's Work, Uprooting Racism, and You call this a Democracy? I have summarized my questions from my notes, not transcribed the interview or Paul Kivel's responses)]--

-----
I'm hoping to start with some of the basics of "Uprooting Racism" -- a bit of history about the book and the projects that inspired it, what's changed since 1996 when the book was published, etc.

I'd also like to talk about the word 'progress'-- as part of the idea that racism has "gotten better." From my perspective "better" is largely irrelevant (and not to mention extremely subjective/relative), so whether racism is 'better' or not is beside the point, since it still exists. It's simply changed. It hasn't gone away, it's evolved, but the fact that it's still with us, which of course means we haven't been successful in dismantling white supremacy or the white male christian ruling class to be more exact

As a parent, raising children to counter the extremely strong pull towards racism is of course challenging...

As a white person - building trust rather than endlessly discussing whether its valid or true: BEYOND DIALOGUE - action

privilege of picking a topic or battle - pitfalls
as a white organizer - white anti-racism as a movement, as a grouping, as an identity even as an industry... 'not an identity: a practice'
the ah ha moment: again, it comes from action not discussion. not a workshop, a movement // 'with the leadership of people of color' // // (sidelines & involvement, ally & gatekeeper: it all comes back to building trust)

From there, I want to touch on your other works, Men's Work in particular, and the intersections between racist violence and gender violence. plus history and process of publishing the book.

How to get involved: same directive--deal with it amongst your own community. I've talked with folks who feel that there's a contradiction there: organize white men. now why aren't your organizations made up of people of color? why are women underrepresented?

School curriculum: violence prevention as roots rather than pruning the fruit

Local v Global: momentum along those lines (institutional). the COR coalition's goals: training AS PART OF A LARGER PLAN, with measurable outcomes. with actual accountability

times is tough: corporate collapse has disparate effects as well, and things might be getting a whole lot worse for *certain* people. Every community faces these realities--but i want to ask you specifically about oakland, about
impacts of employment etc. gentrification. I ask this because of exactly what you said: it isn't that different! Things are certainly getting worse, but in certain communities, unemployment ain't no new thing... questions of local autonomy; schools, hotel workers, gentrification & mortage collapse:
on a global scale. streets of oakland -> exploitation of global south or africa or ...
resisting the same system.

looking to resistance & liberation movements intern'lly we see a different set of tactics. how do we look out with some self awareness and critique?

Wrap-up:
Countering the invisibility; destroying the complacency; it's not about going out; overcoming the paralysis; what's my role 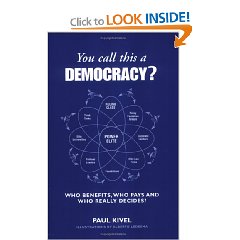