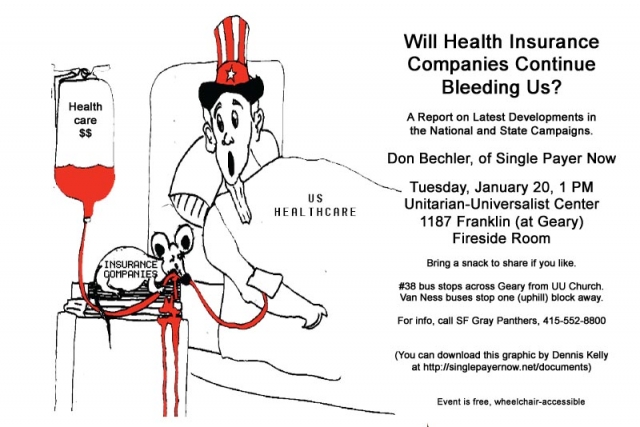 Obama, Congressional Democrats, and a powerful coalition of business, some unions, and some healthcare advocates are behind a plan for covering the uninsured by expanding, regulating, and subsidizing private insurance.

This is exactly what we do not need. Despite the media hype, this plan has been a disaster in Massachusetts. (See below) We need Single Payer: equal, comprehensive, affordable, and accessible healthcare for everyone, delivered by today’s doctors, clinics, and hospitals, and paid for by a publicly-accountable government agency. Insurance companies are nowhere in the picture.

Don Bechler, of Single Payer Now, will report on the national and state campaigns for single payer healthcare.

The other good news is that in California, SB 840 is entering a new legislative phase with Mark Leno as chief author. Leno emphasizes that even if SB 840 passes and is signed, it will face a state ballot challenge from private insurers, so we need to prepare for a grass-roots campaign.

We will focus on how we can take advantage of these opportunities.

Added to the calendar on Tue, Dec 16, 2008 3:34AM
Add Your Comments
Support Independent Media
We are 100% volunteer and depend on your participation to sustain our efforts!