by DemocracyNow.org via Ecotopian Yeti
The window dressing of American human rights violations 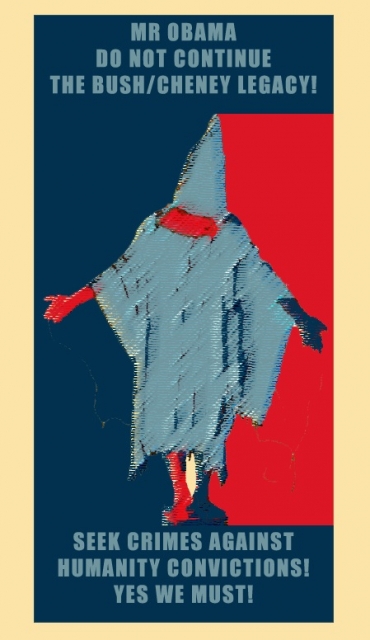 John Brennan and Jami Miscik, both former intelligence officials under George Tenet, are leading Barack Obama’s review of intelligence agencies and helping make recommendations to the new administration. Brennan has supported warrantless wiretapping and extraordinary rendition, and Miscik was involved with the politicized intelligence alleging weapons of mass destruction in the lead-up to the war on Iraq. We speak with former CIA analyst Melvin Goodman and Michael Ratner of the Center for Constitutional Rights. [includes rush transcript]
Guests:
Melvin Goodman, Former CIA and State Department analyst. He is a senior fellow at the Center for International Policy and director of the Center’s National Security Project. His latest book is Failure of Intelligence: The Decline and Fall of the CIA. He is also co-author of the book,Bush League Diplomacy: How the Neoconservatives are Putting the World at Risk.
Michael Ratner, President of the Center for Constitutional Rights. His latest book is The Trial of Donald Rumsfeld: A Prosecution by Book.
AMY GOODMAN: It’s been less than two weeks since Obama’s election. Speculation is already rife about the change he intends to bring to Washington’s intelligence community. The Washington Post reported last week that Obama is expected to replace the country’s top two intelligence officials over their support for controversial Bush administration policies like torture and electronic surveillance. Director of National Intelligence Mike McConnell and CIA chief Michael Hayden reportedly wish to remain on the job.

No appointees have been named as yet, but questions are already being raised about the people heading Obama’s transition efforts on intelligence policy. John Brennan and Jami Miscik, both former intelligence officials under George Tenet, are leading the review of intelligence agencies and helping make recommendations to the new administration. Brennan has supported warrantless wiretapping and extraordinary rendition, and Miscik was involved with the politicized intelligence alleging weapons of mass destruction in the lead-up to the war on Iraq.
I’m joined now by Washington, D.C.—in D.C. by former CIA and State Department analyst Mel Goodman. He’s a senior fellow at the Center for International Policy, director of the Center’s National Security Project. His latest book is called Failure of Intelligence: The Decline and Fall of the CIA. He is also co-author of Bush League Diplomacy: How the Neoconservatives are Putting the World at Risk.
We’re joined here in New York by Michael Ratner, president of the Center for Constitutional Rights. His latest book is The Trial of Donald Rumsfeld: A Prosecution by Book.
We welcome you both to Democracy Now! I want to start with Mel Goodman in Washington. Long years at the Central Intelligence Agency and the State Department. You’ve just written an op-ed piece in the Baltimore Sun that looks at these two top transition officials. Explain who they are and what they represent.
MELVIN GOODMAN: Well, I think it’s important to understand who John Brennan is. He—[no audio]
AMY GOODMAN: We seem to have lost the sound, Mel Goodman. Let’s see if we—if we have it back. Mel, can you hear us?
MELVIN GOODMAN: Can you hear me?
AMY GOODMAN: Hi. Can you hear us, Mel Goodman?
MELVIN GOODMAN: I can hear you fine.
AMY GOODMAN: OK, good. Now we hear you fine. So just start from the top. Talk about Brennan.
MELVIN GOODMAN: OK. John Brennan was deputy executive secretary to George Tenet during the worst violations during the CIA period in the run-up to the Iraq war, so he sat there at Tenet’s knee when they passed judgment on torture and abuse, on extraordinary renditions, on black sites, on secret prisons. He was part of all of that decision making.
Jami Miscik was the Deputy Director for Intelligence during the run-up to the Iraq war. So she went along with the phony intelligence estimate of October 2002, the phony white paper that was prepared by Paul Pillar in October 2002. She helped with the drafting of the speech that Colin Powell gave to the United Nations—[inaudible] 2003, which made the phony case for war to the international community.
So, when George Tenet said, "slam dunk, we can provide all the intelligence you need,” [inaudible] to the President in December of 2002, it was people like Jami Miscik and John Brennan who were part of the team who provided that phony intelligence. So what I think people at the CIA are worried about—and I’ve talked to many of them over the weekend—is that there will never be any accountability for these violations and some of the unconscionable acts committed at the CIA, which essentially amount to war crimes, when you’re talking about torture and abuse and secret prisons. So, where are we, in terms of change? This sounds like more continuity.
AMY GOODMAN: I want to turn to excerpts from a December 2005 interview with John Brennan, the former CIA official now leading Obama’s intelligence transition. Brennan was interviewed by Margaret Warner on the NewsHour with Jim Lehrer about his views on the Bush administration’s practice of extraordinary rendition.

• MARGARET WARNER: So, was Secretary Rice correct today when she called it a vital tool in combating terrorism?

• JOHN BRENNAN: I think it’s an absolutely vital tool. I have been intimately familiar now for the past decade with the cases of rendition that the US government has been involved in, and I can say, without a doubt, that it has been very successful as far as producing intelligence that has saved lives.

• MARGARET WARNER: So is it—are you saying both—in two ways, both in getting terrorists off the streets and also in the interrogation?

• JOHN BRENNAN: Yes. The rendition is the practice or the process of rendering somebody from one place to another place. It is moving them. And US government will frequently facilitate that movement from a country to another.

• MARGARET WARNER: Why would you not, if this—if you have a suspect who’s a danger to the United States, keep him in the United States’ custody? Is it because we want another country to do the dirty work?

• JOHN BRENNAN: No, I don’t think that’s it at all. Also, I think it’s rather arrogant to think that we’re the only country that respects human rights. I think that we have a lot of assurances from these countries that we hand over terrorists to that they will in fact respect human rights. And there are different ways to gain those assurances. But also, let’s say an individual goes to Egypt, because they’re an Egyptian citizen, and the Egyptians then have a longer history, in terms of dealing with them, and they have family members and others that they can bring in, in fact, to be part of the whole interrogation process.

AMY GOODMAN: Mel Goodman, I want to thank you for being with us, former CIA and State Department analyst. His latest book is called Failure of Intelligence: The Decline and Fall of the CIA.

http://www.democracynow.org/2008/11/17/obama_taps_ex_cia_officials_tied
§Torture Yes We Can
by DemocracyNow.org via Ecotopian Yeti 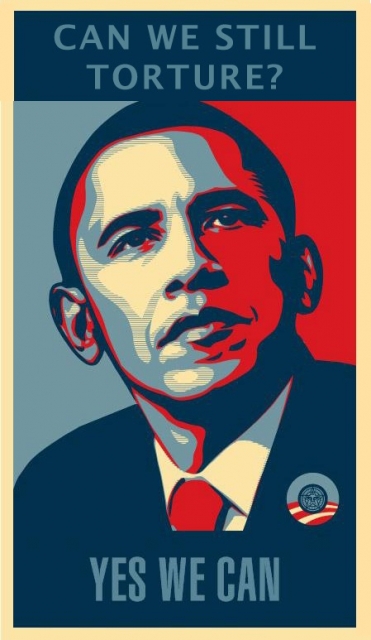 original image (449x773)
Add Your Comments
Latest Comments
Listed below are the latest comments about this post.
These comments are submitted anonymously by website visitors.
TITLE
AUTHOR
DATE
EVIL & CORRUPTION, THE FOUNDATION OF AMERICAN POLITICS
GERAL
Democrats always sell us out
Paul Burton
Support Independent Media
We are 100% volunteer and depend on your participation to sustain our efforts!