Detroit, MI— Along with environmentalists across the country, the North American Earth Liberation Front Press Office (NAELFPO) is denouncing the government’s consideration of a bailout package for the failing U.S. automaker, General Motors.

"General Motors deserves bankruptcy. Fully aware of America’s dependence on foreign oil and the horrific environmental impact of the Hummer — an 8,500-pound monstrosity that yields an average of 10-mpg — GM continued producing gas-guzzling, polluting vehicles while foreign automakers were developing smaller, lighter, more fuel-efficient and environmentally-friendly cars,” states Jason Crawford, one of four new press officers for the NAELFPO, “GM failed to look to the future and, for that, they deserve to fare no better than the many species they’ve helped push to the brink of extinction.”

This summer, when U.S. gas prices hit an all-time high, GM announced its Hummer division was up for sale in an effort to sell off $4 billion worth of its assets to avoid bankruptcy. Ironically, while GM was spending $1 billion to build up the Hummer franchise, Toyota was spending $1 billion to develop a high-mileage, less-polluting hybrid. “Perhaps if GM hadn’t killed their electric car in the late 1990s to bring the Hummer into the commercial marketplace,” added Crawford, “they wouldn’t presently be asking the tax-payers for a welfare check.”

“Unfortunately, future generations who will suffer the consequences of air pollution, resource scarcity, and global warming won’t have the luxury of a government rescue,” continued Crawford. “Tomorrow we’re going to be paying the price — both ecologically and financially — for GM’s faulty business model. Instead of targeting Hummer and SUV dealerships over the last few years, the ELF should have put General Motors out of business years ago with well-placed incendiary devices in Detroit.”

The Earth Liberation Front, or ELF, is an international, underground movement consisting of
autonomous groups of people who engage in direct actions to protect the planet. Formed in 1992
in Brighton, England as an offshoot of the Earth First! movement, the ELF has been active in
the United States since 1996.

Notorious ELF actions have included the $24 million arson attack at Colorado's Vail Ski Resort in 1998 and a $1 million fire set at a West Covina, CA dealership that damaged over 40 Hummers and SUVs in August 2003. In the last ten years, the ELF has caused over $150 million in damages to environmentally destructive corporations without causing a single injury. Since 2001 the ELF has been considered the top domestic terror threat by the F.B.I. 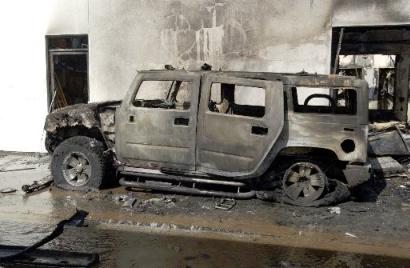 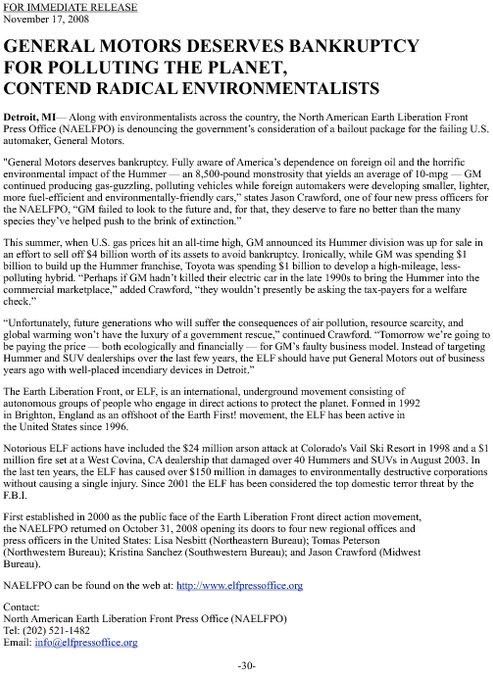 Download PDF (58.7KB)
END_OF_DOCUMENT_TOKEN_TO_BE_REPLACED
Add Your Comments
Support Independent Media
We are 100% volunteer and depend on your participation to sustain our efforts!