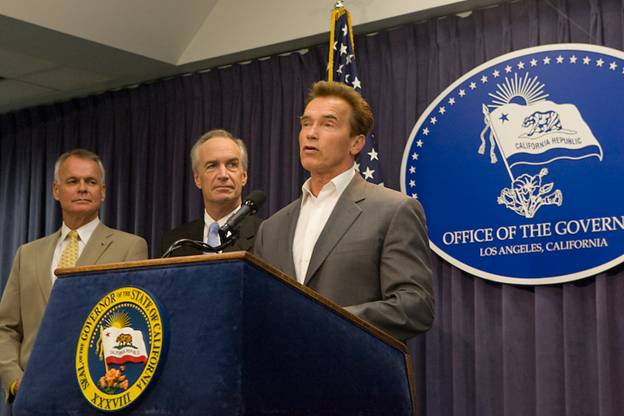 Is Schwarzenegger Trading Klamath Dam Removal for the Destruction of the Delta?

True to his role as the "Fish Terminator," the Governor used a press conference that he appeared at with Interior Secretary Dirk Kempthorne and Mike Chrisman, California Secretary of Resources, in Los Angeles Friday to promote building new dams in California the day after an agreement in principle was reached between Oregon, California, PacifiCorp and the Bush administration over Klamath Dam removal.

"We are here today to celebrate something really big, which is a great victory for the environment of California," Schwarzenegger gushed. "With the Klamath River Agreement we are making actual history, because this will be the biggest dam removal project ever in the history and the biggest one in the United States. So this is great for California and this is really great also for Oregon."

He then touted the tentative pact as a consensus-style, win-win situation for the Klamath Basin. "And I'm very proud that everyone here worked together, because something like this cannot be done if not everyone is cooperating and working together, if it is environmentalists, if it is the farmers, the Native American tribes, salmon fishermen, the state and the federal agencies, the PacifiCorp, everyone, and I want to thank them all for their great cooperation. Everyone cares so much about the magnificent river and also the water quality and the fish population, and that is why this came about," Schwarzenegger gushed.

After making that statement, of course, Schwarzenegger just had to promote building new dams and sub-surface water storage, although he didn't specifically mention "improved conveyance" - the peripheral canal. In numerous press conferences and photo opportunities over the past two years, Schwarzenegger and Senator Dianne Feinstein have campaigned for a water bond measure that would two new unneeded reservoirs, Temperance Flats on the San Joaquin River and Sites on the west side of the Sacramento Valley, in spite of the fact that water in both watersheds is dramatically over-appropriated already and the chances are that these dams would never fill anyway.

"Now, let me just say that we all know that we have a very serious water problem in California and, of course, we want to make sure that we build more water storage, above-the-ground and below-the-ground water storage, but they have to be strategically located," stated Schwarzenegger, changing from his role as the "Green Governor" to "Arnold the Dam Builder."

"So this is why it is important that we continue building those, even though we want to take four down," Scharzenegger claimed. "I've been worried, of course, about our declining salmon population, and with this agreement here we are setting the stage for the return of the historic salmon runs on the Klamath River."

Missed in most media reports of the agreement is Schwarzenegger's expectation that this agreement could become a "quid pro quo" to sacrifice the California Delta fish and Central Valley chinook salmon species, now in an unpredented state of collapse, for removing dams on the Klamath.

A coalition of recreational anglers, commercial fishermen, Indian Tribes, conservationists and Delta farmers is strongly opposing Schwarzenegger's campaign to put a water bond including a peripheral canal and more dams on the ballot this coming year. Although massive opposition to dams and the canal prevented the Governor and allies from putting the proposal on the November ballot, dam and canal opponents fear that he and his corporate agribusiness backers will try to get the water bond on the June ballot.

Supporters of fish restoration in the Central Valley and the Delta fear that the water bond will result in building the infrastructure to increase water exports out of the Delta to Southern California and drainage-impaired land on the west side of the San Joaquin Valley. Central Valley chinook salmon, Delta smelt, longfin smelt, threadfin shad, striped bass and other fish populations have crashed in recent years, due to record increases in water exports, declining water quality and other factors. More dams and a peripheral canal would only exacerbate the deplorable condition of Delta fish and Central Valley chinook salmon, fish advocates point out.

"If the data collected during the next four years shows that removal is environmentally prudent, the target for removing all four of the dams is the year 2020," said Kempthorne. "I appreciate the great leadership of Governor Schwarzenegger not only for staying at the table for these negotiations, but also for providing a platform by which Californians and Oregonians will have a future in the Klamath Basin through the restoration agreement."

The Yurok, Karuk and Klamath Tribes, California Trout, Trout Unlimited, the Pacific Coast Federation of Fishermen's Associations, American Rivers, two farming organizations and other conservation groups are touting the pact, after several long years of negotiations in the parallel Klamath Basin Restoration Agreement process, as being an important first step toward dam removal and the restoration of the declining salmon runs of the Klamath River.

The Hoopa Valley Tribe, North Coast Environmental Center and Oregon Wild are opposing the agreement for a variety of reasons, most notably because the agreement is non-binding and unenforceable and could become a bailout for Klamath Basin agriculture.


Friends of the River Questions Pact

Friends of the River, a statewide conservation organization based in Sacramento, is critical of the agreement for a multitude of reasons, including the timing of the agreement's release as well as its controversial content, including the linking of Klamath Restoration to Schwarzenegger's water bond proposal.

"The actual agreement did not become available to all Klamath settlement stakeholders until the afternoon of November 12 when members of the Klamath Settlement Group received a briefing from state and federal officials and PacifiCorp," said Steven Evans and Kelly Catlett of Friends of the River (FOR) in a statement Friday. "The agreement has not been approved by numerous other stakeholders, including Friends of the River, that have been involved in the federal relicensing of the Klamath River hydro dams for several years. It remains purely a product produced and endorsed by a sub-set of parties."

The organization is also wary of the many conditions that need to be met for dam removal to take place. These conditions include:

• Full protection for PacifiCorp from all liability.

• Placing a $200 million cap on dam removal costs to be recovered from Oregon and California ratepayers.

• A commitment from the State of California to provide $250 million in dam removal costs through a water bond to be approved by state voters.

• A commitment to attempt federal legislation to authorize and fund the controversial $1 billion Klamath Basin Settlement deal, which would provide water and power guarantees to Klamath Basin farmers.

• Agreement by the states to forego exercising their 401 permitting authority under the Clean Water Act to reduce polluted discharge from the dams.

• Putting the FERC relicensing process on hold until a federal study is completed by 2012 that will determine whether the benefits of dam removal justify the cost.

"Although Friends of the River believes that a concession in writing from PacifiCorp to remove the dams is a step in the right direction, we have significant concerns about the workability of the agreement in principle," Evans and Catlett said. "Foremost, the agreement has so many prerequisites that MUST occur before dam removal can happen that it would likely never result in the removal of any dams."

Echoing my concerns that Schwarzenegger is trying to link Klamath Dam removal to the building of new dams in the Central Valley, Evans and Catlett noted that California will likely rely on a proposed water bond to be approved by the voters in 2009 to provide the $250 million for river restoration outlined in the agreement.

"Conservationists will oppose this water bond if it also includes billions of dollars to build new or enlarge existing dams in California," they stated. "Coupled with the fact that voters may be leery of approving a multi-billion bond as the state economy continues to melt down, the prospect of the state to meet its obligation under the agreement seems dubious."

They also said the agreement in principle does not spell out who will be responsible for dam removal costs above and beyond the $450 million that would supposedly be covered by ratepayers and the State of California.

The federal and state agencies hope to come to a final agreement with PacifiCorp in June 2009. The process will include other stakeholders moving forward, but in what capacity is still undetermined at this time, according to Evans and Catlett.

They are also concerned that interim measures adopted until dam removal takes place will be not sufficient to protect salmon and steelhead populations hammered by low, warm water conditions nor protect people, fish, animals from the toxic algae blooms created by PacifiCorp's Iron Gate and Copco reservoirs on the Klamath. While recreational and commercial salmon fishing this year was closed in ocean waters off California and Oregon, due to the collapse of Central Valley fall run chinook salmon, in 2006 commercial salmon fishing was severely restricted because of the Klamath River salmon decline spurred by the Bush administration-engineered fish kills of 2002.

"It is unclear whether interim operations measures adopted after the final agreement is signed in June 2009 will be sufficient to reduce pollution in the Klamath River and adequately protect salmon and steelhead," they concluded. "But these are the measures that will be in place until the dams are actually removed."

I have worked closely on both the Klamath and California Delta restoration battles with recreational anglers, commercial fishermen, California Indian Tribes, farmers and environmentalists -and I greatly respect and support all of the stakeholders for the enormous time, money and effort that they have put into the battle to bring down Warren Buffett's Klamath River dams.

I agree with FOR that the unprecedented concession in writing from PacifiCorp to remove the dams on Thursday is a step in the right direction. I also agree with Evans and Catlett in their critical assessment of the Klamath agreement, particularly in regard to the apparent trade off between Klamath dam removal and the construction of new dams that Schwarzenegger and the Bush administration are pushing.

The final agreement is set to be signed by the states, federal government and PacifiCorp in June 2009. This gives us time to put intense and unrelenting political pressure on the incoming Obama administration to remove any connection to a canal/dam water bond in this agreement, as well strike out other troubling provisions of the tentative agreement.

This is a non binding agreement only and hopefully a more fish-friendly and environmentally-proactive administration in Washington willl craft an improved final agreement that doesn't trade dam removal for new dams and a peripheral canal - that doesn't restore the Klamath River at the expense of the Sacramento-San Joaquin River Delta, the largest and most significant estuary on the West Coast. We must restore both the Delta and Klamath River at the same time - and must emphasize to the incoming Obama administration the urgent need to restore the declining salmon and other fish populations in both watersheds!