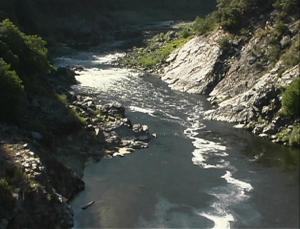 River of Renewal follows Jack Kohler, a self described ‘sidewalk Indian’ who grew up in San Francisco. The audience follows Jack on a journey of self discovery in the land of his Karuk and Yurok ancestors. Jack learns not only about the ancient cultural traditions of his people, but also their modern day struggles to defend tribal rights and the Klamath River.”

“The story moves from the fish wars of the 1970s to the current fight to remove Klamath River dams,” explains Kohler. “I hope audiences learn some of what I learned on my journey. Native People are still here performing their ceremonies, speaking their languages, fighting for their rights and making progress.”

Using interviews, archival sources, and contemporary cinematography, River of Renewal documents acts of protest and civil disobedience by Klamath Basin stakeholders whose ways of life are jeopardized by the decline of the region's wild salmon.

These dramatic scenes include "protest fishing" by gillnetters in response to a federal ban on Indian fishing in 1978, the Bucket Brigade by Klamath Project farmers to protest a water cut-off complying with the Endangered Species Act in 2001, a commercial fisherman's demonstration in San Francisco in response to the curtailment of the salmon fishing season in 2006, and guerrilla theater by tribal members who protested the refusal of a Warren Buffet-owned company to agree to the removal of Klamath River dams by crashing his shareholders' party in Omaha this year.

Representing the Klamath Basin crisis in the perspective of history, River of Renewal shows that the canning industry, the Upper Basin farm economy, and tribal, sports and commercial fisheries have all paid a heavy price for the collapse of the region's wild salmon species while the dams that cut salmon off from hundreds of miles of spawning habitat continue to function. If the current effort to remove the Klamath dams owned by Warren Buffett succeeds, it would bring about the largest river restoration effort ever attempted.

All programs are open to the general public and will require tickets for admission. Advance Tickets are available thru the American Indian Film Institute (AIFI) by calling 415-554-0525. Visa and Mastercard are accepted. Tickets will also be sold at the door. For more information, go to http://www.aifisf.com/home.php

November is National American Indian Heritage Month. "AIFI welcomes all audiences, all colors, to participate at festival screenings, seminars and awards show," according to AIFI.