Add an Event
Newswire
Calendar
Features
Home
Donate
From the Open-Publishing Calendar
From the Open-Publishing Newswire
Indybay Feature
Publish to Newswire
Add an Event
Related Categories: International | Global Justice & Anti-Capitalism
African Students Demand an End to Imperialist-driven War in the Congo
by UhuruRadio.com
Saturday Nov 1st, 2008 12:20 PM
The rise of mobile phones has caused a surge in deaths, because the coltan they contain is found primarily in Congo. The UN named the international corporations it believed were involved: Anglo-America, Standard Chartered Bank, De Beers and more than 100 others.

At 16:00 UTC (11am US EST), http://www.UhuruRadio.com will talk live with Kambale Musavuli, student at North Carolina A&T University, who recently organized an international week of campus action to raise awareness of the crisis in Congo.

Musavuli writes "The Congo is the greatest humanitarian crisis in the world today where nearly 6 million people have died since 1996, half of them children 5 yrs old or younger and hundreds of thousands of women have been raped all as a result of the scramble for Congo's wealth. The United Nations said it is the deadliest conflict in the world since World War Two. However, hardly anything is said about it in the media. Can you imagine 45,000 people dying each month and hardly a peep from anyone in the age of the Internet? This is literally what has happened and continue to happen in the Congo."

Musavuli and his family left the Democratic Republic of Congo in 1998 when he was 17. He charges "the war in the Congo is directly connected to the United States, as far as resource exploitation is concerned. The root cause of the conflict in the Congo is not more so of an ethnic strife, but more so of the scramble for Congo’s mineral resources.

This week, London's The Independent commentator Johan Hari wrote "The deadliest war since Adolf Hitler marched across Europe is starting again – and you are almost certainly carrying a blood-soaked chunk of the slaughter in your pocket. When we glance at the holocaust in Congo, with 5.4 million dead, the clichés of Africa reporting tumble out: this is a "tribal conflict" in "the Heart of Darkness". It isn't. The United Nations investigation found it was a war led by "armies of business" to seize the metals that make our 21st-century society zing and bling. The war in Congo is a war about you. Congo is the richest country in the world for gold, diamonds, coltan, cassiterite, and more. Everybody wanted a slice – so six other countries invaded.

"These resources were not being stolen to for use in Africa. They were seized so they could be sold on to us. The more we bought, the more the invaders stole – and slaughtered. The rise of mobile phones caused a surge in deaths, because the coltan they contain is found primarily in Congo. The UN named the international corporations it believed were involved: Anglo-America, Standard Chartered Bank, De Beers and more than 100 others.

Musavuli stated, "The rapes, the murders, they all are being done as a way of mass displacement. As one person is brutalized in a community, the people in the neighborhood will be afraid, and that will cause them to be displaced. We have about 1.5 million people internally displaced in the Congo. As this strategy has been used in the eastern part, we’re seeing masses of people being displaced from the villages, from the cities, simply because they live in a area rich of minerals."

Tune in to http://www.UhuruRadio.com this Sunday at 16:00 UTC, to hear a live interview with Kambale Musavuli.
http://www.uhururadio.com
§resistance in the Congo
by UhuruRadio.com Saturday Nov 1st, 2008 12:20 PM 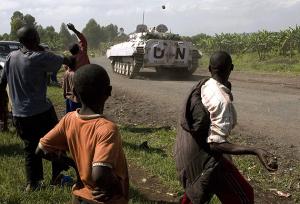 http://www.uhururadio.com
Add Your Comments
Support Independent Media
We are 100% volunteer and depend on your participation to sustain our efforts!