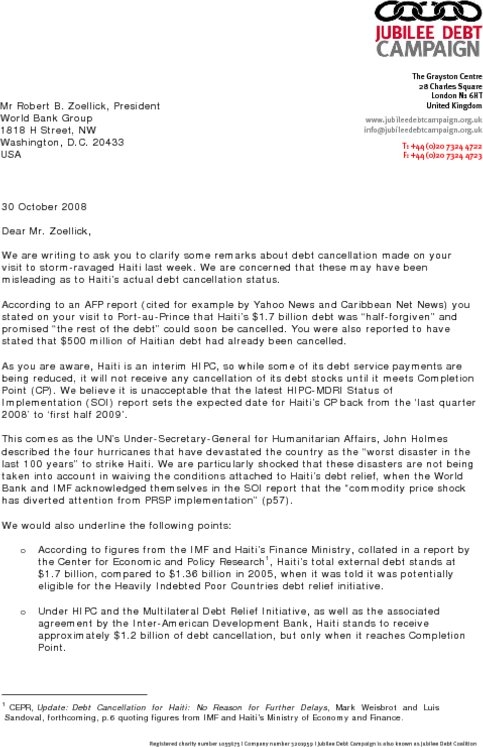 Haitian and international civil society groups have today written to World Bank President Robert Zoellick asking him to clarify ‘misleading’ remarks about debt cancellation made on a visit to storm-ravaged Haiti last week. [1]

Zoellick is reported to have told journalists in Port-au-Prince that Haiti’s $1.7 billion debt was “half-forgiven” and promised “the rest of the debt” could soon be cancelled. [2] He was also reported to have stated that $500 million of Haitian debt had already been cancelled. [3]

In fact, none of Haiti’s debt stock has yet been cancelled by the World Bank, and in recent weeks the World Bank has delayed debt cancellation for Haiti by six months. This comes as the UN’s Under-Secretary-General for Humanitarian Affairs John Holmes described the four hurricanes that have struck the country as the “worst disaster in the last 100 years” to strike Haiti. [4]

The campaigners point out that:

o Haiti’s total external debt stands at $1.7 billion, compared to $1.36 billion in 2005, when it was told it was eligible for the World Bank and IMF’s Heavily Indebted Poor Countries debt relief initiative (HIPC). [5]

o Under HIPC and the Multilateral Debt Relief Initiative that follows completion of HIPC, as well as an associated agreement by the Inter-American Development Bank, Haiti stands to receive approximately $1.2 billion of debt cancellation, but only when it reaches HIPC ‘Completion Point’.

o At the World Bank and IMF annual meetings in Washington earlier this month, Haiti’s expected Completion Point date was put back from ‘last quarter 2008’ to ‘first half 2009’ – a delay of six months. [6]

o The only debt relief Haiti has so far received under the HIPC scheme has been limited relief on its debt service payments since entering the scheme in 2006 – estimated by the IMF as $19.8 million. [7] However, no debt stock is actually forgiven under HIPC until a country reaches Completion Point. Haiti’s budgeted debt service payments in 2008 have continued to be more than $1 million every week.

Nick Dearden, Director of Jubilee Debt Campaign UK, said:
“It’s already a scandal that the World Bank has put back Haiti’s debt relief by six months when it’s facing its worst humanitarian disaster in a century. But for the Bank’s President to come to the country and apparently mislead the Haitian people that money has been made available to help them is unforgivable. Zoellick should be pressuring World Bank shareholders to cancel Haiti’s illegitimate debts immediately – instead he’s giving distressingly inaccurate reassurances that help is on its way.”

Charles Arthur, Co-ordinator of the Haiti Support Group, said:
“The fact that the President of the World Bank apparently doesn’t understand how his own debt relief scheme works speaks volumes about how well the World Bank is tackling the international debt crisis. What’s worse, even if it does finally complete the process, Haiti will still owe around US$500 million and will still face hundreds of thousands of dollars of debt service payments every week. As Zoellick says, the country is at a tipping point, and it urgently needs all the funds it can get.”

The call for a clarification from Zoellick comes as the United Nations reports that only 40% of the $107 million called for in its flash appeal for Haiti has been pledged – let alone delivered. [8]

[1] For the full letter, see http://www.jubileedebtcampaign.org.uk/media.

[2] Zoellick is reported to have said in Port-au-Prince on Monday that “We have forgiven half of Haiti's debt under programs that have been created with donors” and “If the process stays on track, there should be forgiveness of the rest of the debt by sometime, maybe, in the middle of next year." ‘Storm-hit Haiti could be debt-free by mid-2009: World Bank chief’, AFP, 23 October 2008, http://afp.google.com/article/ALeqM5jH_O3toCwduhmkgi3No8ZH_2qQiQ

[3] “Haiti's total debt stands at 1.69 billion dollars, of which more than 500 million dollars has been forgiven, Zoellick told reporters at Port-au-Prince airport before his departure. But he stressed that some conditions still have to be met -- including transparency, battling corruption and good economic governance.” (AFP)

http://www.jubileeusa.org
Add Your Comments
Support Independent Media
We are 100% volunteer and depend on your participation to sustain our efforts!