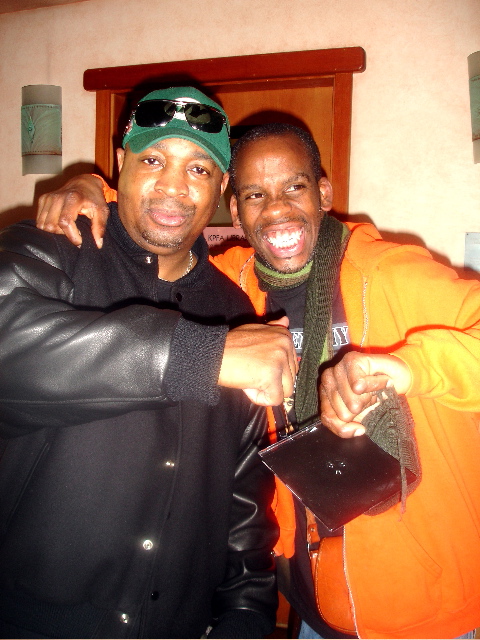 The Black Kripple & Krew will be back on Internet radio in November on All Talk Radio at http://www.alltalkradio.net 1st and 3rd Sunday mornings of the Month. 1st show is Nov. 16th.

Black Blind Blues Krip-Hip-Hop was the only radio show that played music of musicians with disabilities from Blues to Hip-Hop and everything in between on a pirate radio station but now they are going 100% internet with http://www.alltalkradio.net. They also will continue to play local and global artists with and without disabilities and news from PoorNewsNetwork.

The Black Kripple aka Leroy has over ten years experience in the media from public access television show, reporter for the only Black newspaper in San Francisco to three radio stations here in the San Francisco Bay Area. Although many radio stations told Leroy that his voice was not right for radio because of his disability and others didn't see a market for disabled musicians, finally Black Blind Blues Krip-Hip-Hop had found a home on pirate radio, BLR 104.1FM in Berkeley, CA that lasted four months until the station had to move making it hard to continue the show. Black Kripple & Krew realized that 90% of their listeners were listening through the Internet from all over Europe, Africa, Canada and the US so it didn't make sense to look for another traditional airwaves station. At the same time Leroy met Maxwell Silverhammer one of the hosts of, Shit That IrksMe, on All Talk Radio who is a blind DJ. He told Leroy about the Internet webcast and things have melted together since then. So The Black Kripple, Vivgurl and Mountainman will be back on the internet with their show, Krip-Hop.

Yes, their library has continue to blow up with music you can't find anywhere. They are still getting music from all over the country and world. From as far away as the Motherland to right here in the states, the Black Kripple & Krew will be playing the music by artists with and without disabilities, who are discriminated against by the music industry and mainstream radio stations. They still don't and won't play top ten hits. They play artists with disabilities that have been overlooked for years. They play more than artist people already know about, like Stevie Wonder and Ray Charles. The Black Kripple & Krew gets down n dirty in the streets with artists like H.U.S.H., Fezo, Cripple Crew, Rob DA Noize Temple, King Snyder, B-Sick, Dirty Wic, Miss Money, and MF GRIMM and others. We cover Metal, Hip-Hop, Blues, Jazz, Spoken Word, Country, Doo Whoop, Instrumental, R&B/Soul, World music and more, all by artists with disabilities. They also play the music of artists without disabilities, who have strong social justice themes like Immortal Technique, Paris and more.

The Black Kripple & Krew will continue to bring you the news and interviews of musicians with and without disabilities focusing on new CDs, books, movies, clothing lines and music videos. So we are looking at continuing our show on http://www.alltalkradio.net. Like we said, The Black Kripple & Krew, realized that our listeners came from all over the world most listened on the Internet so when the pirate station lost their Internet we knew that the writing was one the wall.

They don't want to tot their own horn but Black Blind Blues Krip-Hip-Hop radio show was and is the only proposal..radio show that plays music by musicians with disabilities from Blues to Hip-Hop from all over the world. The Black Kripple & Krew wants to apologize to their loyal listeners and musicians with disabilities who have mailed their Cds to them and looking for their show. They'll be back on the internet on Nov. 16th thanks to Maxwell Silverhammer of The Shit That Irks Me. and All Talk Radio.

Thelink, http://www.alltalkradio.net/kriphop is being worked on check back on Nov 16th.

Drop us an mp3 or news at kriphopproject [at] yahoo.com

The Black Kripple & Krew
http://www.kriphop.com
Add Your Comments
LATEST COMMENTS ABOUT THIS ARTICLE
Listed below are the latest comments about this post.
These comments are submitted anonymously by website visitors.