March in Fresno Supports the Homeless

by Mike Rhodes (mikerhodes [at] comcast.net)
A march in support of the homeless took place in downtown Fresno on Saturday, October 18. Organizers of the group asked why the City of Fresno has not done more to help the homeless. They cited $3 million designated for homeless housing in 2008 that was in the budget but never used. Why, they asked, is the city paying $13,000 a month for 3 portable toilets and a trash bin at the H street encampment and nothing to provide them with decent affordable housing? The photo below shows some of the marchers, the northern part of the H street encampment, and the Fresno skyline in the background. 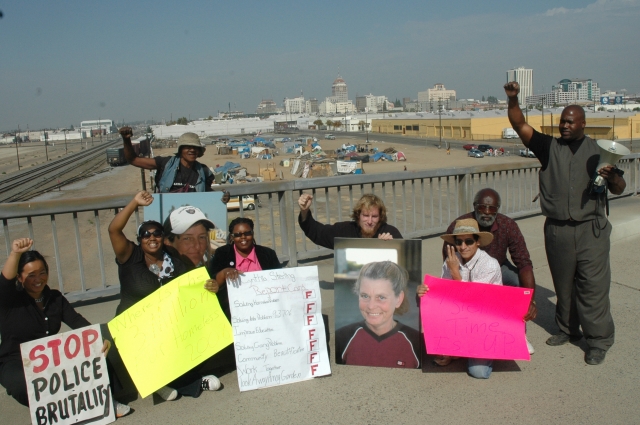 original image (2600x1729)
This is the Press Release that was sent out before the march:

Community Voices for Fair Representation will be holding a community awareness March and Rally to educate the community in the continued lack of efforts given to the Homeless from Social Services and elected Political Officials. It is time that someone takes accountability for their actions. District 3 has the greatest impact in the let down, our people in District 3 our suffering and dying! People in District 3 have spoken, however the Political leader(s) in District 3, have continued to ignore their voices, actions and efforts put forth to support the people, homeless and African American women who have continued to die in the 93706 zip code area, from the rapid spread of AIDS. If our leader in District 3 continues to sleep and ignore the people, who can we wake up, to take action? Retired educators, activists, community leaders will be present to speak before the community.

END_OF_DOCUMENT_TOKEN_TO_BE_REPLACED
§Summer Vue
by Mike Rhodes
Copy the code below to embed this movie into a web page:
Download Video (38.3MB) | Embed Video
Summer Vue, a participant at the march, explains why she was there. The video is 3:16 minutes.

END_OF_DOCUMENT_TOKEN_TO_BE_REPLACED
Add Your Comments
Support Independent Media
We are 100% volunteer and depend on your participation to sustain our efforts!