by Wendy Barranco
Ten Iraq veterans were arrested and one seriously injured during attempts to get the presidential candidates to hear them out. 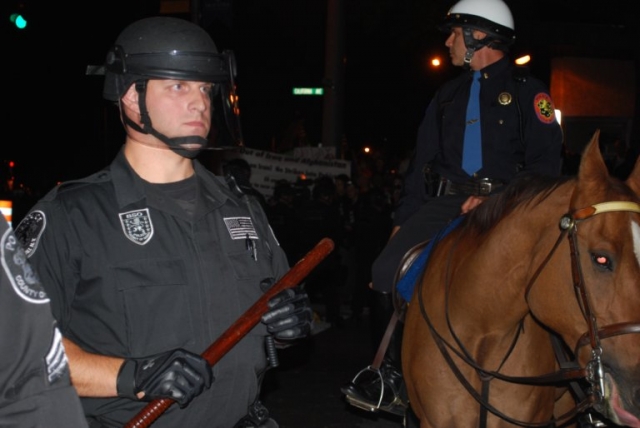 original image (768x514)
One hour before the final presidential debate of the 2008 campaign, fourteen members of IVAW marched in formation to Hofstra University to present questions for the candidates. IVAW had requested permission from debate moderator Bob Schieffer to ask their questions during the debate but got no response.

The contingent of veterans in dress uniforms and combat uniforms attempted to enter the building where the debate was to be held in order to ask their questions but were turned back by police. The IVAW members at the front of the formation were immediately arrested, and others were pushed back into the crowd by police on horseback. Several members were injured, including former Army Sergeant Nick Morgan who suffered a broken cheekbone when he was trampled by police horses before being arrested.

"Neither of the candidates have shown real support for soldiers and veterans. We came here to try and get serious questions answered, questions that we as veterans of the Iraq war, have a right to ask, but instead we were arrested. We will continue to ask these questions no matter who is elected. We believe that the time has come to end this war and bring our troops home, and we will be pushing for that no matter what happens in this election." said Jason Lemieux, a former Sergeant in the US Marine Corps and member of IVAW who served three tours in Iraq.


So what can YOU do about it? My fellow veteran brothers need you. We need to call the NY police department and ask them why they would trample IRAQ WAR VETERANS exercising their FREEDOM SPEECH in a peaceful manner. Is this the way members of the military who don the uniform and make an oath to defend the constitution, America, and it's people are treated? We MUST NOT ONLY hold the Police Department accountable but the Presidential Candidates as well for allowing this to happen. THIS IS NOT DEMOCRACY, THIS IS A POLICE STATE.

Below are the numbers. Call now and anytime until November 10th when the court date is set for the detained veterans. Stay posted for a possible action then.


And the complaint line

Call 516-573-7000 and ask to be connected to the Desk Officer
where the incident occurred (Hofstra University). 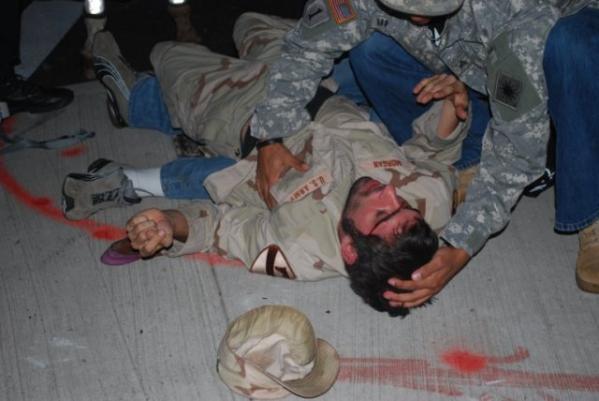 At least five members of the Iraq Veterans Against the War (IVAW), a group of military veterans who are calling for immediate withdrawal from Iraq, were arrested along with at least four civilians outside the final presidential debate at Hofstra University on Wednesday, October 15. The group had been trying to get answers for their questions from the candidates. "Neither of the candidates has shown real support for service members and veterans," said Jason Lemieux, a former Sergeant in the US Marine Corps who served three tours in Iraq, and member of IVAW. The veterans and their supporters were met by riot police as well as police on horseback. After a tense standoff for five minutes, police used their horses to attack the crowd, knocking over and trampling several — including Army Sergeant Nick Morgan (pictured), who suffered a broken cheekbone. Read Reports by Ben Dean-Kawamura | by Alex Kane | Photo by Bill Perry

The questions IVAW wanted to ask were:
* (To Obama): "As President of the United States of America, are you prepared to back up your own words [about the illegality of the Iraq War] and the U.S. Constitution by supporting service members refusing to participate in what you describe as an illegal occupation?"
* (To McCain): "What promises are you willing to make, as a veteran, as a senator, as a presidential candidate, to the veterans of the United States, to prove that you will ensure the V.A. is fully funded, staffed and capable of preventing troops from suffering as they are now?" Demands in full: IVAW Send Letter to Schieffer, Plan Protest at Hofstra Univ. Debate

RELATED: Will YOUR vote count? State's polls lack uniform standards
END_OF_DOCUMENT_TOKEN_TO_BE_REPLACED
Add Your Comments
Latest Comments
Listed below are the latest comments about this post.
These comments are submitted anonymously by website visitors.
TITLE
AUTHOR
DATE
Mr Thomas unable to read
ArmyVet
Iraq Veterans Arrested
Nessa
Be The Media
David
Mr. Thomas
Thomas
Support Independent Media
We are 100% volunteer and depend on your participation to sustain our efforts!