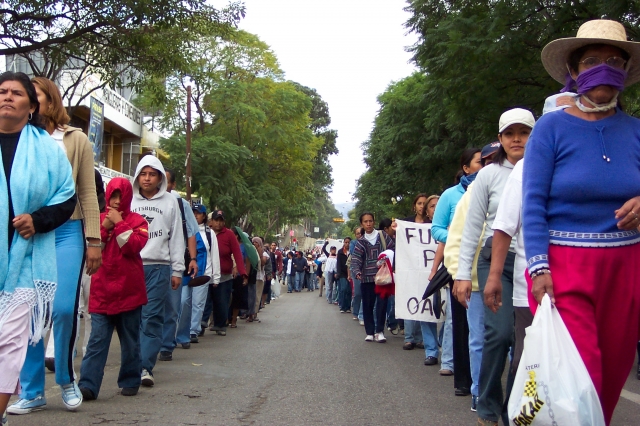 This show is dedicated to Sali (Marcella Grace Eiler), found dead september 24th in san jose del pacifico, oaxaca mex. I do not want to contribute to any misinformation about her life or her death. It is difficult to know exactly what happened to her; I found it impossible to even speak about it on the air.

But this show was produced to provide context for the violence that took her life.

News from Mexico. We'll discuss sexual violence patriarchy, and militarism across Mexico. Background and updates on the femicide in Juarez, trafficing and sexual slavery, the Zapatista women's encuentro, the struggle for safe and legal abortion in Mexico, the murder of two indigenous female radio producers in Oaxaca, and the recent rape and murder of Sali Grace in Oaxaca.

It's Domestic Violence Awareness month here in Santa Cruz. We'll make connections between militarism and gender violence, and between immigration and sexual freedom with Simón Sedillo of elenemigocomun.net.

Stay tuned to free radio santa cruz, this is the indynewswire.

2008 began with an Encuentro in Chiapas Mexico, the Encuentro of Zapatista women and the women of the world. We'll review the Womens Revolutionary Law that guides the Zapatista uprising and hear a PSA played on Radio Insurgente, a message to husbands and fathers who haven't yet learned that a woman is free to make her own choices.

We'll hear the trailer for a film, On The Edge, about the femicide in Ciudad Juarez. On The Edge is a documentary covering the brutal murders of hundreds of poor young women in the border town of Ciudad Juárez, Mexico, murders that have been repeatedly ignored and unresolved by police and governments since 1993, despite the continued and persistent efforts of family members and activists to obtain justice for the victims. Rather than provide an easy, murder-mystery style solution to the crimes, the film sets out to explain the social, cultural, and economic factors that have created this situation where the killings can continue, and continue to go unpunished. In addition to explaining the circumstances, On The Edge situates the Juarez killings in the context of wider political and economic trends, showing the audience that this is not just an isolated phenomenon in one far-off city, but a glimpse at a nightmarish future for much of the world, unless something is done to prevent it.

The trailer mentions the cultural and economic factors that contribute to this violence: The two examples I've started with are both border states, and when we talk about the economic and cultural factors that make borders so violent, we talk about immigration and militarized borders. But in Mexico the realities of law-enforcment are interesting. I thought I'd read this post from from Mexico Solidarity Network http://www.mexicosolidarity.org/node/195 regarding one federal police agency protesting, and another federal police agency raiding the offices of another. The government is trying to consolidate the two agencies into one.

We'll hear from Lydia Cacho, a Mexican writer journalist and activist who founded and runs the Centro Integral de Atencion a la Mujer in Cancun and get an update on her extraordinary case.
She gave a speech in Mozambique on world press freedom day which I'll read, and a talk in Canada which was recorded and uploaded to radio4all. We'll hear it.

Making connections between militarism and political economy. Updates on Plan Mexico's influx of military aid, media making in Mexico, which reportersw/oborders calls the most dangerous place to be a reporter second only to IRAQ http://www.rsf.org/article.php3?id_article=28797;

Context for those unaware of the 'gangster move' called the Monroe Doctrine or Fort Leavenworth's role in land theft and genocide: Simon lays it down. He's got his finger on the pulse at http://www.elenemigocomun.net


DF Law legalizing Abortion:
http://www.thefword.org.uk/blog/2008/08/the_right_to_ch_1
The F-Word Blog: The right to choose is not enough

Abortion is now legal in Mexico City, but efforts to make sure all women are able to access their right to choose have run into problems.It’s really interesting (and fantastic) that right from the offset, Mexico DF placed an emphasis on legal abortions for all, not just wealthy citizens who probably already had ways and means to access abortion in relative safety. Access, not just a theoretical choice. However, it’s not been a smooth ride...

Outro Commentary:
How does all of this relate? There's obviously a pattern, an ideology, and it's called Patriarchy.

Men in control, men acting with impunity, men making decisions for women, men speaking for women. [Hi, I'm a man trying not to speak for women, here in the studios of FRSC.] There's this ad that has appeared in 'the nation' and other liberalish mags recently, paid for by several immigration control orgs: 'population, immigration, and the foreseeable limits of america's capacity: a conundrum of epic proportions for the progressive thinker... the reality is that
americans are having fewer children. the other reality is that 82% of america's future population growth will be driven by immigration and births to immigrants... we want it all we want a clean environment, adequate natural resources, good housing, plenty of food, first rate healthcare, and so on. we also feel a need to welcome the world to our front door, or in millions of cases, our back door. But america is rapidly approaching the point of no return..."

If people are truly interested in solving problems of unsustainable population growth, the solution i propose is not to close the borders or limit immigration by force and violence. i propose that the same people who control and distribute wealth on both sides of the border be removed from the controls, that their hands be taken out of the proverbial cookie jar. the limited and increasingly scarse resources listed in the ad, water, energy, clean air, quality
infrasx,... resource distribution in this nation is based on wealth and therefore in many ways STILL, race. and in the nation with which this house of cards economy is inextricably linked, mexico, resource distribution is even more disturbing.

The scapegoating of immigrants is an age old tradition in times of crisis, especially in times of war and economic instability. but if we are truly interested in lowering birth rates to sustainable levels on a scale that will have a global impact, the global emancipation of women will have an effect infinitely larger than that of any border fence, military aid package, or piece of bullshit legislation. Support women in having control over their own bodies, their own sexuality, their own reproductive abilities... and we'll see a change in birth rates. the institutions that stand in the way are the very same ones that propose guns and walls as solutions to the problems of 'unsustainable growth."

You want to 'solve' the immigration 'problem'? Then we need a counterweight for state power and church power, both patriarchal institutions that seek to limit the voices of women, place control over their bodies in male bodied hands, and continue the domination and exploitation of women with sexual violence.
http://www.freakradio.org
§mp3 mono INW 10.3.08
by danielsan Friday Oct 3rd, 2008 12:11 PM
Listen now:
Copy the code below to embed this audio into a web page:
Download Audio (39.7MB) | Embed Audio
http://www.freakradio.org
Add Your Comments
LATEST COMMENTS ABOUT THIS ARTICLE
Listed below are the latest comments about this post.
These comments are submitted anonymously by website visitors.