by The Chickens
Ed Boks of Los Angeles Animal Services says Jewish Kapparot ritual is just a "pagan tradition" that is "illegal and inhumane." 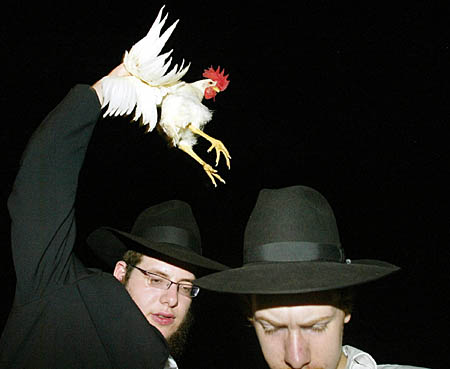 Los Angeles, CA October 2, 2008 -- Every year for six days before Yom Kippur (the Jewish Day of Atonement on October 2) some Jews perform the ritual "Kapparot." Kapparot is a custom in which the sins of a person are symbolically transferred to a fowl. The fowl is held above the person's head and swung in a circle three times while certain words are spoken. The fowl is then slaughtered so that the person may have a good, peaceful life. Sometimes the chickens are given to the poor as food but unfortunately the chickens are not always cared for or killed humanely.

The First Amendment "Freedom of Religion" does protect animal sacrifices except when a municipality or state has an existing animal cruelty statute that forbids it. If the religious sacrifice of an animal violates that statute, then the city or state can prosecute that act. If the animals as in this case were cared for, used or killed in a way that violates California's existing anti-cruelty statutes, then the defendants will not be able to fall back on the First Amendment as a defense. They would be guilty of animal cruelty which is punishable by a fine and/or jail time.

Kapparot is not mentioned in the Torah or in the Talmud. Several Jewish sages opposed the ritual, with some considering it a senseless heathen superstition. The Ramban (Nachmanides) and Rabbi Joseph Caro the compiler of the "Shulchan Aruch," the most authoritative code of Jewish laws called Kapparot "a foolish custom that Jews should avoid."

General Manager of LA Animal Services and ex-pastor Ed Boks stated, "Some of our nation's healthiest animal husbandry practices and laws originated in the ancient traditions of the Torah. Nowhere is the practice of Kapparot even mentioned in the Torah. It is a pagan tradition that has been muddled into the religious practices of a small Jewish sect. Kapparot should have no place in the 21st Century Los Angeles community."

Andrew Smith of Chicken Rescue asks people who customarily partake in this ritual to instead consider the humane and legal alternative. One may place money in a handkerchief and use this instead of a chicken. The money is then given to the poor. Former Chief Rabbi Israel Shlomo Goren stated, "Kapparot is not consistent with Jewish teachings and law. Repentance and charity can be better accomplished by using money instead of a slaughtered chicken."

Dr. Karen Davis President of United Poultry Concerns said, "Kapparot includes the pre-ritual cruelty to the chickens, who are forced to sit crammed together in their own excrement for days without food, water or shelter awaiting their terrible death. The mercy ascribed to God by those who seek God’s mercy for themselves is thus withheld from the chickens who have the same capacity for pain, fear and distress as human beings. That Kapparot is a medieval custom, and not a Jewish law, makes it even more reprehensible."

Dr. Richard Schwartz, a respected Jewish author & educator, stated: "The use of money rather than chickens is consistent with Judaism's powerful teachings on compassion to animals. At a season when we ask for God's compassion, we should have compassion on God's defenseless creatures."