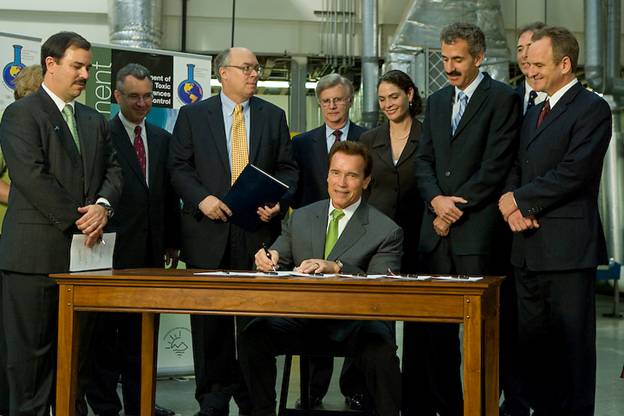 Governor Arnold Schwarzenegger vetoed many of the top environmental bills on his desk this week, including the most important air quality bill, SB 974, demonstrating that there is very little actually "green" about the "Green Governor."

On the last day before the deadline to act on bills before him, the Governor vetoed the Clean Ports Investment Act, "the most significant air quality measure for this legislative session," according to Tina Adolina, Legislative Director for the Planning and Conservation League (PCL). SB 974 (Lowenthal) would have raised $300 million a year to fund critical air pollution mitigation efforts and improve freight transportation throughout California.

Schwarzenegger vetoed the bill under pressure from Alaskan Governor Governor Sarah Palin, the Republican vice presidential nominee. On the day before Senator John McCain named her as his running mate, Palin wrote a letter to Schwarzenegger urging him to veto the bill, claiming that SB 974 would lead to higher costs on goods shipped to Alaska. Schwarzenegger recently endorsed McCain for president.

“We are extremely disappointed that the Governor went back on his word and vetoed the best solution we have to the devastating pollution plaguing communities near the ports and other goods movement corridors,” stated Andolina. “The state clearly lacks the funding needed to tackle this air pollution and SB 974 represented our best opportunity to finally address this epidemic.”

SB 974 would have collected up to $30 per shipping container processed at California’s three large ports - Oakland, Long Beach, and Los Angeles, and reinvests that money into infrastructure improvement projects and air quality mitigation measures. Nearly half of the goods entering the United States come in through these ports. However, the ships, trucks, trains and the cargo equipment needed to get the goods to store shelves are responsible for toxic air pollution.

Operations at the ports of Long Beach, Los Angeles and Oakland along with related freight transport generate 30% of the statewide emissions of nitrogen oxide (a smog-forming pollutant) and 75% of all diesel particulate matter pollution.

"These pollutants contribute to increased rates of asthma, respiratory disease, and premature death," said Adolina. "In fact, diesel pollution is the worst toxic air contaminant in California, responsible for 70% of the state’s air pollution-related cancer risk."

Approximately 3,700 deaths and 360,000 sick days in California each year are directly linked to toxic emissions from goods movement. The California Air Resources Board estimates that over the next 14 years, the state will spend an additional $200 billion in health care costs directly related to goods movement pollution. SB 974 would have provided a steady funding stream that could have generated nearly $300 million dollars annually to fund air quality projects and infrastructure improvements.

“The Governor likes to tout his environmental resume. However, when it came time for him to stand with all Californians and stand up to the big corporations polluting our air, he chose not to,” said Andolina.

The Governor also angered members of a broad coalition of fishing and environmental groups, led by the California Sportfishing Protection Alliance, when he vetoed AB 1806, the Fish Rescue Plans Bill, this week. Assemblywoman Lois Wolk's badly-needed legislation would require the Department of Fish and Game to develop a set of protocols to evaluate the need for fish rescue and relocation plans within the Sacramento-San Joaquin River Delta.

Schwarzenegger claimed, with no evidence whatsoever, that the bill “is unnecessary and duplicates authority already conferred to the Department by existing laws and regulations for mitigation for fish and wildlife impacts and coordination between federal, state and local agencies."

“While I am disappointed that AB 1806 was not signed, I want to express my thanks to the fishing community for their strong support in this effort,” said Wolk, Chair of the Assembly Water, Parks, and Wildlife Committee. “The fishing community took up the challenge to help restore the state’s fisheries and the Sacramento-San Joaquin Delta, and has proven a force to be reckoned with. When thousands of striped bass and other sport fish started dying on Prospect Island last year, it was fishermen who mounted the rescue operation that saved thousands of fish--and their advocacy helped send AB 1806 to the Governor’s desk."

"The bill, the most meaningful measure on the Governor’s desk related to wildfire danger, simply asked that all new developments have fire protection and that new communities are designed to ensure the lives of residents and firefighters are not put at risk unnecessarily," according to Traci Sheehan, PCL executive director, in the California Progress Report (http://www.californiaprogressreport.com/2008/10/top_environment.html). "Given the unprecedented wild fires we have seen this year and knowing that catastrophic wildfires will be more frequent, Governor Schwarzenegger’s veto of AB 2447 is both irresponsible and unconscionable."

The Governor also rejected SB 68 (Kuehl), a PCL sponsored measure "to help bring a bit of clarity," to counties, cities and the public bringing lawsuits under the California Environmental Quality Act.

"Currently, those filing lawsuits have no way of knowing for certain whom exactly they must include in a lawsuit. So, to be sure they include everyone to prevent their case from simply being thrown out, filers cast a wide net and include people they later learn are not involved," explained Sheehan.

"This practice, while necessary, serves no one. PCL worked with the California Building Industry Association and the California League of Cities to ensure SB 68 was a practical solution to problem. Despite the lack of any opposition to the measure, the Governor vetoed it," she added.

The Governor signed 772 bills and vetoed 415 after signing the budget on September 22. This veto rate of 35 percent is the highest percentage of vetoes in "at least 40 years," according to the Sacramento Bee's Capitol Bureau.

While Schwarzenegger spouts off about "green jobs" and "stopping global warming" at carefully choreographed press conferences and events throughout California and the nation portraying him as the "Green Governor," his administration has pursued water and fishery management policies that have resulted in the collapse of salmon and Delta pelagic species. Record water exports from the California Delta to subsidized agribusiness under his administration have devastated the estuary's food chain and resulted in the dramatic decline of salmon, delta smelt, longfin smelt, striped bass and other species.

However, rather than working with fishing groups, environmental organizations, Indian tribes and Delta farmers to restore the Delta, Schwarzenegger is actively campaigning for a water bond that will result in the destruction of the largest and most significant estuary on the Pacific Coast.

The $9.3 billion water bond that Schwarzenegger and Senator Diane Feinstein are working to put on the ballot, probably in June, would bail out corporate water contractors while soaking the taxpayers for decades to come. It would result in the building of two new reservoirs, Sites and Temperance Flat, and the construction of "improved conveyance" - Schwarzenegger's code language for a peripheral canal, in order to export even more water from an already over-appropriated estuary.

Schwarzenegger's "Green Governor" image is nothing but a dark, cynical fantasy, based on the Governor's actions this week.

Here is the Planning and Conservation League's breakdown of the top environmental bills signed and vetoed by Schwarzenegger over the past week.

AB 31 (de Leon) – A comprehensive measure that allocates $400 million from Proposition 84 to address the need for neighborhood parks in the most park-poor communities throughout California, consistent with Proposition 84 criteria. Creates a competitive grant program for distributing funds through eligible public agencies and non-profit organizations to ensure California's park-starved communities receive the health, economic and environmental benefits that local parks provide.

AB 1879 (Feuer) – Enacts chemical policy reform by requiring the Department of Toxic Substances Control to adopt regulations to identify and prioritize chemicals of concern in consumer products, evaluate the hazard traits of chemicals and their alternatives, and establish a range of regulatory actions to protect public health and the environment.

AB 2222 (Caballero) – Directs the State Water Resources Control Board to recommend investments and policies necessary to assist regions throughout California in protecting and cleaning up vital groundwater resources.

AB 2522 (Arambula) – Authorizes the San Joaquin Valley Unified Air Pollution Control District to increase the existing vehicle registration fee from $6 to up to $30 for incentive-based programs to achieve state and federal air quality standards and requires at least $10 million of the revenues to be used to mitigate air pollution in disproportionately impacted communities in the San Joaquin Valley.

SB 375 (Steinberg) – Requires regional transportation agencies to adopt a sustainable communities strategy within its existing regional transportation plan that will provide adequate housing for all economic segments of a region and meet regional greenhouse gas emission reduction targets set by the California Air Resources Board, taking into consideration the impacts of development of important resources lands and farmland. Provides CEQA incentives for development projects within a local jurisdiction whose general plan is consistent with the sustainable communities strategy.

SB 509 (Simitian) – Requires the Department of Toxic Substances Control to establish a web-based Toxics Information Clearinghouse containing data on the hazard traits of chemicals and, with the Office of Environmental Health Hazard Assessment, to identify human health and environmental hazards posed by chemicals used in consumer products, based on available data.

SBX2 1 (Perata) – Directs existing bond funds to programs and projects that will help stabilize the Bay Delta Estuary and increase water supply reliability throughout the state.

AB 2447 (Jones) – Requires a city or county to make a finding that a new subdivision has adequate fire protection prior to approving the project. Also requires that the project have at least two escape routes and that the design allows all necessary safety improvements, such as turnarounds, defensible space, and emergency water systems.

AB 2970 (Eng) – Requires the Department of Water Resources to develop a Delivery Reliability Report for the State Water Project. This legislation advances accurate water planning by ensuring that water agencies base forecasts of water supply on reliable and scientifically valid information.

SB 68 (Kuehl) – Provides increased clarity during CEQA litigation by specifying that the parties that must be named in a lawsuit are limited to those who received an approval for the project and are listed by the public agency in its notice of determination or notice of exemption. The current uncertainty as to who must be named forces petitioners to cast a wide net and name all the parties they believe might have received an approval, resulting in unnecessary parties being included in a lawsuit.

SB 775 (Ridley-Thomas) – Establishes a program that will increase screenings of California children for risk of lead poisoning through the use of the immunization program, improve reporting of information by laboratories to better track cases of lead poisoning, require the Department of Public Health to provide annual reports regarding screening and lead poisoning rates in California, and make information about lead available to pregnant women.

SB 974 (Lowenthal) – Establishes a fee of $30 per shipping container (20-foot equivalent) that passes through the ports of Los Angeles, Long Beach and Oakland, with fee revenues used equally to improve infrastructure and reduce traffic congestion in port corridors and to reduce air pollution from the ports.

SB 1113 (Migden) – Allows a court, upon motion, to award attorney's fees and other costs, including expert witness fees, to a successful party in any action that has resulted in the enforcement of an important right affecting the public interest.

SB 1313 (Corbett) – Prohibits the manufacture, sale, or distribution of any food contact substance that contains perfluorinated compounds in any concentration exceeding ten parts per billion. Requires manufacturers to use the least toxic alternatives when replacing perfluorochemicals or their precursors. Prohibits manufacturers from replacing perfluorinated compounds with certain carcinogens and reproductive toxins.
Add Your Comments
Support Independent Media
We are 100% volunteer and depend on your participation to sustain our efforts!