Add an Event
Newswire
Calendar
Features
Home
Donate
From the Open-Publishing Calendar
From the Open-Publishing Newswire
Indybay Feature
Publish to Newswire
Add an Event
Related Categories: Santa Cruz Indymedia | Arts + Action | Health, Housing & Public Services | Police State & Prisons
Drum Circle Continues at Santa Cruz Farmer's Market; Police Told to Back Off
by ~Bradley (bradley [at] riseup.net)
Wednesday Oct 1st, 2008 10:51 PM
On October 1st, green mesh fencing was put up again in Santa Cruz's Parking Lot #4 next to the downtown Farmer's Market. The market began at 2:30pm and by 3:00pm, many people were disappointed by the fencing around the trees and the absence of the sounds of drumming in the air. But the drumming got started when a little kid, a regular at the drum circle, began playing his drum in the dirt near the sidewalk on Cedar Street. 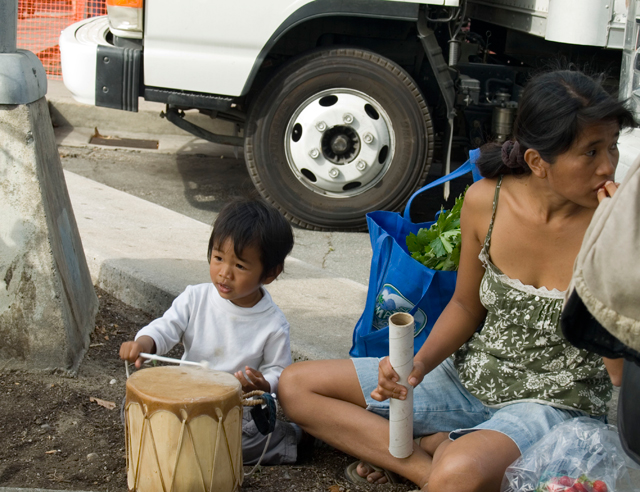 A man was soon screaming after he tripped, landed on the mesh fencing, and then rolled his way out. Meanwhile, other people pulled up stakes, and the man escaped the green mesh fencing with a minor injury to his leg. The Santa Cruz Police Department arrived at Parking Lot #4, followed by the Fire Department, to assist the man with his injury. The (uniformed) police did not approach the drum circle or harass people in the parking lot.

While the man was being treated, another individual got the attention of Santa Cruz Police Department Officer Martin Brandt, pointed at somebody, and then told Brandt that the person he pointed at was involved in pulling up fencing stakes around the magnolia trees. Brandt quickly and openly responded, "We have been told to pretty much leave this place alone."

A few minutes later, I walked up to Officer Brandt and said to him, "I understand that the police have been told to stay away from the drum circle."

Officer Brandt then asked me, "Where did you hear that?"

I replied, "I heard you say that to the man in the blue hat after he told you about someone pulling up stakes."

With anger, Officer Brandt said, "Then you are reporting gossip."

I said, "Well fine, then I am reporting gossip. Do you want to comment?"

Officer Brandt replied, "I will deny it."

I told him he was a liar and he told me to back up.

There you have it. Santa Cruz Police officers were told to back off and pretty much leave the drum circle and Parking Lot #4 alone during Farmer's Market.

The drum circle continued into the dark after the market ended.

Only time will tell what will happen in Parking Lot #4 on Wednesday, October 8th and beyond. Will the green mesh fencing return? If so, will it come down again, one way or another? Will people be able to freely congregate, make music, and share food without surveillance and harassment by the police?

For background information and coverage from previous weeks, please check out: 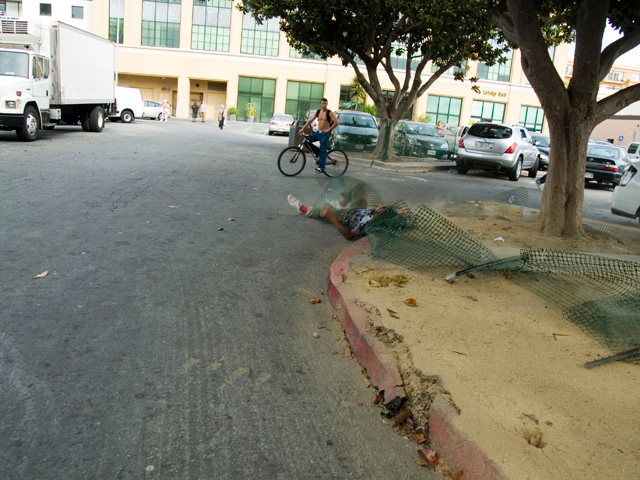 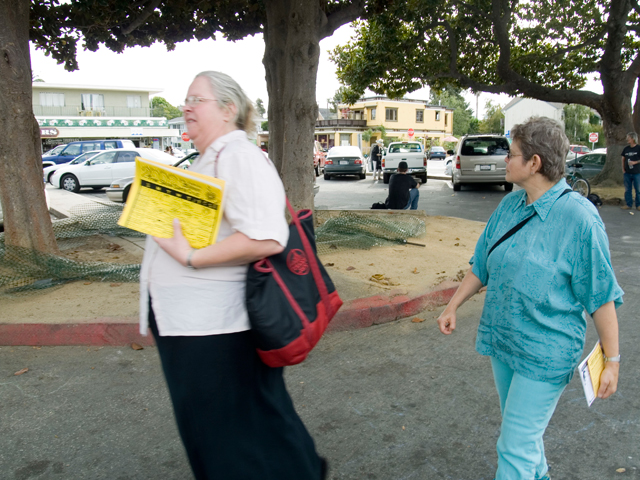 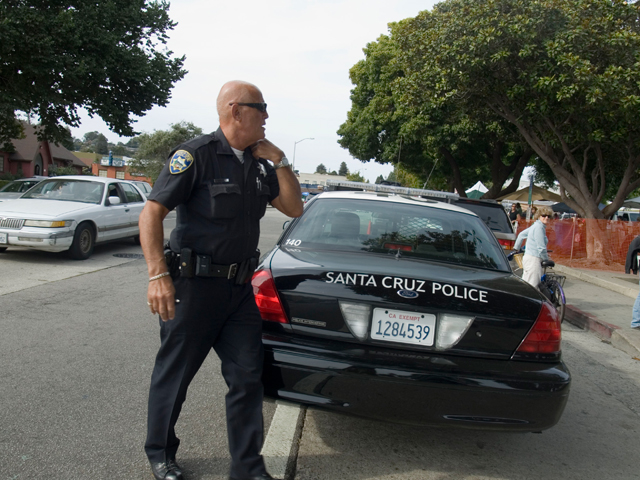 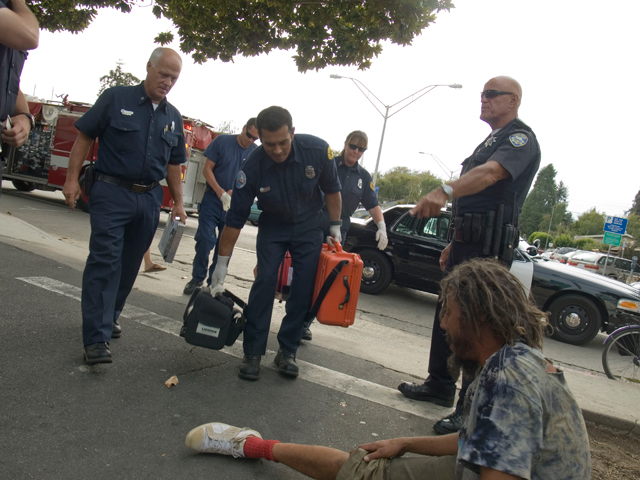 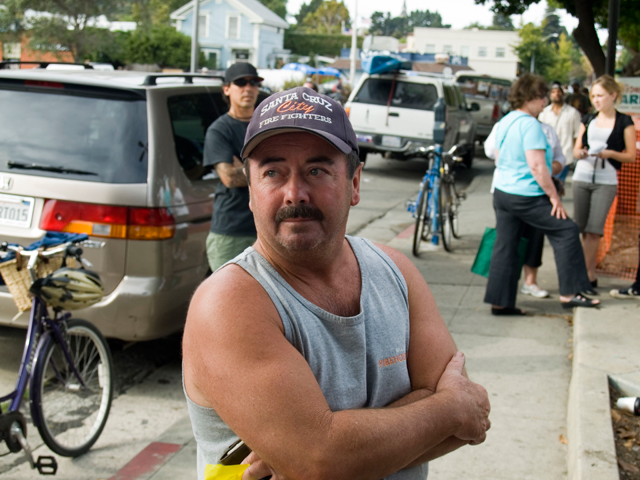 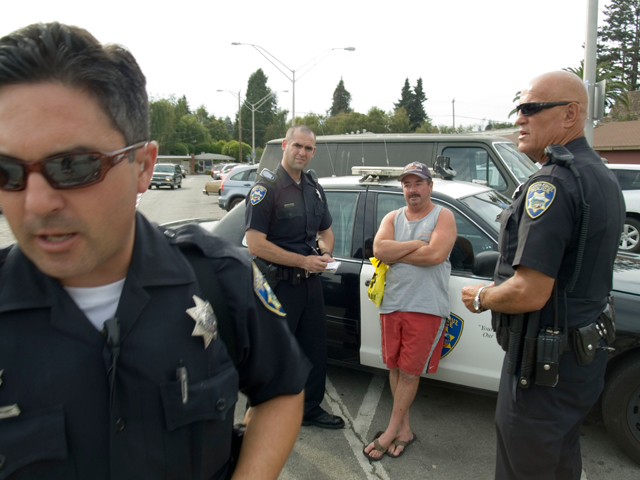 The guy with the blue Santa Cruz City Fire Fighters hat gave the police a report about people who he said pulled up fence stakes, even though Officer Brandt had told him that the police, "have been told to pretty much leave this place [Parking Lot #4] alone."

After the man walked away from the police, I asked him if I could ask him a few questions.

He said to me, "Sure you can, and I can kick your ass because I do not have to be restrained like these guys do," and pointed towards the police. 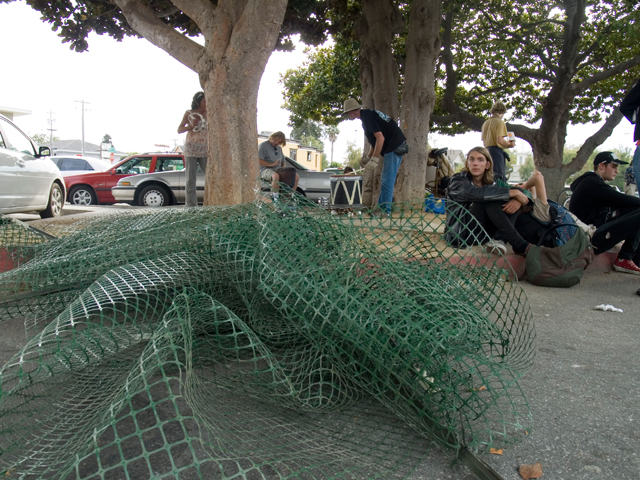 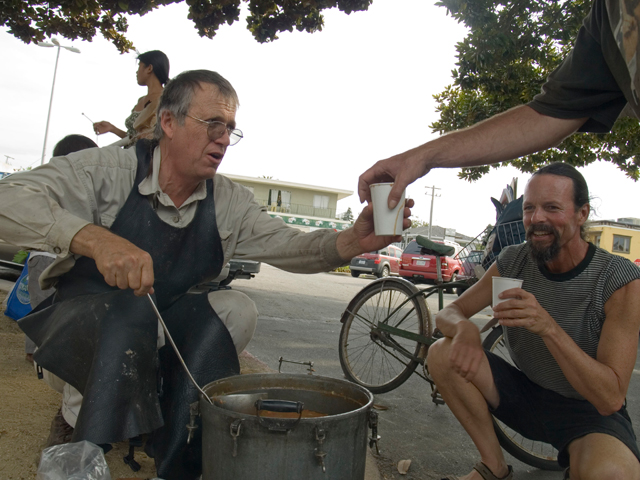 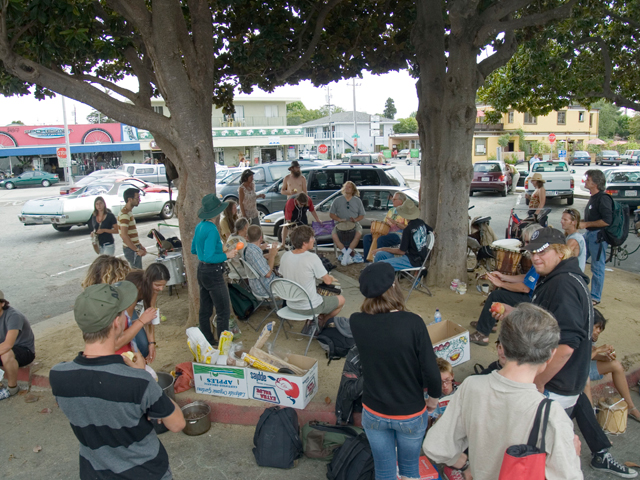 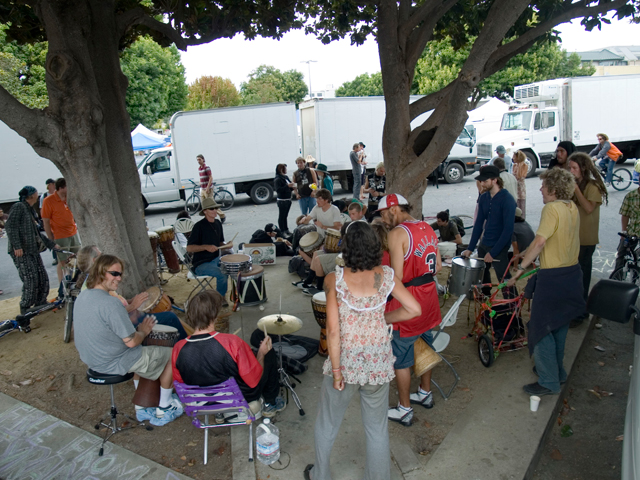 While I sat down to enjoy a free cup of Joe's soup, I spoke (in Spanish) with two people (not pictured) that work (doing some kind of construction or painting) a couple blocks from Parking Lot #4. While spending their break in the parking lot, they ate food from the farmer's market and told me that they enjoy the sound of the drumming while they are working.
§Sergeant Mike Harms and Sergeant Loran Baker
by ~Bradley Wednesday Oct 1st, 2008 10:51 PM 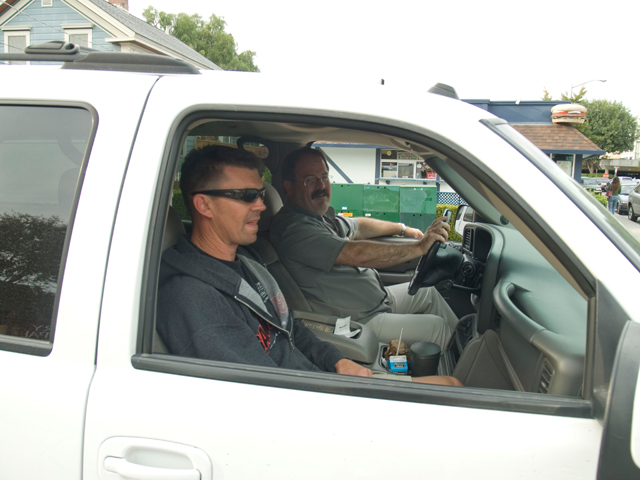 As Santa Cruz Police Department Sergeant Loran Baker and Sergeant Mike Harms came to a stop at the corner of Lincoln and Cedar in their unmarked police SUV, I asked them about the police being told to back off from Parking Lot #4. They refused to comment and Sergeant Baker drove the SUV away. 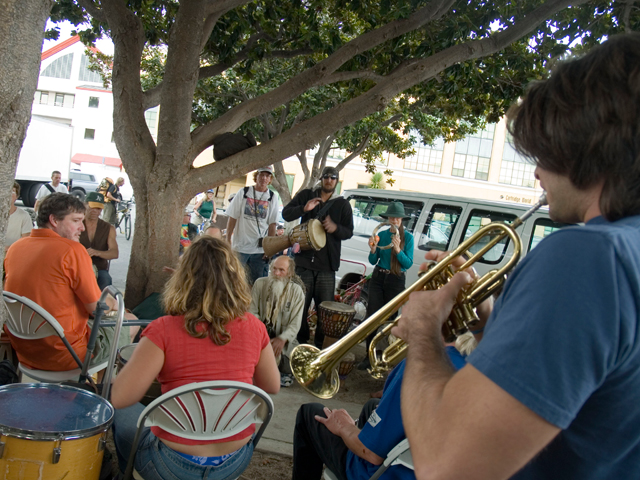 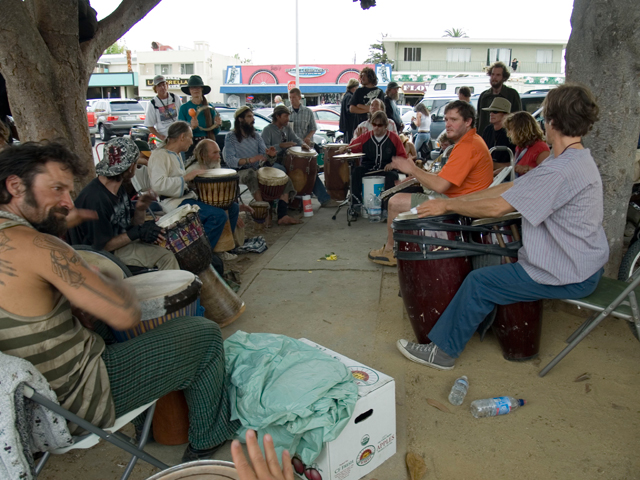