by New Court Order for Page Mill
An East Palo Alto tenant describes safety issues resulting from landlord David Taran's negligence at apartments owned by his company, Page Mill Properties. While tenants suffer, the exchange of legal challenges continues between the City of East Palo Alto and the landlord. Recently the city obtained a court order to compel Page Mill to produce documents it has denied city attorneys in a case that has tenants and displacement watch observers eagerly awaiting an outcome.
Report by R. Robertson
Photo: Tenants gather in front of apartments to march to Page Mill Properties for a demonstration, August 2008. 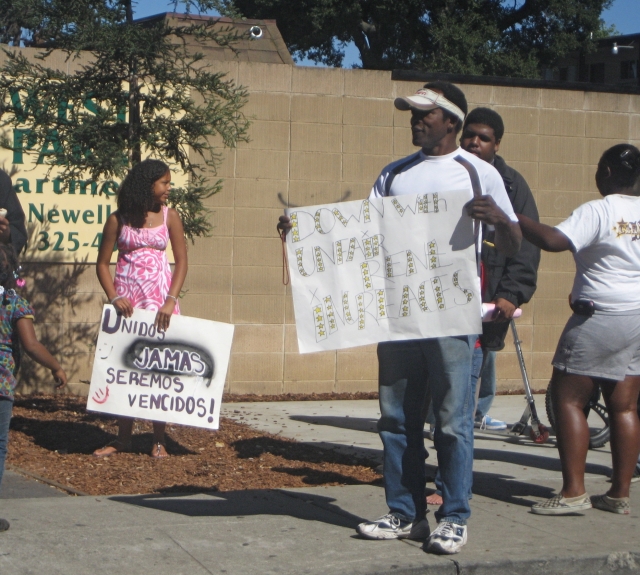 original image (1867x1680)
In the high priced Bay Area, East Palo Alto is one of the last low cost places to live. In this city in the center of Silicon Valley, approximately 4500 people have been adversely affected by illegal rent increases and the negligence of owner/managerment/investment firm Page Mill Properties.

Many of the residents in these apartment buildings live 3-6 people to a one bedroom apartment. Some are single parents; a good number have more than one job just to get by. They are struggling to understand how this could happen.

The city's Rent Stabilization Ordinance states that rent may only be raised 3.2% per year, yet some tenants have had their rents raised in excess of ten times that amount. Page Mill Properties, headed by CEO/Investor David Taran, has sued the city of East Palo Alto and is challenging the ordinance.

The landlord's team of lawyers has made futile attempts at justifying the rent increases. They started by greenwashing, saying they installed energy saving appliances. Tenants counter that washing machines and other appliances are frequently not functioning properly and complaints go unheeded. The landlord has improved aesthetics to increase investor confidence, but while the exterior appearance of the properties may appear "fixed up" tenants find that requests for repair of extremely worn carpeting and the like are routinely turned down.

The landlord says that costs were incurred when they installed security gates at some of the properties. While doing so protects their investments, it has caused problems for ambulance, fire and police access.

One tenant, Janet Boggs, saw her rent go up 25% this year. But what Janet, who is disabled, describes in the way of landlord David Taran's negligence is even more frightening. She describes just some of what she and other tenants are experiencing:


"AMBULANCES STILL HAVE DIFFICULTY ACCESSING THE PROPERTIES"
Janet reported the following in email correspondence with this Indybay reporter.

"I heard gunshots on Sunday, August 17 [again on] Monday, September 1, and twice on Saturday, Sept 6.  I always call 911 and I always send [CEO David] Taran an email when this happens.

I also told him that neither the police nor ambulance drivers can get past our security gate, as was demonstrated on New Years Eve, December 31, 2007.  Richard Schaadt [of Page Mill Properties] called me on September 2, 2008, and told me that all East Palo Alto police officers had been given access devices just 2 weeks earlier!  Our gates have been locked since October of 2007.

I recently sent Captain John Chalmers, the beat captain for my neighborhood, an email telling him about the marked increase in the frequency of gunshots.  I also told him about the problem with the security gate here.  I referred to it as a DEATH TRAP.  I got an email back from Elizabeth Lam, who is a Community Services Officer for the East Palo Alto Police Dept.  She said that the fire department and police department officers had access devices for all security gates.  But she did not say anything about the fact that ambulance drivers [still] cannot get in.

"MORE OF THE SAME PROBLEMS WE'VE COME TO EXPECT WITH MAINTENANCE"

"Our hot water heater quit working on Thursday, August 28, and we were without reliable hot water for a total of 8 days.  The maintenance guy kept turning the heater on, and the heater kept turning off.  [He] said that they needed to get a part for the heater that wasn't available until the Labor Day weekend was over on Tuesday September 2nd.  September 2 came around, and Page Mill's management would not approve of the repair until Thursday, September 4."

UPDATE ON THE CASE

The exchange of legal challenges continues between the City of East Palo Alto and landlord Page Mill Properties. On Friday September 12 the city obtained a court order to compel Page Mill to produce documents it has denied city attorneys in a case that has tenants and displacement watch observers eagerly awaiting an outcome.

The constant "pay or quit" notices that Page Mill sends out are frightening. Many of the residents lack English language skills and read the letters as eviction notices. It takes about 3 months worth of rent to move to a new location, and the residents don't have that kind of money.

As one East Palo Alto resident said of Page Mill's tactics, "[If] you think it's okay to make thousands of people miserable who don't have money so that you can make millions on top of whatever you already have, you are a supreme waste of a human being."
Add Your Comments
Support Independent Media
We are 100% volunteer and depend on your participation to sustain our efforts!