How Mumia was Railroaded: a review of "The Framing of Mumia Abu-Jamal"

by Ben Davis, Socialist Worker
Author J. Patrick O'Connor will be touring the Bay Area, October 1 - 8 - The Mobilization to Free Mumia Abu-Jamal is organizing a Northern California tour by J. Patrick O'Connor, Crime Magazine on-line editor, author of the recently published book, "The Framing of Mumia Abu-Jamal." Meetings and media work is being organized in San Francisco, the East Bay, Palo Alto, Santa Rosa, and many other locations. 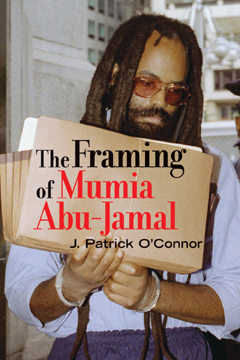 How Mumia was railroaded

Ben Davis reviews a book that provides a detailed account of how political prisoner Mumia Abu-Jamal was framed for murder.

It is a well-researched, scrupulously detailed, blow-by-blow account of the railroading of Mumia, written with a brio that makes it as gripping as any murder mystery novel. If it reads like a murder mystery, however, the mystery is unraveled at the beginning.

O'Connor starts his book with a detailed reconstruction of what happened on December 8, 1981, the night that policeman Daniel Faulkner was killed after having stopped a VW belonging to Billy Cook, Abu-Jamal's brother, at the corner of 13th and Locust in Philadelphia. Found shot at the scene, Mumia was beaten by police and later charged with killing Faulkner.

O'Connor not only details the inconsistencies in the case against Mumia but systematically shows how, when you discount the witnesses we now know to have been coerced by the prosecution, the remaining accounts all point not just to Mumia's innocence, but to another culprit.

That person, O'Connor suggests, is Kenneth Freeman, an Army vet who worked with Mumia's brother, had a gun and was in the VW with Cook when Faulkner stopped it.

The scenario that O'Connor lays out is that Cook and Faulkner got into a heated altercation in front of the VW after the stop, leading the police officer to strike Cook with his flashlight. Cook fled back into his car, on the driver's side. It was seeing his brother being hit that caused Mumia, parked in a cab across the street, to run toward the scene, at which point Faulkner turned and shot him. Meanwhile, Freeman exited the passenger door of the VW and shot Faulkner, then fled the scene.

This scenario fits the actual evidence in a way that the prosecution case does not. Freeman was subsequently killed under mysterious circumstances in 1985, his body bound, gagged, naked and dumped in a vacant lot.

AFTER LAYING this out, O'Connor recalls the context of the trial, including Philadelphia's notorious police corruption and the city's campaign of repression against MOVE, a commune led by John Africa. This was a news story Mumia covered as a journalist--earning him the lasting animus of law enforcement.

It is O'Connor's account of the trial itself, however, that is invaluable--in no small part because he makes heavy use of actual transcripts. The biases of Judge Albert Sabo and prosecutor Joseph McGill are well known and have served as basis for appeals. Still, reading their words gives a dramatic sense of the choreography of the frame-up.

To list a single example, as Mumia's lawyer Anthony Jackson attempts to establish police misconduct, given the Philadelphia Police Department's failure to do even routine tests on the crime scene that might have vindicated Mumia, Sabo summons him to a sidebar conference to block him from highlighting this for the jury:

SABO: It is strictly conjecture as to what the outcome [of the tests] would be.

JACKSON: That may be conjecture--

SABO: There is so much other evidence in the case.

JACKSON: I understand that, and it is the evidence that is not here which seems to be beneficial to the defendant, and that is what I am pursuing.

As O'Connor notes of this exchange, "Prior to even hearing the defense portion of the trial, Sabo rendered his own opinion about the case." O'Connor goes through the case, witness by witness, line by line, showing how thin the prosecution's case was, and how much it depended on suppressing evidence of likely innocence.

O'Connor is ultimately very sympathetic to Mumia. At the same time, he does lay great stress on how Mumia undermined his own case, calling him "petulant" for his refusal to cooperate with his court-appointed attorney. He wanted to represent himself, but was denied this basic right by Sabo. At times, O'Connor seems to suggest that Mumia might have been found innocent had he just behaved.

It would seem more productive to emphasize that Mumia's courtroom behavior was motivated by a desperate and justified sense that everything--an admittedly incompetent attorney, a hostile judge, a death-penalty-bent DA--was against him.

Perhaps this emphasis on O'Connor's part comes from an overestimation of the potential for fairness within the American justice system. Noting the overwhelming evidence now available, the author ends the book on a hopeful note, stating that Mumia may get a new day in court, given that the Third Circuit Court agreed to hear the constitutional issues in 2007. Those hopes were dashed when the appeals court definitively rejected Mumia's petition this July.

Still, the book is an indisputable tool for the movement that still has to be built, if Mumia is ever to be free. It destroys the case against Mumia Abu-Jamal as few others have.

Opponents of Abu-Jamal always say that his supporters should just "read the transcripts" of the trial for evidence of his guilt. Supporters can now reply: Read The Framing of Mumia Abu-Jamal.

END_OF_DOCUMENT_TOKEN_TO_BE_REPLACED
Related Categories: San Francisco | Police State & Prisons
Add Your Comments
Support Independent Media
We are 100% volunteer and depend on your participation to sustain our efforts!