Add an Event
Newswire
Calendar
Features
Home
Donate
From the Open-Publishing Calendar
From the Open-Publishing Newswire
Indybay Feature
Publish to Newswire
Add an Event
Related Categories: California | South Bay | Labor & Workers
Thousands Of SEIU UHW Workers March and Protest In SJ Against Threat Of Trusteeship
by repost
Sunday Sep 7th, 2008 6:55 AM
Thousands of SEIU UHW workers marched and rallied against a threatened trusteeship ofthe 150,000 member local by SEIU pres Andy Stern. They voted in a statement that they will use all resources and not allow a take-over of their democratic rights. This struggle is the most important battle going on since the fight in the Teamsters by Ron Kerry and the issue of corporatization of the unions is applicable to most unions in the US. 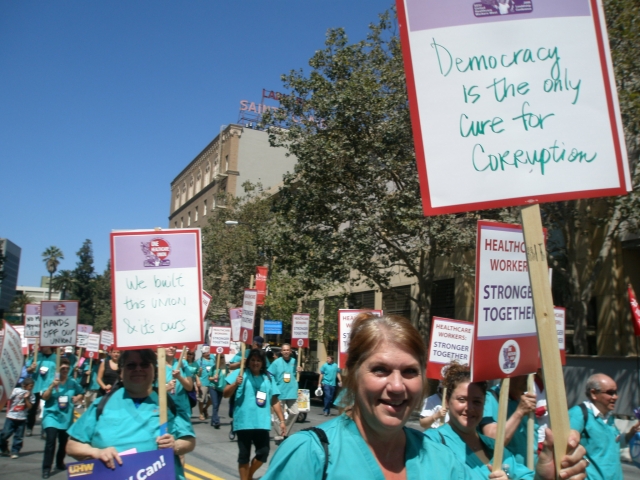 I'm at the San Jose Convention Center at the annual SEIU-United Healthcare Workers West leadership conference. You thought unity was the theme of the Democratic convention? This conference gave it a serious run for its money. When I was at the SEIU convention in Puerto Rico, my fellow bloggers and I wrote briefly about the conflict brewing between the international and this 150,000 strong California-based healthcare worker local but since then it has escalated and UHW-W intends to fight back.
On August 25 SEIU President Andy Stern announced a trusteeship hearing on whether SEIU should appoint a trustee to "take charge and control of the affairs of SEIU United Healthcare Workers-West and a trusteeship imposed over UHW-W." The hearing is to be held Sept. 26 & 27 somewhere in Northern California.
The timing is curious, coming on the heels of allegations of corruption on the part of Tyrone Freeman, head of another California healthcare workers local and a Stern appointee; it also came mere days before UHW-W's leadership conference and I can tell you from being here, if the international wants a fight, they found one.
The conference was attended by more than 2000 elected UHW-W workplace leaders and the sense of purpose and resolve among them is palpable. They are motivated, they are unified and as one woman addressing the convention put it:

The giant is awake and we are pissed.
The membership here unanimously passed a resolution vowing to fight the trusteeship:

Let it be resolved that we will fight to ensure that UHW members maintain full control of our union and oppose any attempts to unlawfully trustee our local and place it under the watch of appointed leaders from Washington, DC for purely political reasons; and
Let is be further resolved that UHW will fight to keep our members united in one statewide healthcare workers union and will use all available means, including mobilizing our 150,000 members to support our union and directing our President and Officers to take all appropriate actions including deploying the necessary resources, staff, and other means to carry out this resolution.

A good 4000 or so also marched through downtown San Jose and then held a rally, waving signs reading "We built this union and it's ours" and "Our union, our voice." They feel that Stern, with his threat of a trusteeship, wants to weaken their power by trying to divide their membership. No one here intends to let that happen.
In the short term, that fight entails deploying members to DC to meet with all 53 members of California's congressional delegation. How many of the 53 will actually meet with UHW's members is unclear, of course, but they intend to try. In addition, leadership here repeatedly rallied the crowd of 2000 to take off work on Sept. 26 & 27 to attend the trusteeship hearing and bring 10 co-workers with them. They want to overwhelm the international with 20,000 plus to let them know they're not going down without a fight. There is a sense from people I've spoken to that the trusteeship is probably inevitable; they're calling the hearing a "kangaroo court." But at the same time members are saying quite simply "We won't go", referring to their refusal to be taken from their union without their say.
In the longer term, what UHW-W hopes to achieve is 1. to build one statewide healthcare workers union in California; and 2. to, as they put it, "reform SEIU into a democratic union with leadership accountable to its members." At the heart of this conflict, it's really union democracy that people are fighting to preserve.
Robert at calitics nails why this matters for all of us.

Whatever the outcome, there is a strong commitment to democracy among the 2,000 members here - democracy in the workplace, democracy in their union, democracy in their nation. Despite the internal politics that is an extremely positive sign. The labor movement has been at the forefront of social democratic politics in this country for over 100 years. When labor is strong, progressive politics are strong. Which makes the SEIU's efforts to trustee UHW all the more disappointing, as we need unions to be laser-focused on this election and on the policy battles that will begin as soon as the dust settles in November.
On a more local level, it also matters to us here in California because UHW-W has literally been one of the most reliable and most generous progressive partners in our fights here in California. In its attempt to undermine UHW-W's leadership, the International is actually undermining the progressive movement in California as well.
For a more complete rundown of the conflict you can read SEIU-UHW shop steward Shayne Silva's piece over at Open Left.
(Disclaimer: SEIU-UHW flew me up to San Jose to cover their leadership conference.)

Over the past several weeks, SEIU – arguably the nation’s most politically powerful union and the most prominent financial patron of the U.S. progressive movement – has been rocked by a series of scandals that call into question the basic integrity of the organization's leadership and threaten many of the progressive causes in which SEIU has become an integral player. The widening web of serious financial improprieties alleged in a stunning series of investigative reports by LA Times writer Paul Pringle, compiled here, involves high ranking officers of SEIU, all of whom are personal protégés and appointees of SEIU President Andy Stern and SEIU Secretary-Treasurer Anna Burger.
At the heart of these scandals is not the series of corrupt acts uncovered by Pringle, but Stern and Burger’s relentless drive to consolidate decision-making power among a small group of appointed leaders and staff and to eliminate any possible base of political opposition to their direction for the union, regardless of the costs to SEIU members and other working families. These costs include the theft of hard-earned union dues from $9.00 an hour homecare workers, long term reputational damage to SEIU and the labor movement as a whole, and negative consequences for progressive candidates and causes that Stern and Burger purport to champion.
In order to eliminate the most prominent whistleblowers in SEIU and divert attention from the growing scandals engulfing them and their hand-picked leaders all in one move, Stern and Burger announced on the first night of the Democratic Convention that they were calling hearings on September 22nd and 23rd to seek an International Union takeover of United Healthcare Workers - West (UHW). The main pretext for these trusteeship hearings against UHW is a recycled set of charges, already refuted thoroughly before. Labor journalist Steve Early, who has written extensively on Stern's ongoing efforts to suppress UHW's dissent, gives detailed background in a new CounterPunch article cross-posted on OpenLeft.
A politically-motivated trusteeship of UHW would consolidate the anti-democratic trend in SEIU and greatly elevate the threat it poses to labor and the broader progressive movement. The International Union’s top staff and massive resources from across the nation would be bogged down, a month before the November election, in an all out civil war that will compound the damage that’s already been done and seriously weaken us all for years to come. It's time for progressive voices to join UHW members in opposing this disastrous trusteeship threat and call for a peaceful resolution of the dispute within SEIU before it’s too late. 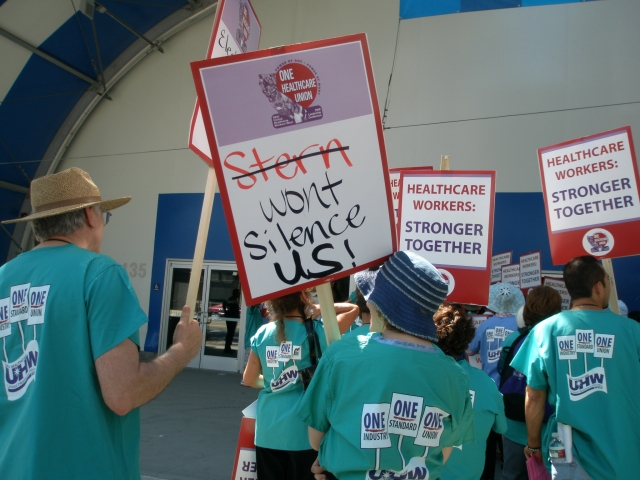 original image (2048x1536)
4,000 California healthcare workers marched against a threatened trusteeship of their Local. Members are angry to the president Andy Stern
http://www.mydd.com/story/2008/9/6/144940/...
Add Your Comments
LATEST COMMENTS ABOUT THIS ARTICLE
Listed below are the latest comments about this post.
These comments are submitted anonymously by website visitors.