by Sharat G. Lin
Antinuclear protesters gathered at the Lawrence Livermore National Laboratory on the 63rd anniversary of the U.S. dropping the atomic bomb on Nagasaki. They were joined by Reverend Nobuaki Hanaoka, who survived that devastating attack and called for the “complete elimination of nuclear weapons from the face of the earth.” 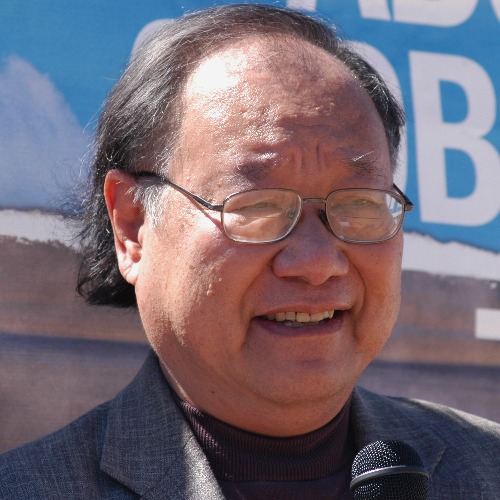 At 11:02 a.m. on Saturday, August 9, 2008, antinuclear protesters observed a moment of silence for the tens of thousands of civilians who were instantly killed when the U.S. dropped an atomic bomb on the city of Nagasaki, Japan 63 years ago. The total number of deaths from the blast are believed to have reached 70,000-80,000 by the end of 1945.

Peace, social justice, and environmental activists from throughout Northern California gathered at the northwest corner of the Lawrence Livermore National Laboratory to protest the continuing research by the U.S. Department of Energy to develop a new generation of nuclear weapons. They called for “a nuclear-free future.”

A sprawling “nuclear maze” displayed an exhibition on the nuclear blast damage to Hiroshima and Nagasaki, the U.S. nuclear weapons program, uranium mining, problems of nuclear waste disposal, and the adverse biological effects of fissile nuclear materials. The exhibit drew attention to the more than one thousand nuclear bomb tests that the United States has conducted since the beginning of the Manhattan Project. The maze was set up at the corner of Patterson Pass and Vasco Roads, the usual assembly point for the annual antinuclear protests.

Cara Bautista of Peace Action West (http://www.peaceactionwest.org), one of the 17 cosponsoring organizations, opened the program. She introduced Kaylah Marin, a Hip Hop and neo-soul vocalist, renaissance artist, guitarist, and writer who sang and performed spoken word for the crowd.

The keynote speaker was Reverend Nobuaki Hanaoka, who was less than 8 months old when the U.S. atomic bomb exploded in Nagasaki. He told of how he and his family were spared from the blast and firestorm, but that his mother succumbed to radiation sickness within six years, followed by his sister, and then his brother. In 1978, he helped organize the Friends of Hibakusha (survivors of the bombings), serving as its first chairperson, to support atomic bomb survivors of Hiroshima and Nagasaki in the United States, and to advocate for a nuclear-free world.

In reviewing the circumstances of the U.S. first-use of atomic bombs on Hiroshima and Nagasaki, Reverend Hanaoka pointed out that Emperor Hirohito had already been considering the conditions of surrender well before the first A-bomb was dropped on Hiroshima on August 6, 1945. This fact had already been communicated to President Truman by the Soviets. Thus, dropping the bomb on Hiroshima, Hanaoka argued, was militarily unnecessary. The real purpose of dropping the uranium-235 bomb was to send a clear signal to the Soviet Union that the United States was the global superpower emerging from the ashes of World War II.

One of several purposes of the plutonium-239 bomb dropped on Nagasaki was to prove the effectiveness of both types of fission warheads on human populations. The timing of the bombing was advanced in response to the Soviet invasion of Japanese-occupied Manchuria just eleven hours earlier. The United States remains the only country in history to ever use nuclear weapons in combat, and the only country to use them in first strikes.

Reverend Hanaoka called for the “complete elimination of nuclear weapons from the face of the Earth.” Referring to the Nuclear Non-Proliferation Treaty (NPT) that divides the world between the five original nuclear powers (permanent U.N. Security Council members) and all other countries, he said, “NPT for other countries is not going to work.” He added that the U.S. claimed to be enforcing the NPT by attacking Iraq, but the subsequent U.S. threats to Iran’s security only encouraged Iran to “proliferate.”

Despite the NPT, the U.S. continues to develop and refine its own nuclear arsenal of over 10,000 warheads at centers like the Lawrence Livermore National Laboratory (LLNL) and the Los Alamos National Laboratory (LANL) in New Mexico. LLNL is one of two U.S. government facilities in the San Francisco Bay Area that handle advanced nuclear weapons, the other being the Navy facility operated with the assistance of Lockheed Martin in Sunnyvale for assembling submarine-launched Trident nuclear warheads.

Reverend Hanaoka called for an end to all such work that only increases the rationale for first use and the risk of nuclear terrorism. He concluded by saying that we must “never allow another Hiroshima and Nagasaki anywhere in the world.”

Marylia Kelley of Tri-Valley CAREs (http://www.trivalleycares.org), which has been organizing annual non-violent resistance actions for decades against nuclear weapons work at Lawrence Livermore National Laboratory, explained, “We are here on August 9th because Livermore Lab has been chosen to develop the United States’ next new nuclear bomb, the so-called Reliable Replacement Warhead. We are here because Livermore Lab is home to more than a thousand pounds of plutonium, which makes us all vulnerable to a catastrophic release. And we are here to show the government and the public that there is another future possible, one based on global nuclear disarmament. We say ‘never again’ to the use of nuclear weapons.”

A lone counter-protester sat in his army jeep with signs reading, “63 years ago B-29s saved 1 million GIs and 5 million Japs.” Perhaps oblivious to the derogatory implication of his ethnic slur, he seemed equally unaware of Japan’s active feelers through the Soviet Union to find a way to surrender while seeking only to preserve to honor of the monarchy before the first bomb was dropped on Hiroshima.

Each year on the anniversary of the A-bomb attacks on Hiroshima and Nagasaki, Tri-Valley CAREs and supporting peace and justice groups have organized original and uniquely creative actions at the gates of Lawrence Livermore National Laboratory. Some actions have involved non-violent civil disobedience.

For example, on August 6, 2007, antinuclear resisters staged a die-in across the pavement blocking the West Gate to LLNL. Fellow protesters drew chalk outlines around the “fallen bodies” to leave a chilling symbol of the human toll of nuclear weapons developed at LLNL. A score of antinuclear resisters, including priests and nuns, then faced off with the LLNL Protective Service police before being arrested by Alameda County Sheriff’s deputies.

On August 6, 2006, non-violent civil disobedience was considered, but then abandoned in favor of leaving flowers of peace on the chain-link West Gate. That protest featured an immense 25-meter long balloon in the shape of a ballistic missile.

Among the many cosponsoring organizations is the Livermore Conversion Project, which advocates converting LLNL to peaceful humanitarian research along the lines of its sister lab, the Lawrence Berkeley National Laboratory (LBNL). The Mount Diablo Peace and Justice Center (http://www.mtdpc.org) has also long been a regular supporter of the annual actions protesting nuclear weapons research at LLNL. 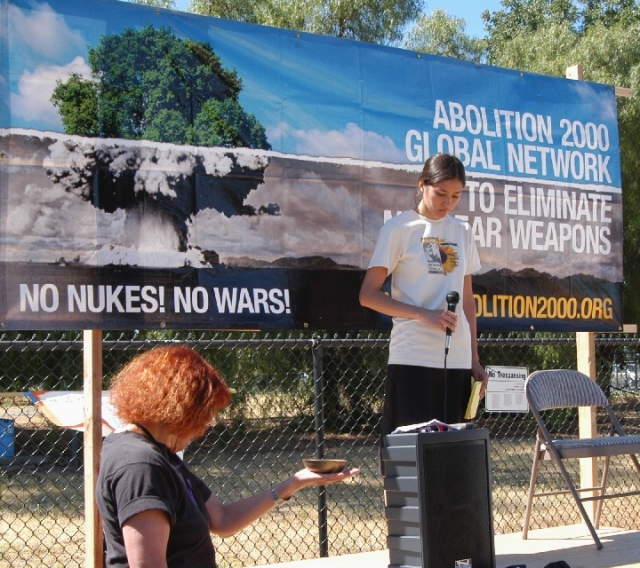 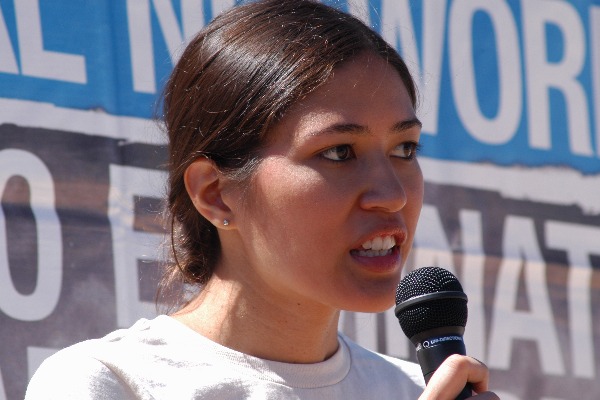 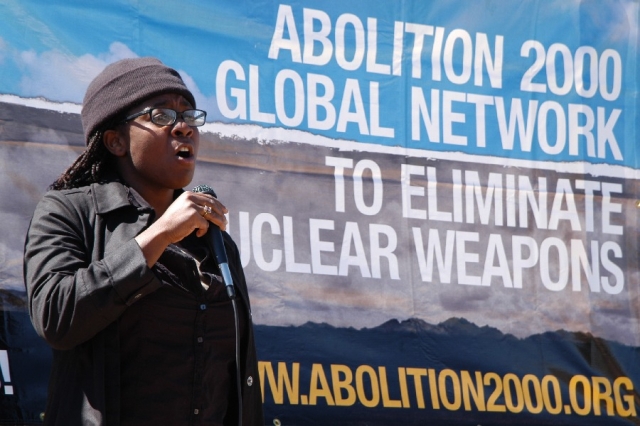 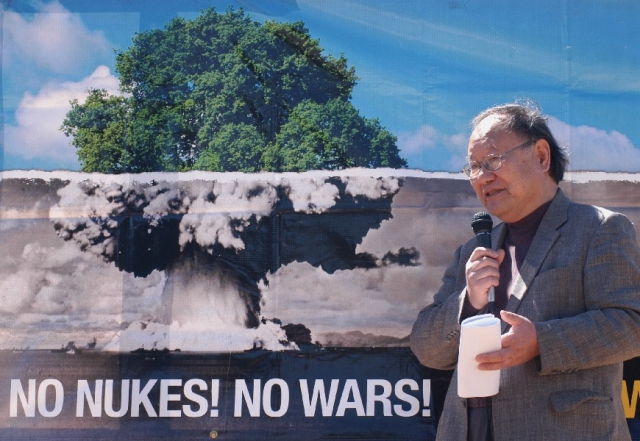 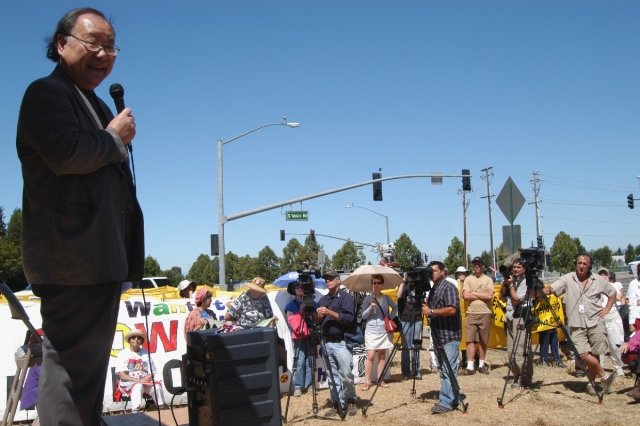 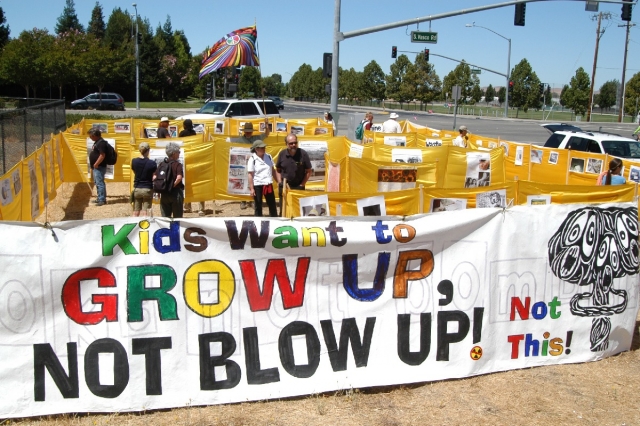 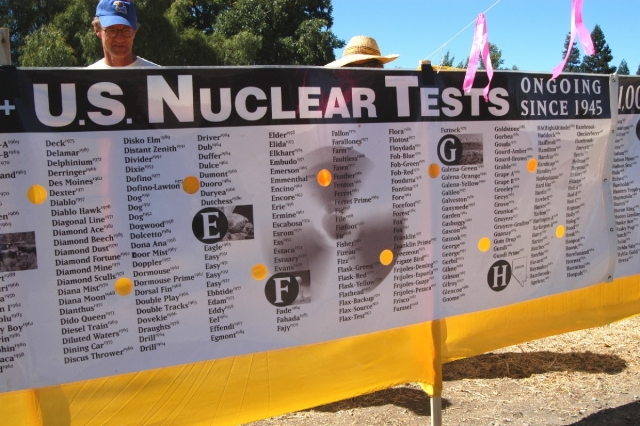 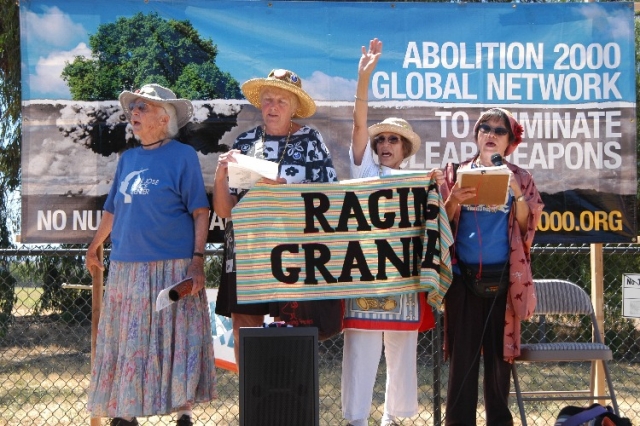 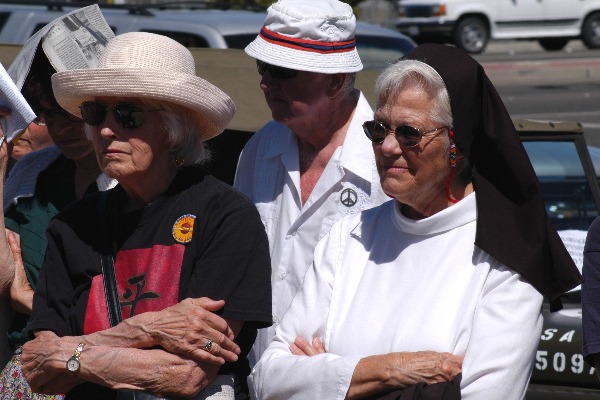 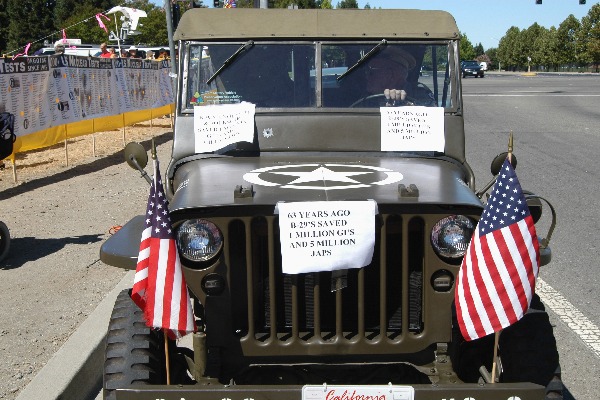 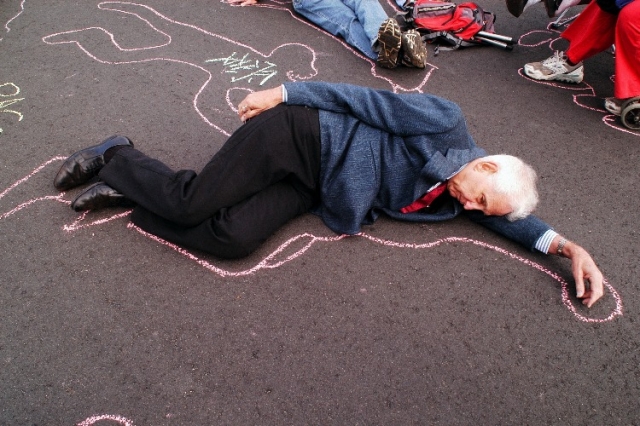 original image (750x500)
August 6, 2007: Daniel Ellsberg, who released the Pentagon Papers in 1971, participating in a die-in against nuclear weapons in front of the LLNL West Gate.
END_OF_DOCUMENT_TOKEN_TO_BE_REPLACED
§2007
by Sharat G. Lin 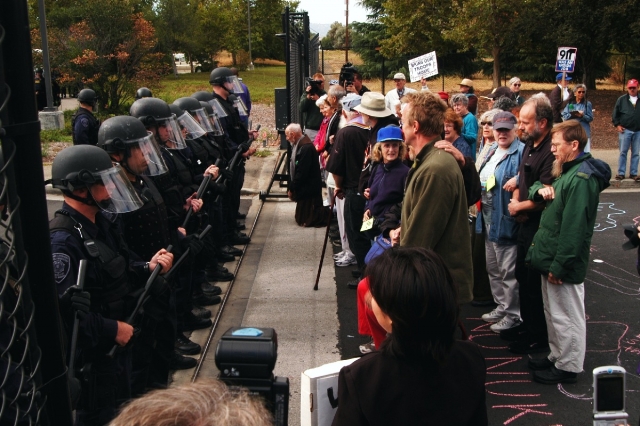 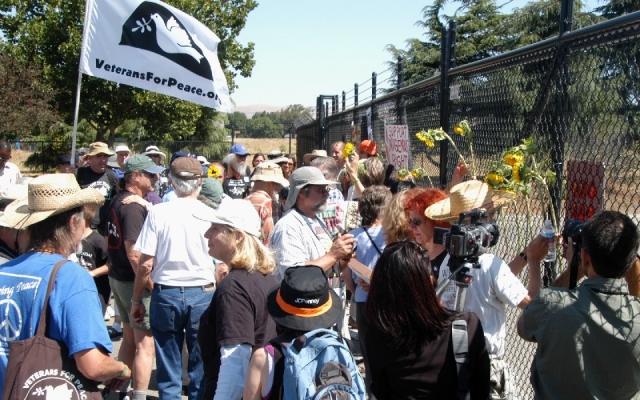 original image (960x600)
August 6, 2006: Antinuclear protesters placing flowers on the LLNL West Gate.
END_OF_DOCUMENT_TOKEN_TO_BE_REPLACED
Add Your Comments
Latest Comments
Listed below are the latest comments about this post.
These comments are submitted anonymously by website visitors.
TITLE
AUTHOR
DATE
Thanks for nice coverage!
Carl A.
Support Independent Media
We are 100% volunteer and depend on your participation to sustain our efforts!