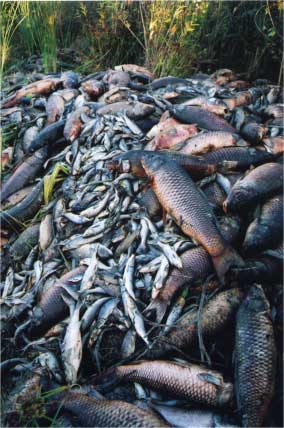 Yesterday the California Senate failed to pass AB 1806, the landmark bill by Assemblymember Lois Wolk (D-Davis) that would have required the state and federal Delta export pumping operations to fully mitigate for the damage they have caused to fisheries.

The bill would have required fish rescue contingency plans in the event of future fishery disasters like the one that took place at Prospect Island in the northern Sacramento-San Joaquin Delta in November 2007. During last year's fish kill, thousands of striped bass, Sacramento blackfish, Sacramento splittail, black bass, bluegill, catfish, threadfin shad and other species perished after the Bureau of Reclamation drained the island during a levee repair operation.

"Unfortunately, they just lifted the call and AB 1806 failed passage on a vote of 18-21," said Diane Colborn, Staff Director for the Water Parks and Wildlife Committee. "Reconsideration was granted, but it does not look like we will be able to get the votes to get the bill off the Senate floor."

Senator Florez also switched his vote from aye to no which brought it down to 18 votes. "We tried to lobby the members to get the last few votes, but unfortunately the fact that the bill went on call gave the opposition more time to lobby members to move into the no column," said Colborn.

John Beuttler, Conservation Director of the California Sportfishing Protection Alliance (CSPA), expressed disgust when he heard the final vote. Beuttler stated, "This bill was to be the beginning of the delta fishery restoration process and would have provided funds for the state's impacted salmon fishery. Its defeat is a slap in the face to California's commercial and recreational anglers."

Beuttler worked with Wolk's office in the drafting of the bill and its introduction in the State Assembly. Once introduced, CSPA mounted a letter campaign at each stage of the bill's progress, in the Assembly Water, Parks and Wildlife Committee, on the Assembly floor, at the Senate's Natural Resources & Wildlife Committee and the Senate Appropriations Committee. Beuttler of CSPA and other fisheries representatives testified at many of the committee hearings.

Richard Pool, owner of Pro-Troll and organizer of the Water 4 Fish campaign, was disappointed by the bill's defeat because it would have been a major step forward in the restoration of Central Valley salmon and steelhead and California Delta striped bass, delta smelt, longfin smelt, threadfin shad, green sturgeon, white sturgeon, steelhead and other species.

"We were counting on this bill as a funding mechanism for hundreds of projects needed to recover salmon," said Pool. "In spite of our successful efforts to move the bill through the Assembly and two Senate Committees, in the end we were outgunned by the intense lobbying of the water contractors and the administration. The bill is dead for this year."

On a positive note, Pool said, "Do we give up? Absolutely not. We come back next year better organized and with all the additional grassroots firepower we can muster. We won’t give up until we get the funding for mitigation and fish recovery.If you are as mad as we are, take the action that will help the most - get everyone you know to sign onto Water4Fish.org. Click and send letters to the politicians and give us the powerful proxy ammunition we can use."

The passage of this bill was particularly urgent in light of the closure of commercial and recreational salmon fishing in ocean waters off California and Oregon and recreational salmon fishing in Central Valley rivers this year, spurred by the collapse of Sacramento River fall chinook salmon populations. Although the Bush and Schwarzenegger administrations blame "ocean conditions" for the collapse, a coalition of fishing groups, Indian Tribes and conservationists points to huge increases in water exports and a decline in water quality in the Sacramento-San Joaquin River Delta as the major causes of the dramatic fishery decline.

While Central Valley salmon populations are in a state of collapse, four Delta pelagic (open water) fish species - delta smelt, longfin smelt, juvenile striped bass and threadfin shad - have declined to their lowest record population levels. A team of state and federal scientists have pinpointed three major factors behind the decline: (1) increases in Delta water exports in recent years, (2) toxics and (3) invasive species. More recently, two scientific reports concluded that releases of high concentrations of ammonia in treated sewage water by the city of Sacramento may also be contributing to the decline.

The legislation was supported by the California Sportfishing Protection Alliance, the Northern California Council of the Federation of Fly Fishers, the California Striped Bass Association, the Recreational Fishing Alliance, the Allied Fishing Groups, the American Sportfishing Association, the Pacific Coast Federation of Fishermen’s Associations and many regional fishing organizations. The Planning and Conservation League, the National Resources Defense Council and other environmental groups are also backing the bill.

The fishing and environmental groups did a great job of pounding the legislature with letter and phone calls in support of AB 1806. However, the Senators who voted against the bill apparently considered the power of big money to be more important than huge grassroots support for the measure by a broad coalition of organizations.

“The death of tens of thousands of fish, including striped bass and other sportfish, could have been prevented with some basic planning," said Lois Wolk, after AB 1806 passed through the Senate Appropriations Committee intact without amendments on Thursday, August 7.
"This bill is a strong first step towards preventing further losses to our state’s fisheries."

Unfortunately, the majority of the Senate apparently believes that mitigation for the millions of salmon, steelhead, delta smelt, longfin smelt, threadfin shad, striped bass killed by the operation of the Delta pumps every year is not needed. Shame on all of the Republicans and on the agribusiness-controlled Democrats like Florez that voted against the bill!

For more information, go to http://www.calsport.org or http://www.water4fish.org.
Add Your Comments
Support Independent Media
We are 100% volunteer and depend on your participation to sustain our efforts!