Add an Event
Newswire
Calendar
Features
Home
Donate
From the Open-Publishing Calendar
From the Open-Publishing Newswire
Indybay Feature
Publish to Newswire
Add an Event
Related Categories: East Bay | Global Justice & Anti-Capitalism | Government & Elections
Spokescouncil Against the Conventions (RNC/DNC), July 27th
by U.A. in the Bay
Wednesday Jul 23rd, 2008 8:46 AM
The next U.A. in the Bay organizing meeting for the Republican and Democratic National Conventions is set for July 27th in the East Bay. Come and learn about what's already planned. Bring proposals and ideas. Network and plan with other groups in the area who are going. 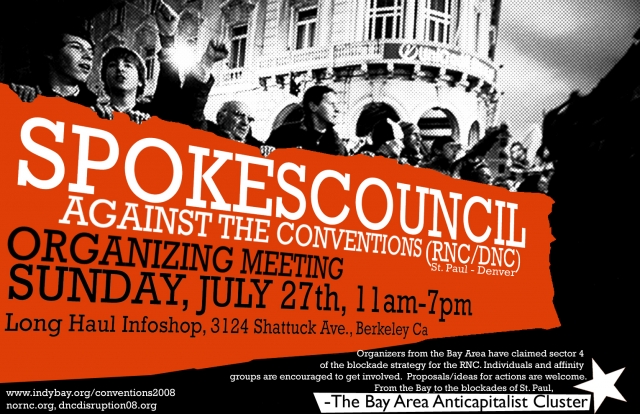 original image (1530x990)
On July 20th at the "DNC/RNC Bay Area Consulta" in San Francisco, the first meeting of local activists interested in participating in direct actions against the Democratic and Republican national conventions, plans and logistical concerns from both DNC and RNC organizers were presented.

In discussions that followed at the consulta, the clear majority of Bay Area and Santa Cruz participants favored directing their efforts toward the RNC actions.

The RNC Welcoming Committee has come up with a "Swarm, Seize, Stay" strategy of dividing St. Paul, Minnesota into sectors to facilitate coordination of blockades and other creative resistance on September 1st, 2008, the first day of the Republican National Convention.

U.A. in the Bay participants adopted Sector 4 for the RNC actions. At the next organizing meeting, individuals and affinity groups are encouraged to get involved in planning for the taking of Sector 4 in St. Paul. Proposals/ideas for actions are welcome. Transportation and housing will be discussed, as will a proposed skillshare and benefit scheduled for August 10th.

Time and/or space will also be made available for those interested in participating in the disruptions at the DNC Convention in Denver August 25th -28th.

Related Info: http://nornc.org | http://dncdisruption08.org
Add Your Comments
LATEST COMMENTS ABOUT THIS ARTICLE
Listed below are the latest comments about this post.
These comments are submitted anonymously by website visitors.