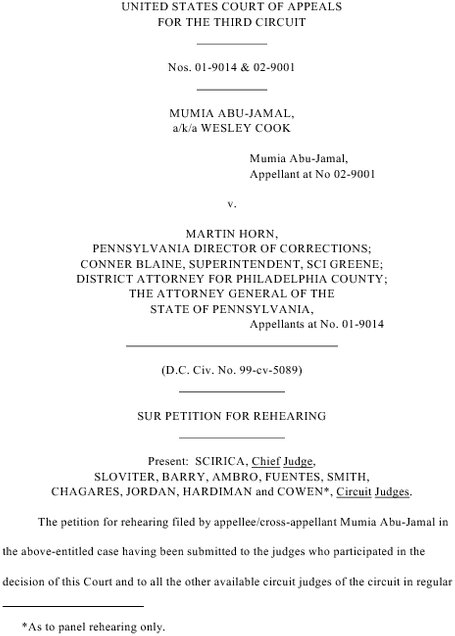 Today our Petition for Rehearing and Rehearing En Banc, submitted on behalf of my client, Mumia Abu-Jamal, was denied by the U.S. Court of Appeals for the Third Circuit. Simply put, we did not receive the needed majority vote from the nine sitting judges; at least five votes for a rehearing were necessary. However, Justice Thomas L. Ambro continues to urge the granting of relief on the issue of racism in jury selection. That position, as detailed in his brilliant dissenting opinion of March 27, 2008, will continue to serve as a beacon of hope as we press on for a new trial and Mumia’s freedom. Judge Ambro said that the “core guarantee of equal protection, ensuring citizens that their State will not discriminate on account of race, would be meaningless were we to approve the exclusion of jurors on the basis of . . . race. . . . I respectfully dissent.” A copy of today’s decision is attached.

Mumia and I had a legal conference this afternoon. He, as I, was stunned by the federal court’s refusal to grant relief since it flies in the face of established legal precedent in both the U.S. Court of Appeals and the U.S. Supreme Court. I am furious because racism continues to raise its ugly head in this country, and should have no place in our legal system. The indisputable facts are that the prosecutor engaged in racism in selecting the jury in this case, and that bigotry lingers today in Philadelphia. It would be naive not to realize that this case continues to reek of politics and injustice.

We will be seeking relief in the Supreme Court. The Petition for Writ of Certiorari will be filed by October 20, 2008, unless there is an extension. The racism issue will be presented, along with the fact that the prosecutor made misrepresentations to the jury in order to obtain a murder conviction against Mumia.

My goal remains a complete reversal of the conviction, even though the federal court has already granted a new jury trial on the question of the death penalty. We will not rest until Mumia is free.

[RobertRBryan [at] aol.com]
END_OF_DOCUMENT_TOKEN_TO_BE_REPLACED
Related Categories: U.S. | Police State & Prisons
Add Your Comments
Latest Comments
Listed below are the latest comments about this post.
These comments are submitted anonymously by website visitors.
TITLE
AUTHOR
DATE
Mumia Denied Appeal for New Trial
The Mobe
Support Independent Media
We are 100% volunteer and depend on your participation to sustain our efforts!