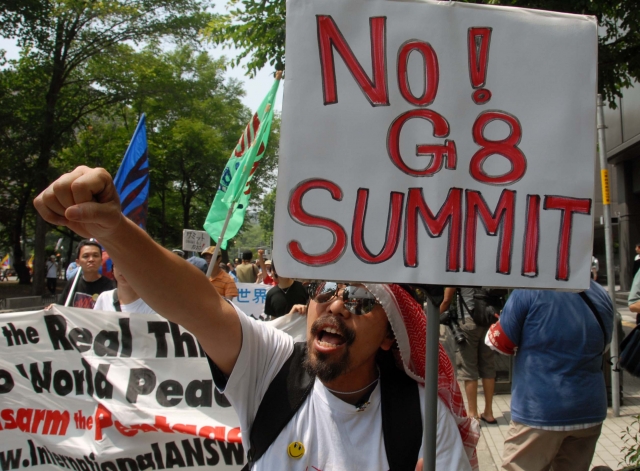 original image (2508x1848)
On July 7-9 the G-8 countries held their annual meeting high above Lake Toyoaka in Hokkaido Japan at an exclusive spa resort. This is part of the usual pattern of the annual G-8 meetings to hold them in the most remote areas possible. Hokkaido, a land of beautiful lakes and volcanos is the most rural and least populated of the four major islands that make up Japan. The Japanese government in its rush to ingratiate itself to the bigger imperialist powers spent $250 million in security measures and deployed 22,000 national police to Hokkaido and another 20,000 were on reserve in Tokyo. If these meetings had been held in Tokyo the demonstrations would have been massive and militant.

All the G-8 countries; Germany, France, Russia, Italy, England, Japan and of course the U.S. make up less then 35% per cent of the world’s population but control the great majority of the wealth. It is inconceivable that the emerging economies of Brazil, China, India, were not included, but they along with Mexico and South Africa got to have meetings on the side. (The little G-5)

There was no real agreement amongst these imperialist countries as to how to carve up the world for themselves. These countries don’t even represent their own populations, but just the rich corporate and banking elite of their respective capitalist class. The one agreement that was reached (without accountability) was that the G-8 countries would reduce greenhouse gas emissions by 50% by the year 2050, 42 years from now. As Fidel Castro commented in his reflections of July 15; that is about the time that hell freezes over. In a rational world, with the recent revelation that the ice of the North Pole has completely broken up and sea coral that is home to 25% marine life has basically eroded, a meeting of this type would declare some sort of international emergency. But these are the leaders of world capitalism, a system that is so unplanned and reckless that it plows ahead devouring everything in its path. 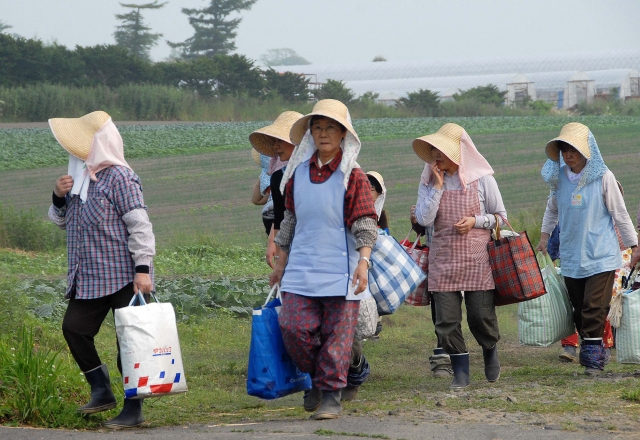 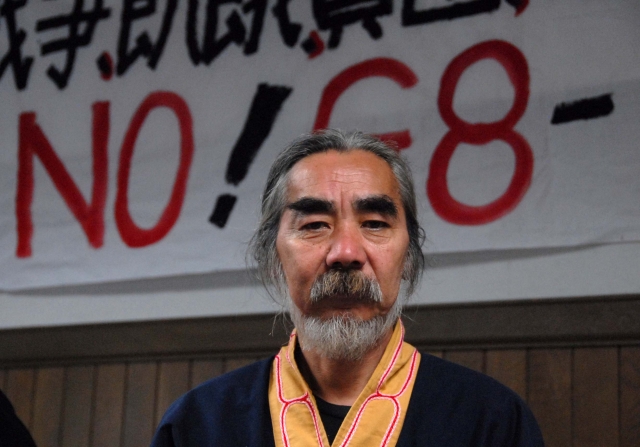 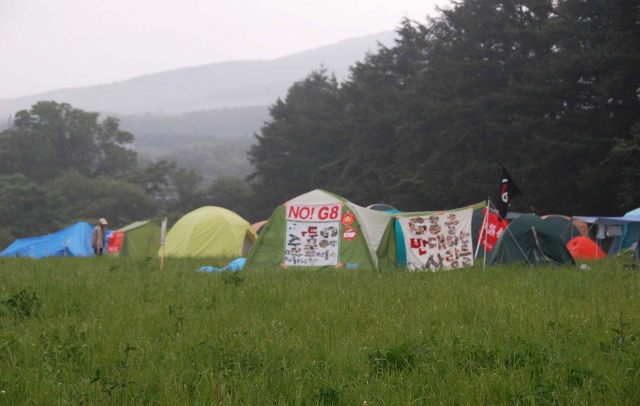 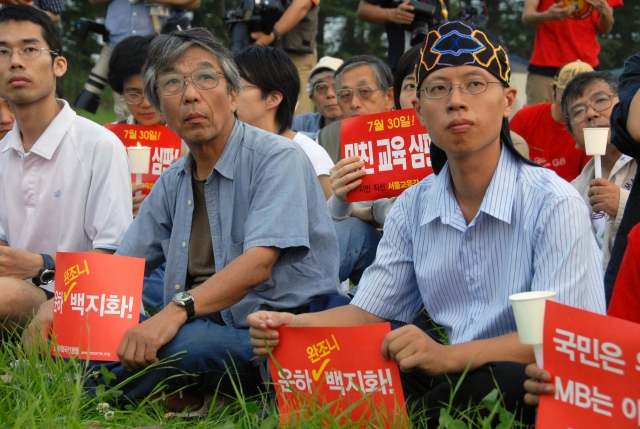 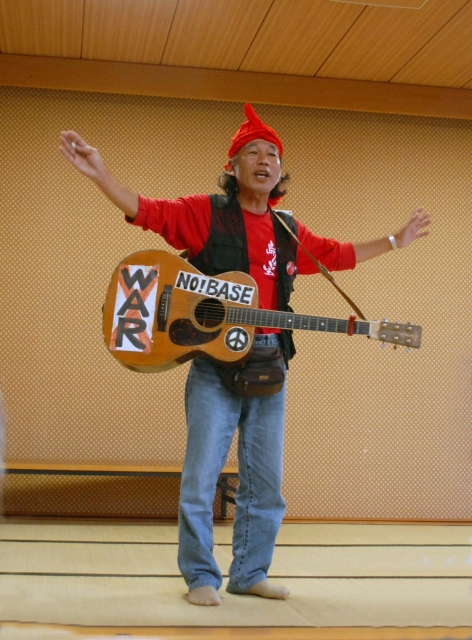 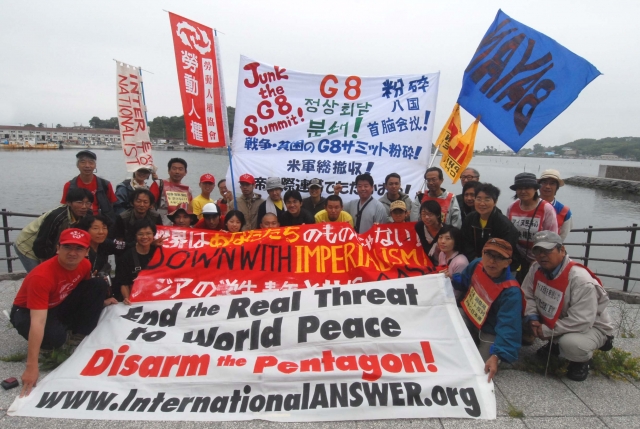 original image (2664x1788)
The Asian Wide Campaign Against Japanese and U.S. Imperialism (AWC) organized international groups to join with them for 5 days of protest during G-8. These included International League for Peoples Struggle (ILPS) and Bayan from the Philippines, Korean Streetnet International, Taiwan Labor Rights Association, Asian Students Association from Hong Kong, Migrante Japan a group organizing for the rights of immigrant workers in Japan, and the ANSWER Coalition-U.S.
§Massive Police Prescence At All Of The Protests
by Bill Hackwell Saturday Jul 19th, 2008 4:29 PM 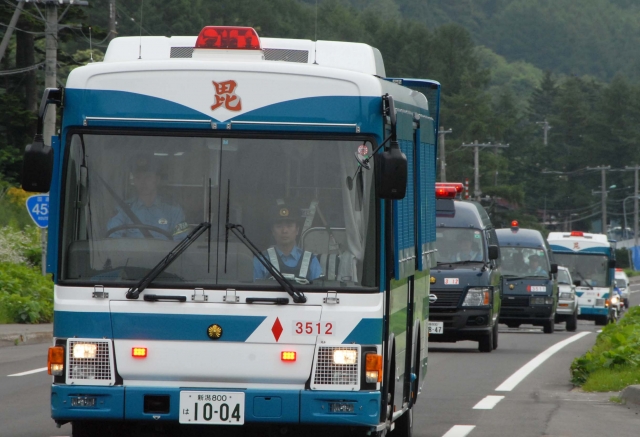 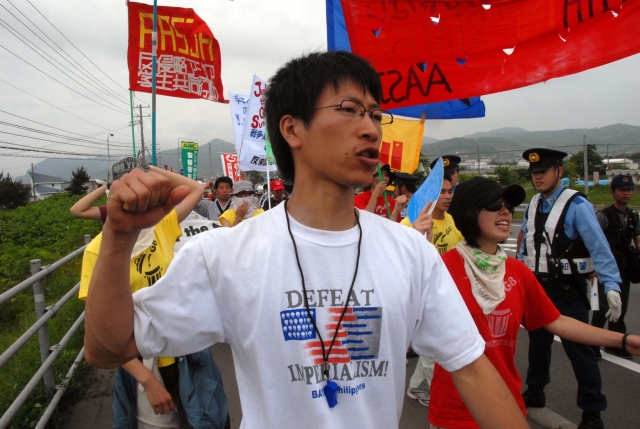 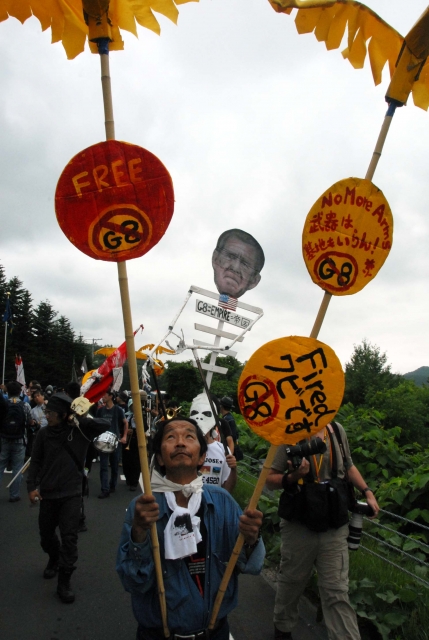 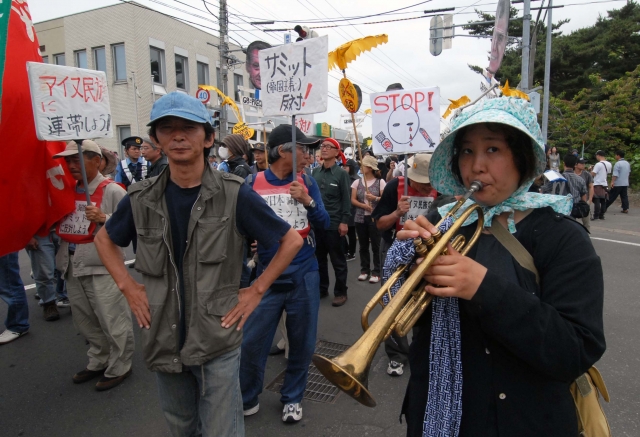 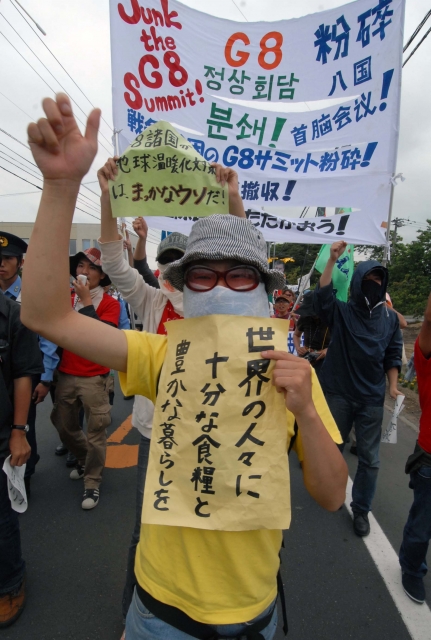 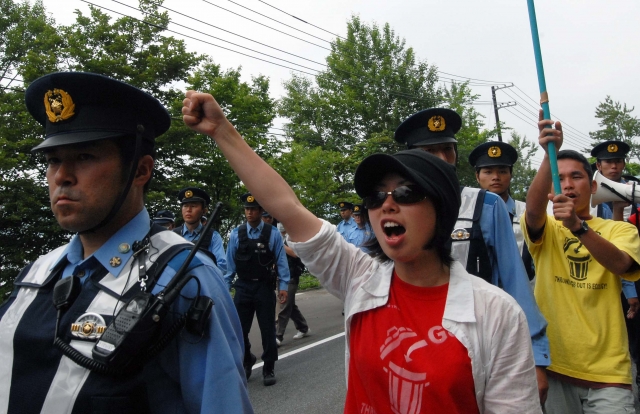 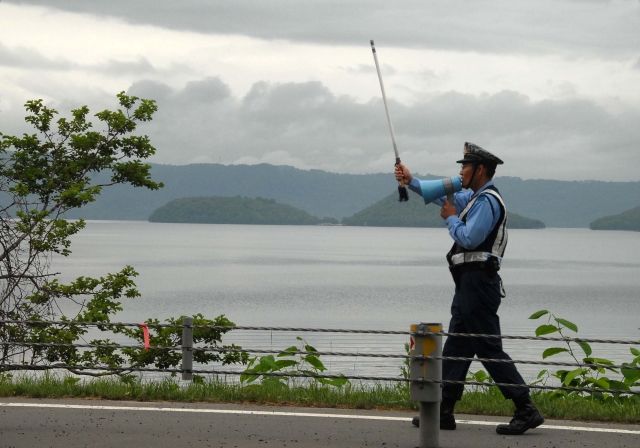 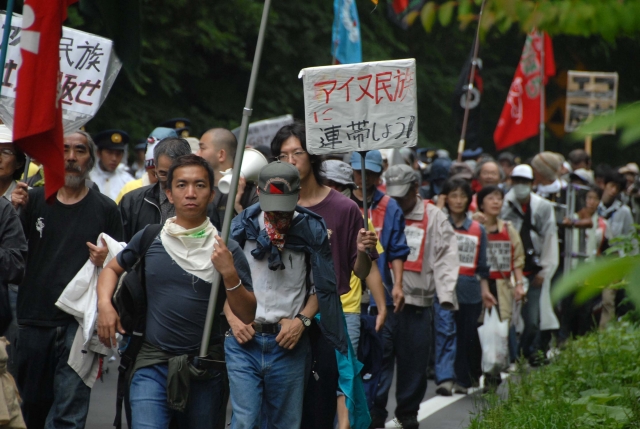 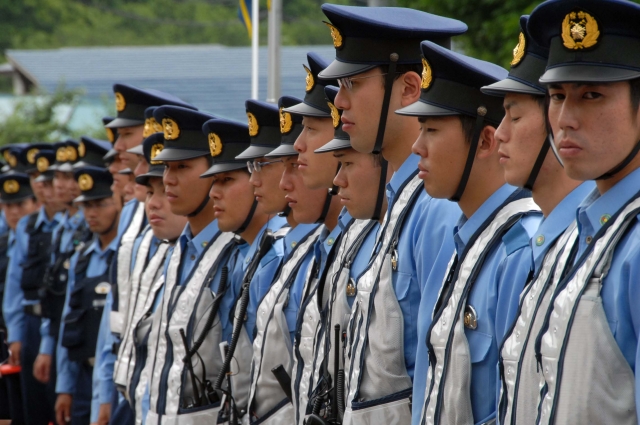 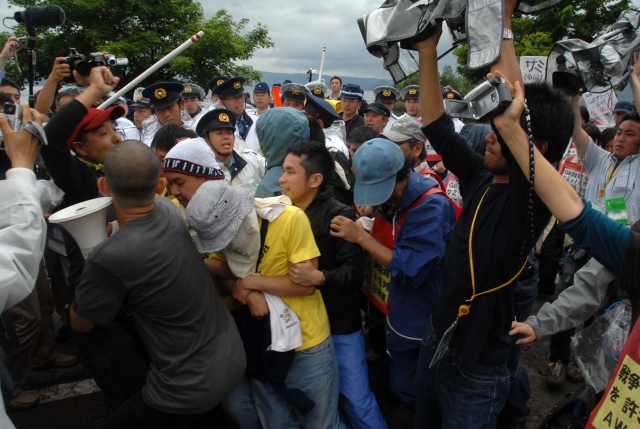 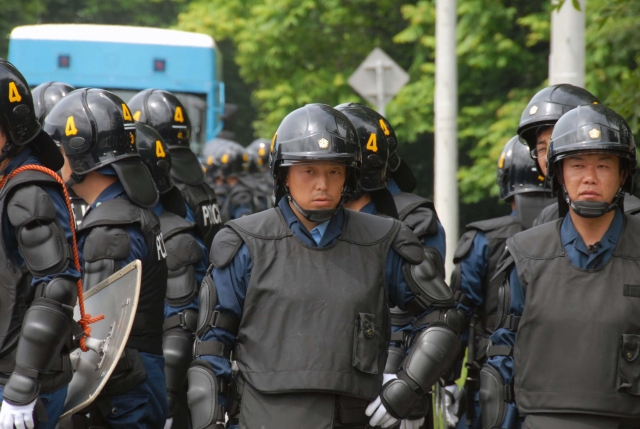 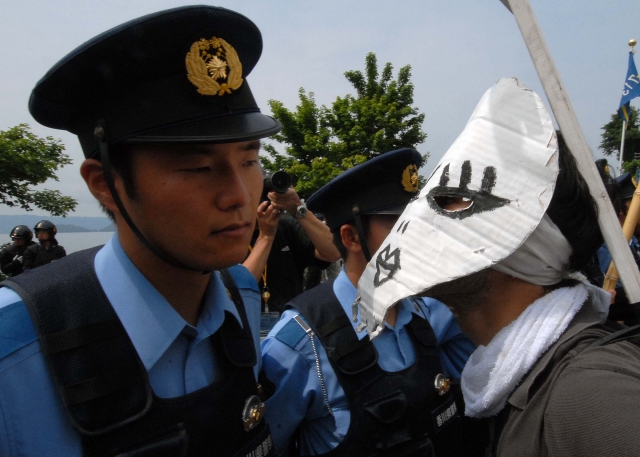 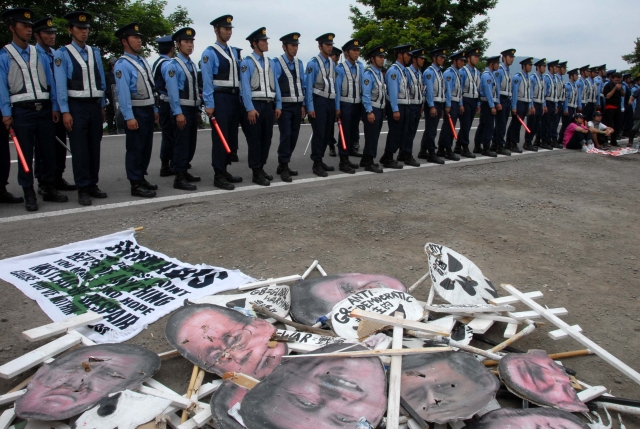 original image (2896x1944)
http://www.billhackwell.com
Add Your Comments
LATEST COMMENTS ABOUT THIS ARTICLE
Listed below are the latest comments about this post.
These comments are submitted anonymously by website visitors.