Add an Event
Newswire
Calendar
Features
Home
Donate
From the Open-Publishing Calendar
From the Open-Publishing Newswire
Indybay Feature
Publish to Newswire
Add an Event
Related Categories: Santa Cruz Indymedia | Education & Student Activism | Labor & Workers
AFSCME on Strike During New Student Orientations at UCSC
by ~Bradley (bradley [at] riseup.net)
Thursday Jul 17th, 2008 9:11 PM
Incoming UC Santa Cruz students and their families got an official orientation to college on July 17th while campus service workers were striking for the fourth day in a row. Since 2004, the Student and Worker Coalition for Justice (SWCJ) at UC Santa Cruz has been working to spread awareness and solidarity with the hardest-working and lowest-paid employees at the University of California (UC). In the last year alone, the demand to end poverty wages at the UC has been carried far and wide, including meetings of the UC Regents, dorms, dinning halls and classrooms, an alumni fundraiser luncheon, a $1,000 a plate dinner with Chancellor George Bluementhal, the Chancellor's inauguration, Highway 1, as well as to representatives in Sacramento. Service workers are vital to the UC, however AFSCME, the union representing the workers, reports that they are nowhere near reaching a fair settlement with the UC. 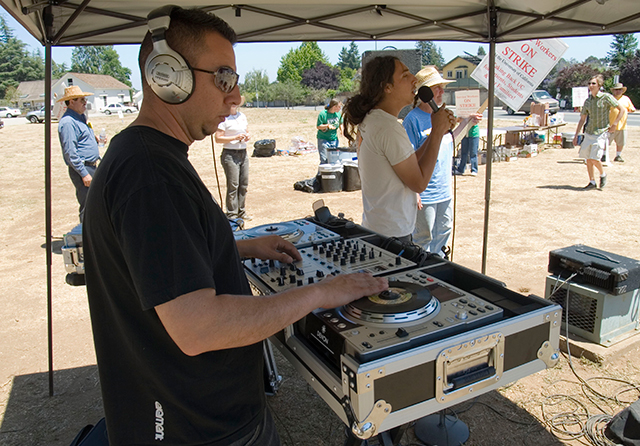 A DJ spins Reggaetón while workers, students and other community members picket in the intersection of Bay and High at the base of UC Santa Cruz. 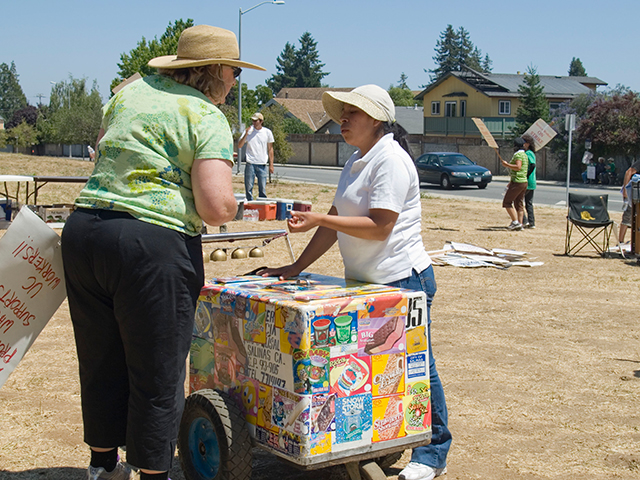 After being under the sun for a while, it can be nice to have a paleta.
§Tim Fitzmaurice Holds Class Outside
by ~Bradley Thursday Jul 17th, 2008 9:11 PM 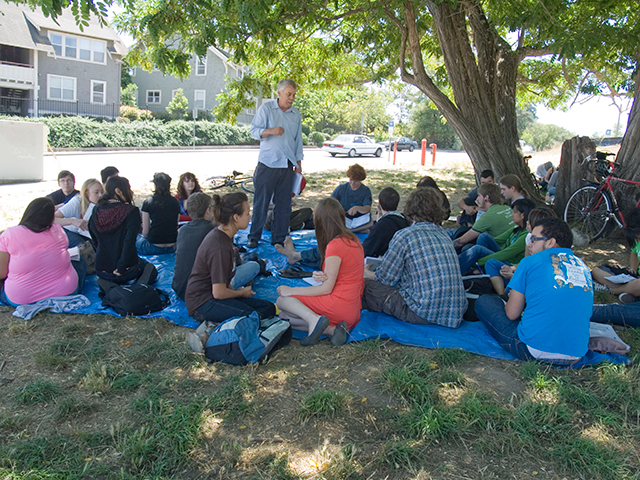 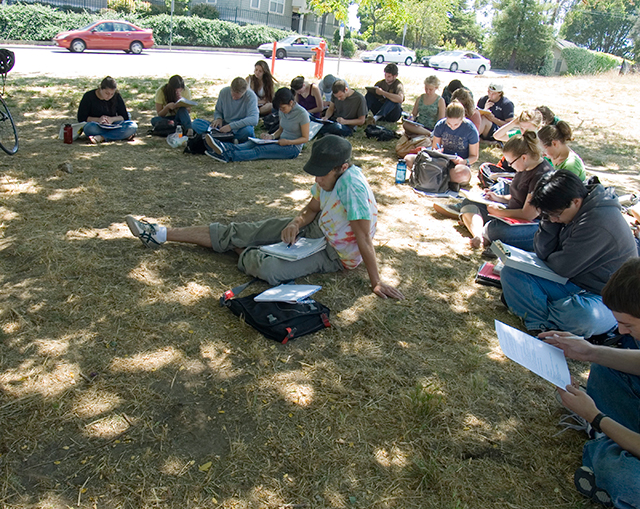 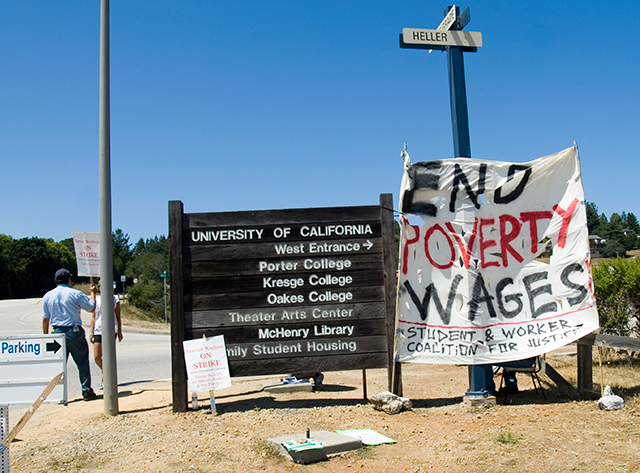 The West Entrance is one of two entrances to UCSC.
§SWCJ Orientation
by ~Bradley Thursday Jul 17th, 2008 9:11 PM 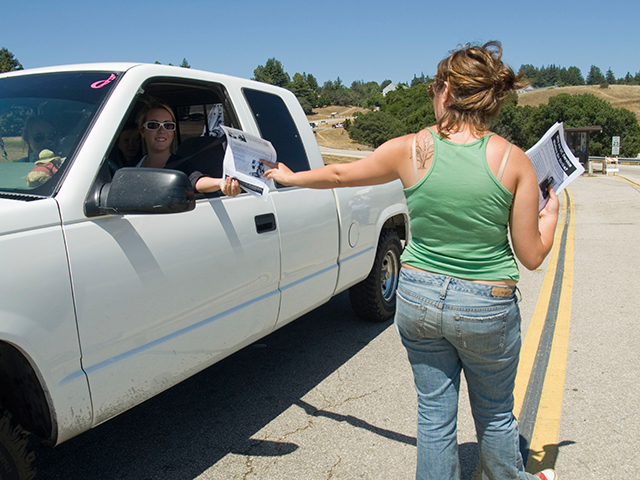 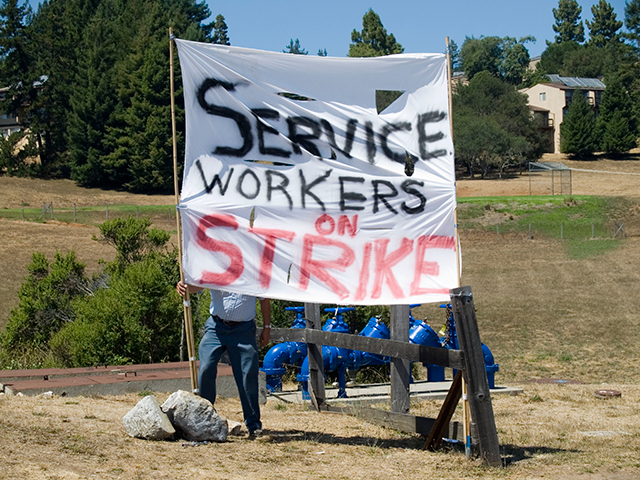 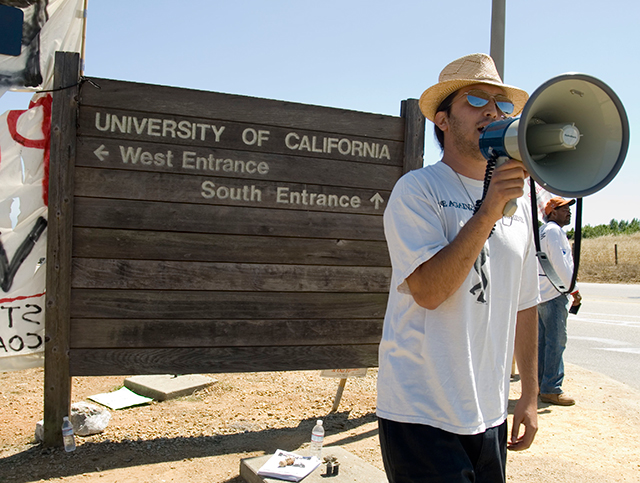 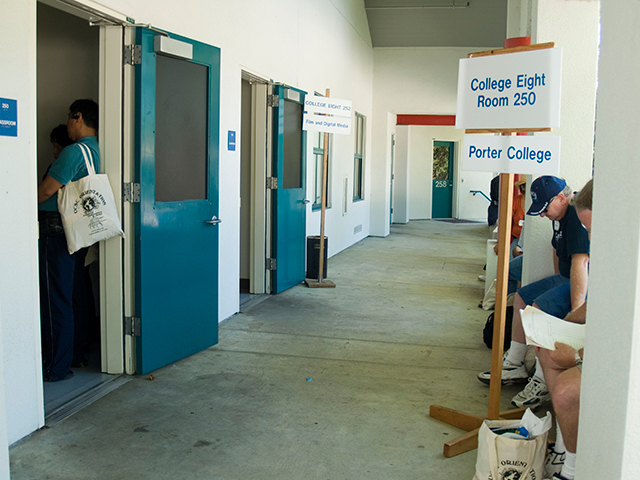 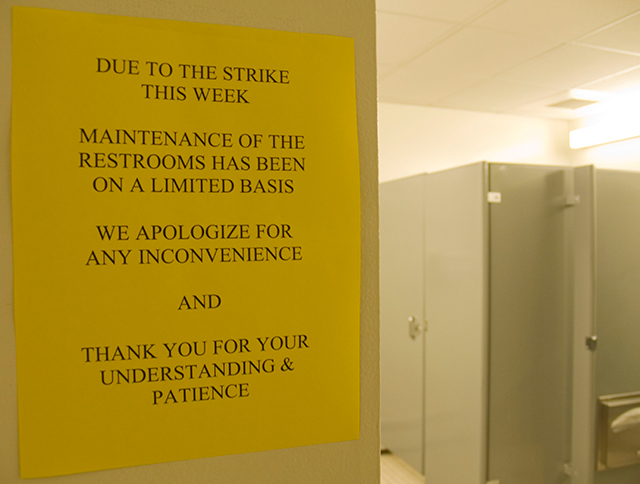 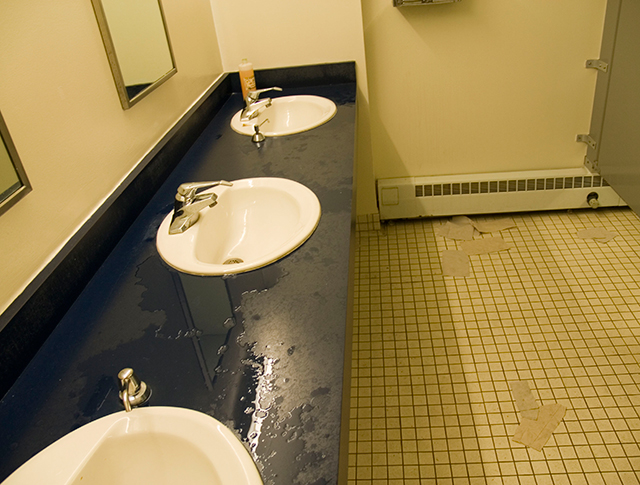 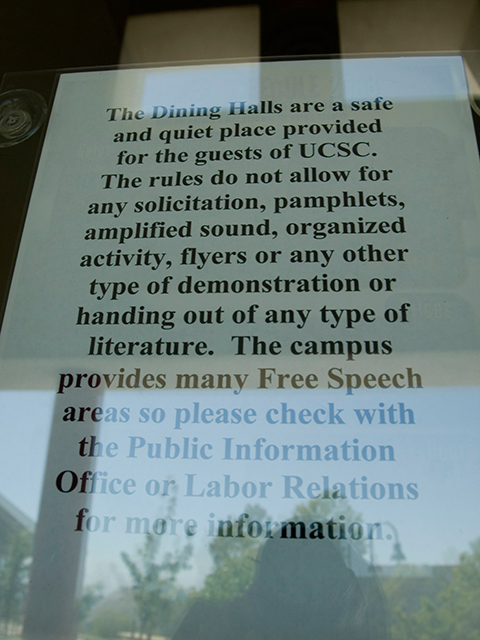 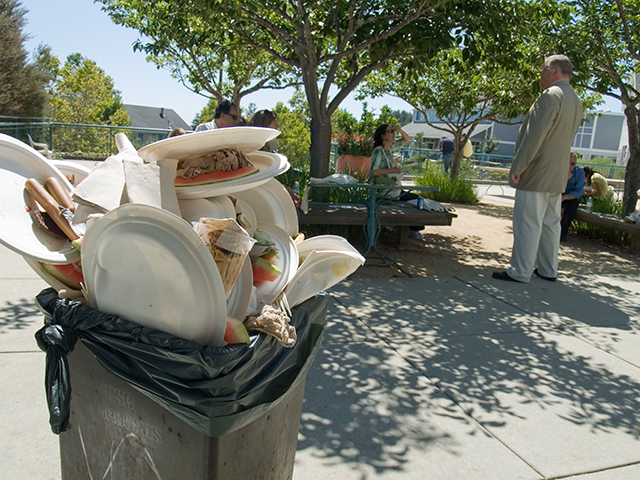 Adam Snook, Coordinator for the Community Safety Officer and Emergency Preparedness Programs, talks about health and safety at UCSC while standing by an overflowing trash can.
§Recycle Bins Are Full
by ~Bradley Thursday Jul 17th, 2008 9:11 PM 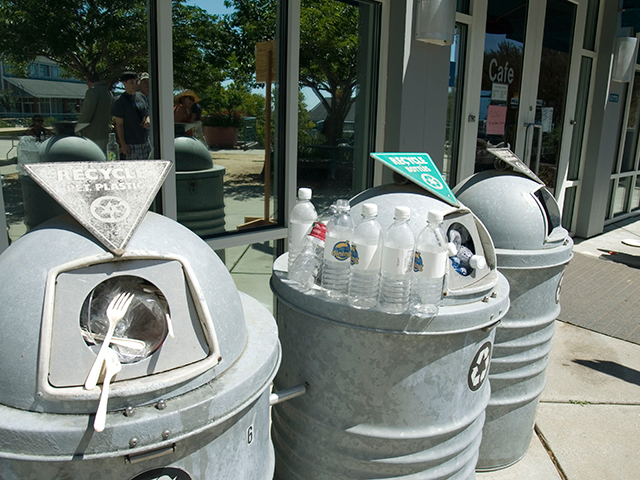 What about reuse and reduce?
The EPA breaks it down like this:
Reduce, Reuse, and Recycle
Produce Less Waste by Practicing the 3 Rs:
* Reduce the amount and toxicity of trash you discard.
* Reuse containers and products; repair what is broken or give it to someone who can repair it.
* Recycle as much as possible, which includes buying products with recycled content.
http://www.epa.gov/msw/reduce.htm

Corporations are to blame. Please check out "The Story of Stuff" at:
http://www.storyofstuff.com 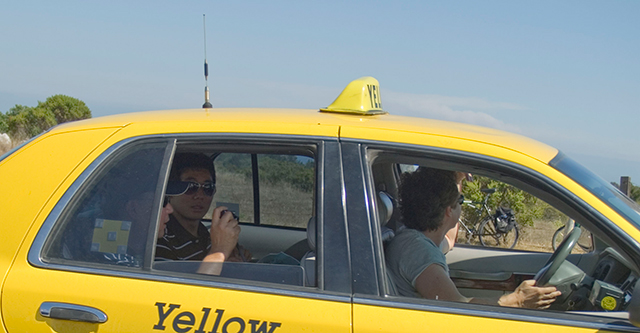 Taxis are not seen very often since county buses and UCSC shuttles normally provide service around campus. However, the UC shuttle drivers are on strike and the county bus drivers are respecting the picket line.
§Strike Picket
by ~Bradley Thursday Jul 17th, 2008 9:11 PM 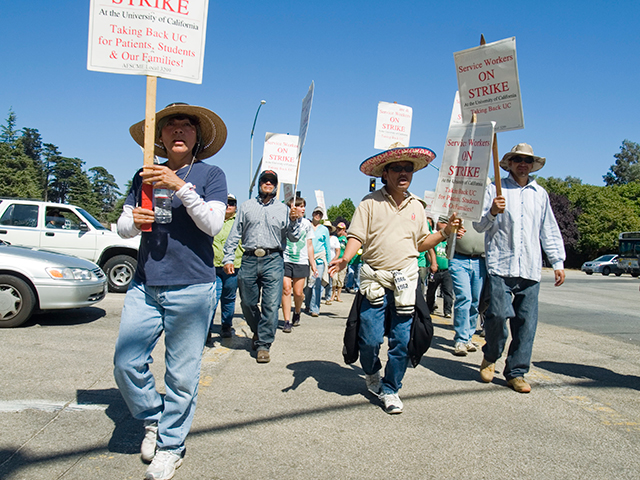 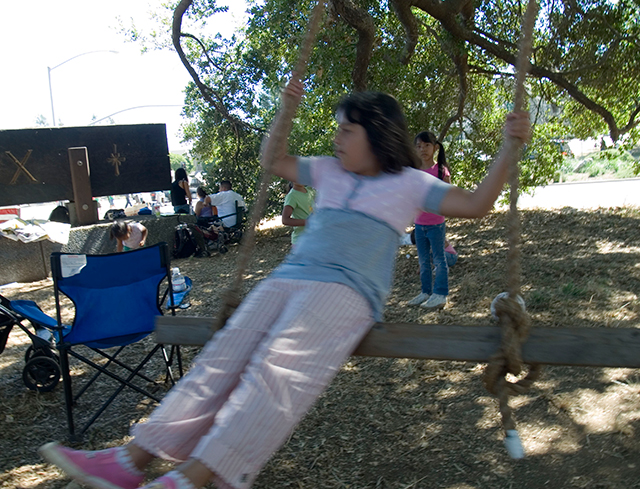 Children explore the ground, kick around a soccer ball and swing from an old Oak Tree at the base of campus.
Add Your Comments


Unless you're referring the dinner that the Chancellor hosted to raise money for UCSC student scholarships? That one allowed people to pay as much as they wanted, and some generous donors did make contributions that would have worked out to $1,000. But that was voluntary, and well above required costs. And that dinner raised tens of thousands of dollars that went directly to student scholarships, so lambasting him for that is pretty weak.

What dinner are you talking about Bradley?
Add a Comment
§June 5th at the Cocoanut Grove
by ~Bradley
(bradley [at] riseup.net) Friday Jul 18th, 2008 11:13 AM 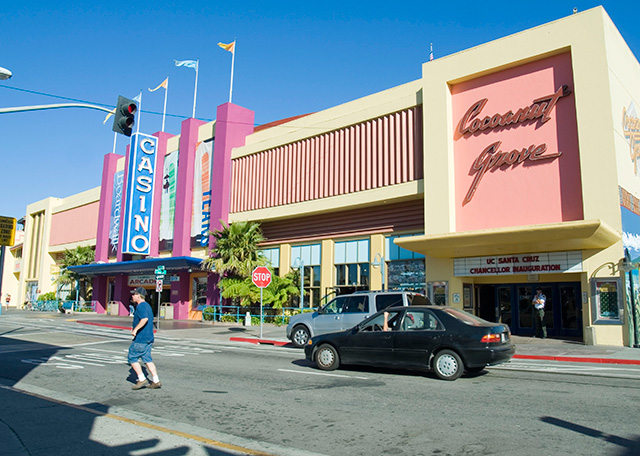 Reply to comment above by "Didnt happen"
First you say "No such event ever happened." and then you explain "that dinner raised tens of thousands of dollars that went directly to student scholarships."

The cozy gathering, not limited to UC Regents and executives, did allow some $500 a plate 'cheapskates' past the layers of security. Thanks for keeping me in check on that one.
Add a Comment
§Inaugural Dinner
by ~Bradley
Friday Jul 18th, 2008 11:22 AM 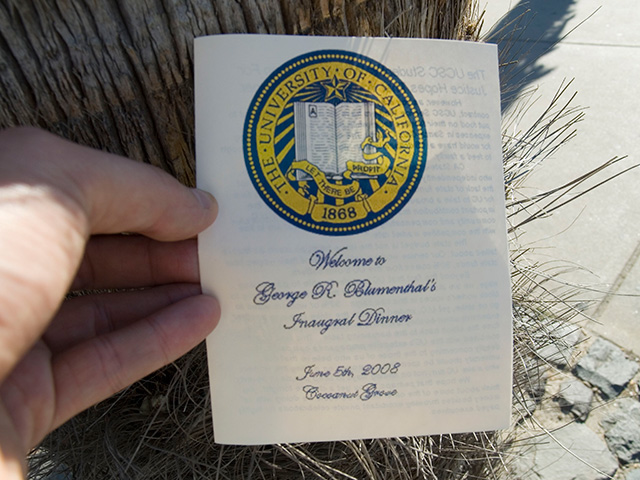 The Student and Worker Coalition for Justice handed out programs to donors as they were arriving at the Cocoanut Grove on June 5th for Chancellor George Bluementhal's Inaugural Dinner.
Add a Comment
§Program
by ~Bradley
Friday Jul 18th, 2008 11:23 AM 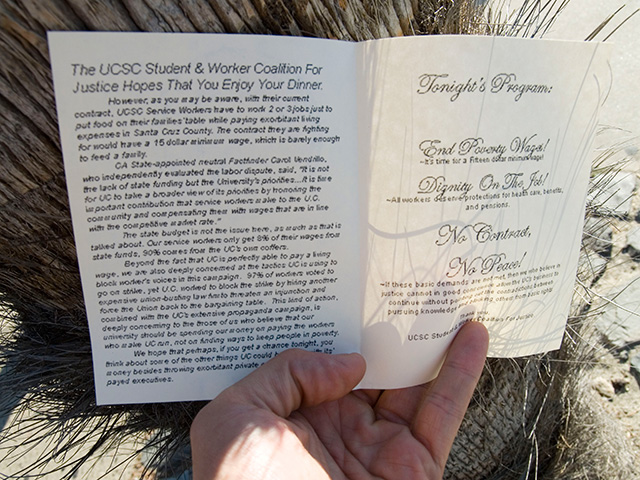 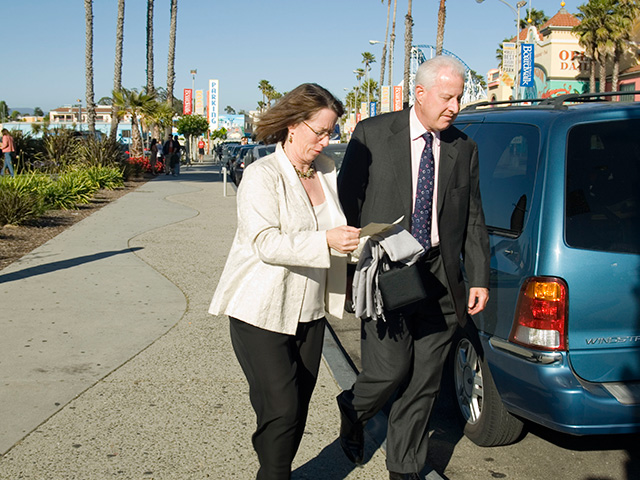 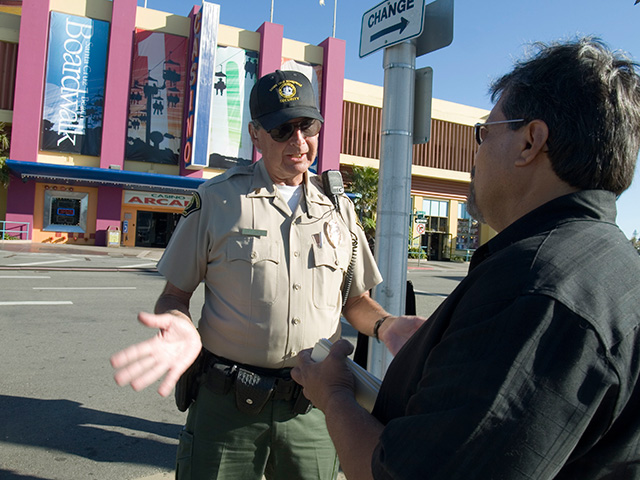 June 5th at the Cocoanut Grove
This kind gentlemen explains to Ernie, a cook at College 9 and 10, that free speech is not permitted at the Boardwalk.
Add a Comment
§John Laird
by ~Bradley
Friday Jul 18th, 2008 11:29 AM 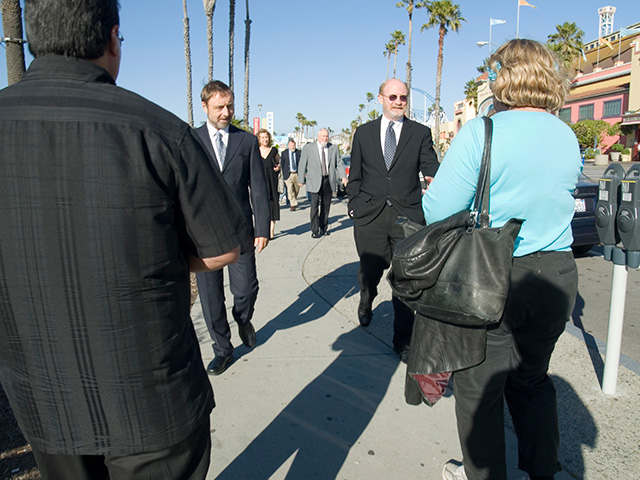 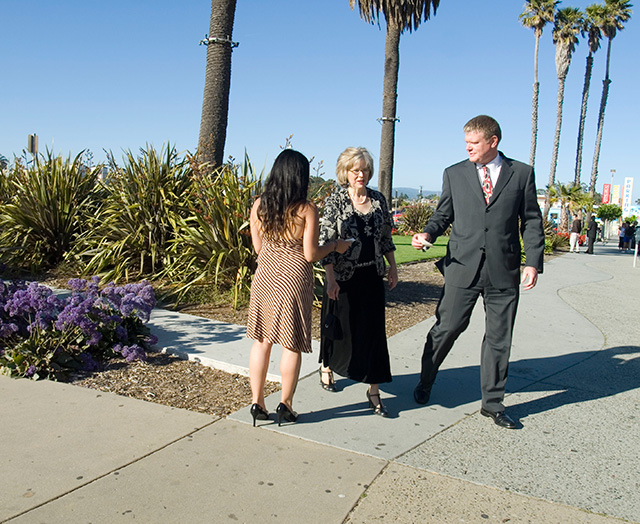 A student gives a program to a guest arriving at the Cocoanut Grove on June 5th for Chancellor George Bluementhal's Inaugural Dinner.
Add a Comment
§Wrong. Check your facts Bradley
by Free of charge event
Friday Jul 18th, 2008 12:04 PM
None of the guests at the Cocoanut Grove dinner held in recognition of Chancellor Blumenthal's Inauguration paid a dime to attend. It was invitation only, for friends and supporters of the UC system, but there was no admissions charge.

Please reference any credible source you have to confirm your assertion, or consider admitting that you've made a mistake in this case...because you have.

The single two costliest-to-attendee events that UCSC hosts each year are the Scholarship Benefits Dinner, and the Long Marine Labs "Whale of an Auction" dinner. Both use the proceeds to fund student scholarships and programs for students. Check your facts.
Add a Comment
§Free Fundraiser
by ~Bradley
Friday Jul 18th, 2008 12:26 PM
Hi, thanks for kindly participating in Indymedia! Your corrections and additional information is appreciated. I should have been more careful and called the event a fundraiser. I believe you when you say there was no admissions charge. Can you let us know how the guest list was decided? The UC system has so many friends and supporters that they could not reasonably fit into the Cocoanut Grove.

The fund raising dinners do charge an attendance fee, and they raise money. Neither comes close to $1,000 per plate. A search of the UCSC website shows them costing $200 and $75 respectively.

The dinner at the Grove didn't charge any attendance fee, and didn't raise any money.

I'm not trying to rattle your chain here; I'm trying to point out that you either have incorrect information, or you've confused two disparate functions.
Add a Comment
§Thanks
by ~Bradley
Friday Jul 18th, 2008 1:40 PM
I see how I got confused by the first comment. Come on, tell us, what was the process for sending someone an invitation to Chancellor George Bluementhal's Inaugural Dinner on June 5th at the Cocoanut Grove?
Add a Comment
§Bradley - read more closely
by dano
(danony [at] gmail.com) Saturday Jul 19th, 2008 9:03 AM
In keeping with the spirit of IMC, you've really got to start reading more closely. Like almost all universities, UCSC holds events like dinners to raise capital for programs and scholarships for students.

Bluementhal's Inaugural Dinner was to celebrate his new appointment as Chancellor. The fact that you didn't receive an invite would most likely be that you've never donated time, money or anything to UCSC to help student or programs.

Have you ever volunteered to help UCSC? Have you ever donated even $50.00 to go to a scholarship or give a gift-in-kind (e.g., buy a book for the Library)? There's a start for your quest to get an invite.

Best of luck!
Add a Comment
§Another way to get on the invite list...
by Just saying yo
Saturday Jul 19th, 2008 11:43 AM
Bradley might also want to consider not interrupting the alumni luncheon with his compadres next year.

Maybe it's just me, but I'd probably be less inclined to invite him to dinner after he jumped on stage and disturbed my lunch the month before.
Add a Comment
Support Independent Media
We are 100% volunteer and depend on your participation to sustain our efforts!