by Rebecca Ruiz-Lichter and RM Arrieta. (rebecca415 [at] gmail.com)
Bayview residents and supporters accuse the San Francisco Department of Public Health of turning a blind eye to Lennar Corp's toxic construction in the Hunter's Point Shipyard.

Bayview community members said Lennar Corp, a housing redevelopment corporation based out of Miami, has been digging into asbestos-rich serpentine rock sending plumes of cancer-causing dust into nearby homes, recreation centers and elementary schools.

California state law requires Lennar to monitor the toxicity of the air and inform residents when asbestos or other carcinogens reach a poisonous level. However, May 30, when asbestos meters sky-rocketed to 138,000 levels of particulate matter, community members were kept in the dark. Bayview advocates say the release far exceeded levels deemed lethal, even by the city's lenient standards –the Environmental Protection Agency reports that there is no safe level of asbestos exposure.

Bayview residents were not informed of the exceedence until more than six weeks later on July 14.

The toxic reading came just days before the June 3 election, when a heated battle was taking place over Prop F, a grassroots proposition that would have forced Lennar to create affordable housing; and Prop G, an initiative that would grant Lennar permission to proceed with the construction of 10,000 condominiums on the Shipyard, a Superfund site.

"Such an overage should have triggered a complete removal of those most sensitive receptors which would have been our children..." noted Bayview resident Marie Harrison of Green Action, an environmental justice organization, as she addressed the commissioners.

Minister Christopher Mohammad of the Nation of Islam, spoke ardently about the environmental racism and classism the Dept. of Public Health conveys when it chooses to "stand by and ignore the health of Black, Latino, Pacific Islander and poor white people.”

Octavio Solorzano, a 18-year-old resident of Bayview Hunter's Point, spoke about the serious health problems he has endured from breathing in the toxic dust. Solorano tested positive for asbestos and mercury in his blood last year after his GPA fell from a 4.0 to a 1.87 during Lennar's construction.

Shockingly, some of the Public Health commissioners said they were not informed about the asbestos problem in Bayview and the controversy surrounding Lennar's construction. So much so, that they called on Dr. Mitchell Katz, DPH director, to prepare a presentation on Lennar's activities in the Shipyard at the next monthly commissioners meeting August 5.

“For the director [Katz] not to have debriefed the four new commissioners about the impact that the dust has had on the community reflects the lack of attention paid to the people of Bayview,” charged Minister Christopher Mohammad.

Activists with Bayview's Stop Lennar Action Movement (SLAM), a network of individuals, religious groups and social justice organizations, have been calling for the Dept. of Public Health to support a hearing on Lennar's environmental impact for almost two years but Katz claimed that asbestos levels in the Bayview were not as dangerous as it might appear, and that it is "normal" for a child to have nose bleeds and asthma.

According to information posted on the website of the state Environmental Protection Agency, "all types of asbestos are hazardous and may cause lung disease and cancer."

-To research the harmful affect of asbestos please visit: http://www.epa.gov/asbestos/

-To get involved or learn more about Lennar's actions in Hunters Point, Bayview community meetings are held Thursdays at 6:30 pm at Grace Tabernacle Community Church located at 1121 Oakdale Ave in San Francisco. 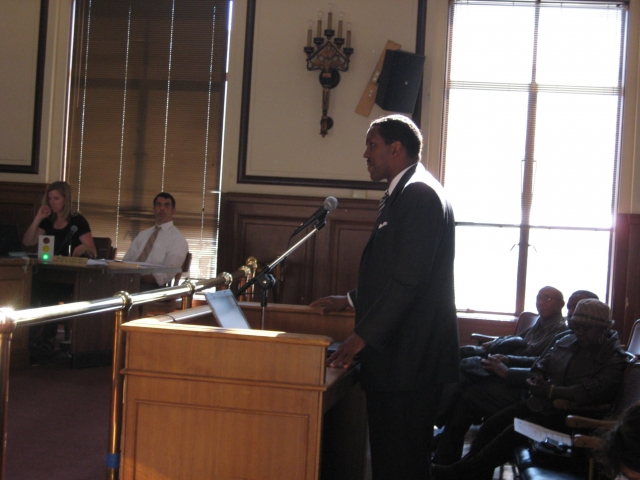 original image (2592x1944)
Minister Chrisopher Mohammad of the Nation of Islam argues that the Department of Public Health should call for a hearing on Lennar’s environmental impact in Hunter’s Point.
§pic3
by Rebecca Ruiz-Lichter and RM Arrieta. 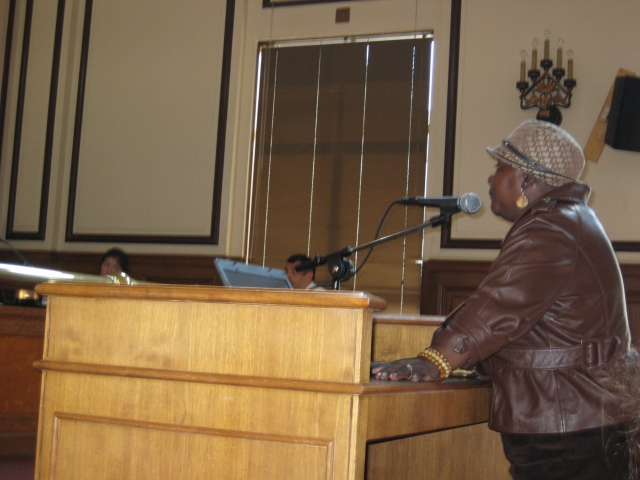 original image (2592x1944)
Marie Harrison of Green Action expresses her concern for the children and elderly that should have been warned about the high asbestos reading more than a month ago.
§
by Rebecca Ruiz-Lichter and RM Arrieta.

I apologize for the mistakes.