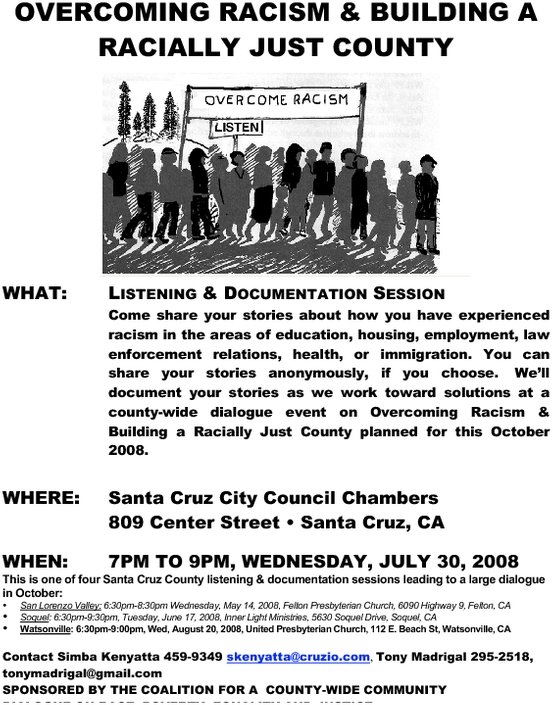 §Wed July 30 6:30-9:00 City Council Chambers
by fwd
Tuesday Jul 29th, 2008 6:52 PM
Superintendant of School, Michael Watson will be the key-note speaker at the third Santa Cruz County listening & documentation sessions to be held on Wednesday, July 30 from 7 PM to 9 PM at the Santa Cruz City Council Chambers, 809 Center St. The first events were held May 14 in Felton and the second held June 17 at the Inner Light Ministries where many community members attended. A number of Santa Cruz City Councilmen are planning to attend this “listening event” including former mayor Emily Reilly.

The community is asked to come to listen and also share their stories about how they have experienced racism and discrimination based on race or national origin in the areas of education, housing, employment, law enforcement relations, health or immigration. Stories can be shared anonymously if chosen . The stories will be documented to be discussed at a county -wide dialogue on Overcoming Racism and Building a Racially Just County planned for this October.

For information call Simba Kenyatta 459-9349 or Tony Madrigal 295-2518
Add a Comment
§Update Requested
by Robert Norse
Sunday Aug 3rd, 2008 5:15 AM
I've offered critical support for this "Community Dialogue" with the proviso that the dozen or so people working on it (including one sitting City Council member--Madrigal) and at least one City Council candidate (Kenyatta) actually make some solid proposals about combatting police abuse and take some action in individual cases that have already been aired.

I also question the decision not to broadcast the event on Community TV or replay it. Concerns about the anonymity of the speakers could be met by masking their faces in the broadcast or disguising their voices. This is really silly too, since the meetings are public meetings and the people giving their accounts are speaking publicly.

The problem I have, as I've repeatedly written, is that the whole thing smacks of being an election eve publicity stunt without really substance by Madrigal and Kenyatta.

How about summarizing the testimony of the last few forums--or at least the one mentioned here--for the benefit of those of us who couldn't attend the Wednesday "dialogue"?
Add a Comment
Support Independent Media
We are 100% volunteer and depend on your participation to sustain our efforts!