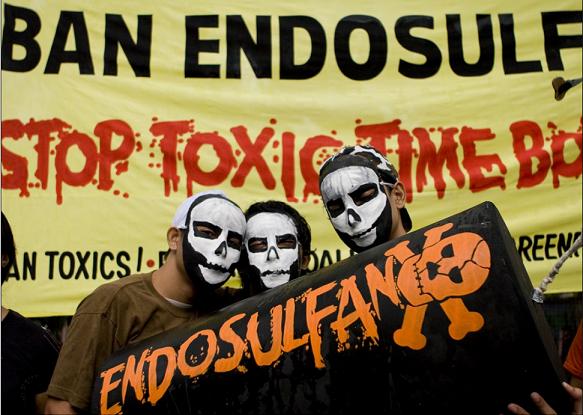 Quezon City. Over 50 citizens’ groups and coalitions working for public health, environmental justice and sustainable development joined forces to press for a total ban on endosulfan, stressing that its continued use is akin to a ticking “toxic time bomb.”

In a creative protest held outside the Fertilizer and Pesticide Authority (FPA) in Quezon City, the eco-activists disguised themselves as lethal monsters, donning toxic masks and carrying a huge mock bomb, representing endosulfan and the many grave threats it presents to the people and the environment.

The diverse civil society organizations spoke as one in urging the government to impose without delay and without exemption a complete ban for all uses of endosulfan, the dreaded toxic cargo of the ill-starred M.V. Princess of the Stars that capsized off Sibuyan Island in Romblon province.

“To reduce the unacceptable threat of endosulfan to human health, wildlife and the environment, we ask the government to ban endosulfan and revoke all exemptions without delay,” Dr. Romy Quijano of the Pesticide Action Network-Philippines and the International POPs Elimination Network said.

PAN and IPEN, along with other groups, have long been campaigning for a global ban on endosulfan.

“We also urge the government and the industry to switch to ecological, non-chemical pest control practices in agriculture for the health and safety of our farmers, workers, consumers and the whole environment,” Eileen Sison of the EcoWaste Coalition’s Task Force Organic Farming added.

The Manila-based groups were joined by a representative of the Sibuyan Island Sentinels League for Environment, Inc. (Sibuyan ISLE), the lone environmental group in the area, in calling for decisive steps versus possible chemical devastation of the famed Sibuyan Island.

“The possible contamination of Sibuyan Island and its marine environment with endosulfan, tamaron and other chemical cargoes, and bunker fuel from the sunken vessel is already affecting the life and livelihood of our people who depend mainly on the abundance of the sea,” Rodne Galicha of Sibuyan ISLE lamented.

Sibuyan ISLE urges all the parties involved, including the national government, Sulpicio Lines, Del Monte Philippines, Inc. and Bayer Crop Science, among others, to pursue quick and efficient strategies and mechanisms to protect the people, prevent marine pollution and preserve the rich biodiversity and abundance of the Sibuyan Sea.

The various groups also raised the need for the authorities to institute a community health and environment monitoring program in places exposed to endosulfan, a synthetic organochlorine pesticide, to find out the extent of potential contamination and to come up with an action plan.

Endosulfan was banned by the FPA in 1993, but exemptions to the ban were granted in 1995 to pineapple industry giants Del Monte and Dole to kill the mites that cause the so-called “pink disease” in pineapple plants.

Del Monte and Dole were given “institutional exemption,” allowing them to use the highly toxic pesticide despite local and global concern against its use.

Extensive studies confirm that endosulfan bioaccumulates in living things, is extremely toxic to almost all kinds of organisms, is very persistent in the environment and is transported long distances, far from its source. These characteristics make endosulfan a notorious global pollutant that has to be eradicated straight away.

Reports further show that endosulfan poisoning has been linked to reproductive and birth abnormalities, congenital physical disorders, mental retardation, neurological problems, cancer and death among agricultural workers and villagers in developing countries in Africa, Asia and Latin America. Endosulfan, a nerve poison, causes neurotoxicity and can damage the immune system.

Because of its toxicity and persistence in humans, wildlife and the environment, many countries, including the members of the European Union (EU), have outlawed the production, sale and use of endosulfan. In 2007, the EU nominated endosulfan for a global ban under the Stockholm Convention on Persistent Organic Pollutants (POPs), which the Senate of the Philippines ratified in 2004.

http://ecowastecoalition.blogspot.com
Add Your Comments
LATEST COMMENTS ABOUT THIS ARTICLE
Listed below are the latest comments about this post.
These comments are submitted anonymously by website visitors.