Add an Event
Newswire
Calendar
Features
Home
Donate
From the Open-Publishing Calendar
From the Open-Publishing Newswire
Indybay Feature
Publish to Newswire
Add an Event
Related Categories: U.S. | Government & Elections | Police State & Prisons
Be Prepared for Police Violence at the RNC Protest
by Ray Louis
Friday Jul 11th, 2008 5:53 AM
A few weeks ago I wrote a piece entitled "Thoughts on the Upcoming RNC Protests" which (as of writing this) still ranks fairly high in the Google News search results for "RNC Protests". In that article I provided a history of past convention protests, reasons why people will be protesting this convention, and I gave some tips on how to prepare for it if you plan on attending. This current essay is in response to some of the few critiques of that piece which appeared around the web. 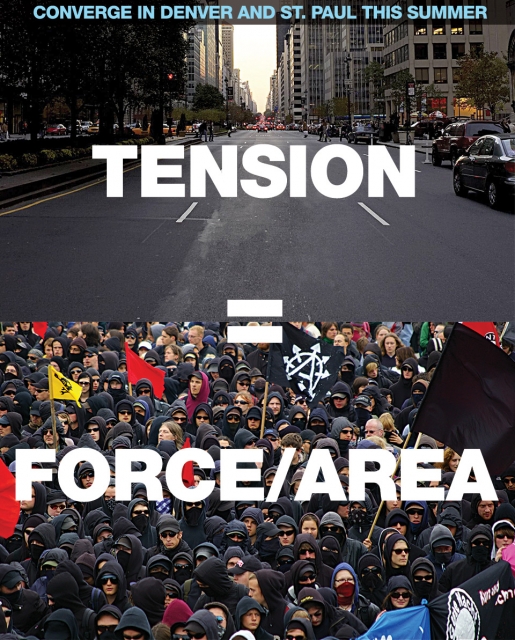 original image (960x1193)
A few weeks ago I wrote a piece entitled "Thoughts on the Upcoming RNC Protests" which (as of writing this) still ranks fairly high in the Google News search results for "RNC Protests". In that article I provided a history of past convention protests, reasons why people will be protesting this convention, and I gave some tips on how to prepare for it if you plan on attending. This current essay is in response to some of the few critiques of that piece which appeared around the web.

The main thrust of the criticism was directed at this paragraph (which was taken largely out of context):

"The anger and the ferocity of the protesters will vary, but I ask you to consider who your real allies are and who the actual enemy is. While some will stay on the parade routes, some will not. Still others might lock-down to block delegates or to draw more attention to the protest. And lastly, still others might even vandalize corporate property. And concerning this last group I ask you to consider this... the bank whose window they smash (or spraypaint) may have foreclosed on their family's home, pulled an Enron on their life savings, or maybe that corporation simply supported the war machine and deforestation. Vandalism is not violence, causing bankruptcy or starvation or war actually is. It is a betrayal of the protest to assist the police in catching petty vandals (who may be morally justified in their actions)."

I stand by this statement. What most of the critics did not seem to grasp was the fact that people ARE angry, and some WILL be surly and aggressive, but that should not give the police carte blanche to engage in their typically heavy handed tactics with the larger protest body. The police should also be restrained in dealing with those who are aggressively standing up for life, liberty, and the pursuit of happiness -- even if those people engage in minor property destruction or violence. The point is... the police are supposed to be trained for discipline and fairly restrained but, in actuality, they very rarely are restrained at these protests.

Even when the protesters are of the tamest variety, the police use violence (from tear gas and pepper-spray to clubs and rubber bullets). One critic suggested that the protesters should give the police "no reason to use violence." But the fact of the matter is, throughout history, non-violent civil disobedience has often been met by the state with brute force. Totally uninvolved people (who weren't even protesting) have been brutalized by the police (and not necessarily even during protests). Police forces are trained for violence, carry weaponry every day, and are often comprised of people who have violent and aggressive temperaments. Ignore this reality at your own peril, but please do not blame the victims of police brutality (which is a very real phenomenon).


In preparation for this upcoming protest at the RNC in St. Paul (Sept. 1, 2008), the mainstream media is already skewing the reality of violence at past protests. The protest at the DNC convention in '68 was A POLICE RIOT. The WTO Ministerial Conference in Seattle '99 also was classified (by the state itself) as A POLICE RIOT and the Seattle police chief was forced to resign shortly after the events surrounding that event. Similar events took place in Miami at the FTAA protest in 2003. These are just a few examples from recent history, but the list could go on and on.


Now the state and their corporate media tools are preemptively raising the spectre of terrorism and invoking the unprecedented likelihood of a WMD attack or some other horrific event (and equating these things with a riot [as if the police have not been the primary participants of past riots]). The reality is that they are conditioning the public while preparing to use typically excessive force in their efforts to escort wealthy Republican warmongers past the generally non-violent protesters.

But my intention is obviously not to condemn those protesters who have potentially had their lives ruined by the system and who are now prepared to take to the streets as they attempt to hold their ground against the corporate police state. The police are going to abuse them whether they peaceably assemble or not and the system is going to continue raking them over the coals whether they protest or not. It is therefore my belief that some righteous indignation (and justifiable anger) will not only be good for this protest (which is preparing to use a blockade strategy to prevent Republicans from celebrating and promoting their policies of war, imperialism, and the destruction of human rights and liberties) but it's also inevitable -- people will violently resist when their lives are being threatened and their world is being destroyed. When people have their life, liberty, and basic needs stripped from them, true justice requires taking a firm stand in self defense (for the sake of dignity itself and to prevent further abuses). I'm NOT saying that I want these protests to be violent, I'm merely saying that people have not completely had their spirits crushed in this country and they have not yet been genetically engineered with sheep genes.

The debate about violence can continue elsewhere -- (is it ever justified and, if so, when?) -- but I'm merely reminding people that it is the state which institutes violence at every level of it's existence and mild retaliation or self-defense against it should not surprise anyone. Furthermore, supposed non-violent protesters or activists should not try to justify the state's violence or help the state apprehend anyone who is engaging in questionable activity. It's one thing to claim non-violence as a principle, but as soon as you assist the violent police state you give up any legitimate right to that claim. The police at the RNC will be defending veritable war criminals and they should not have free reign to brutally beat down those who oppose such villainy.

Concerning corporate property damage... throwing a brick through the window of some war-profiteering corporation is nothing compared to the violence the state would issue to someone who engages in such an act -- and that is precisely the problem. Violence against property & profit is put on the same level as violence against people -- and the former is arguably not violence AT ALL! Smashing a bottle in the street (even if it belongs to someone else), for instance, is not violent -- neither the bottle nor the asphalt is alive and they no feel pain -- but violently beating or imprisoning someone for making such a mess... that IS violent because people are actually alive and do feel pain. The same holds true if we are talking about a McDonald's sign or bank's window. Even if you agree with their corporate practices, symbolic property destruction IS NOT violence. Turning people in to the police for doing such things however... now we are starting to talk about violence towards actual living people.

So many protesters are planning to show up at the RNC protests prepared to defend themselves with body armor and gas masks, and I can't blame them. The economy is being laid to waste along with the environment. More people are imprisoned in total numbers, and per capita, here in the U$A than in any other country. The war is increasing the chances for terrorism -- by both fundamentalist abroad and from the psychologically scarred soldiers who are returning from the Iraq war. We need to muster some real resistance to this and not condemn those who are ready to fight for life and freedom.

The Republicans who are attending the RNC to celebrate and promote their destructive policies are not your allies -- and neither are the police who will use brute force to clear the path for them. Be prepared for police brutality and be prepared to defend yourselves and others. Taking a stand against these forces could prove to be a turning point in American history.
http://www.buzzflash.net/story.php?id=59126
Add Your Comments
LATEST COMMENTS ABOUT THIS ARTICLE
Listed below are the latest comments about this post.
These comments are submitted anonymously by website visitors.