Add an Event
Newswire
Calendar
Features
Home
Donate
From the Open-Publishing Calendar
From the Open-Publishing Newswire
Indybay Feature
Publish to Newswire
Add an Event
Related Categories: International | San Francisco | U.S. | Anti-War
Canada Court Decision Favors US War Resister
by R. Robertson
Saturday Jul 5th, 2008 10:45 PM
On July 4 peace and humanitarian organizations celebrated a federal court decision favoring Iraq war resister Joshua Key that could have substantial implications for other American war objectors as well. On July 9 demonstrators across the US will call on Canada's Prime Minister and Minister of Immigration to implement an historic parliamentary motion passed on June 3 that called for an end to deportation orders against US War resisters.
Photo: Members of Courage to Resist and the Raging Grannies at January 2008 demonstration in front of Canadian Consulate in San Francisco. 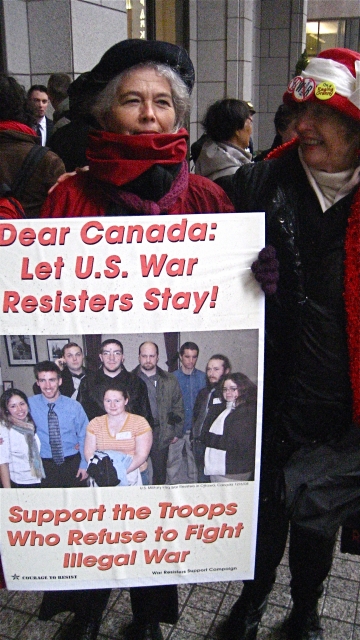 original image (1584x2816)
Joshua Key served eight months in Iraq until he could no longer face the atrocities he witnessed on a daily basis. He went AWOL to escape the horrors of the war and was eventually reunited his wife and four young children.

The family arrived in Toronto in March of 2005. Although the Canadian people are largely in support of welcoming American war resisters, the Key family has nevertheless faced legal problems under Canada's current conservative government.

On July 4 peace and humanitarian organizations celebrated a federal court decision favoring Key that could have substantial implications for other American war resisters as well. The court found that he was required to systematically violate the Geneva Conventions as part of his military service in Iraq and that any punishment he might receive if deported to the US would constitute persecution.

A spokesperson for the War Resisters Support Campaign called the decision "wonderful news for Josh and his family and one that gives hope to Corey Glass and the other US War resisters who are currently subject to deportation by the Canadian government." Glass, formerly of the Indiana National Guard, is scheduled to be deported from Canada on July 10th.

In San Francisco and New York City, chapters of the Raging Grannies, an organization founded in Victoria, British Columbia, will sing songs including this one to the tune of "Battle Hymn of the Republic".

The Grannies span the border and we work in unity
With our Canadian sisters we want conscience to be free
Resisters from an evil war should live in liberty
Help war resisters now!

In San Francisco demonstrators will gather on July 9 from noon to one pm at 580 California St. (near Montgomery)

For details on vigils as the list is updated visit:

http://www.couragetoresist.org/x/
http://www.resisters.ca
Add Your Comments
Support Independent Media
We are 100% volunteer and depend on your participation to sustain our efforts!