Add an Event
Newswire
Calendar
Features
Home
Donate
From the Open-Publishing Calendar
From the Open-Publishing Newswire
Indybay Feature
Publish to Newswire
Add an Event
Related Categories: International | Global Justice & Anti-Capitalism
Scientology "Study Tech": Start the brainwashing early
by Dr. Lilly von Marcab
Thursday Jul 3rd, 2008 10:55 PM
The entertainment newswires have been buzzing recently with a story that is actually of some social significance. Hollywood movie star Will Smith is founding an elite new private school in the Los Angeles suburbs, to be called the New Village Academy (NVA).Among several other teaching methods, NVA will emphasize something called "Study Tech," a mode of instruction developed by L. Ron Hubbard, founder of the Scientology cult. Study Tech is nothing less than a way to make children think like Scientologists. 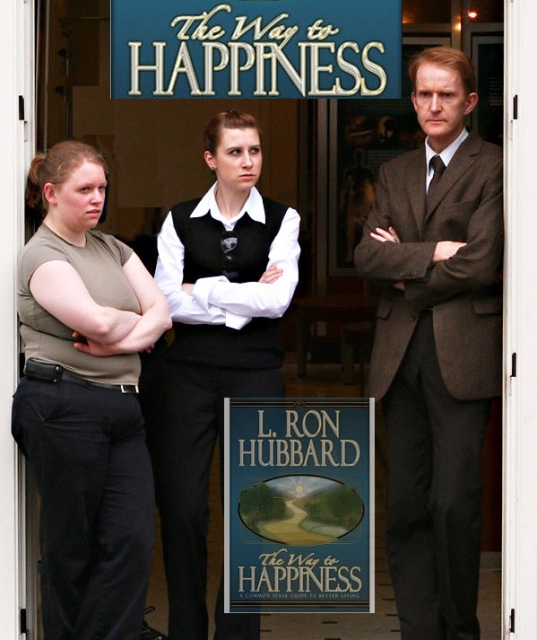 original image (599x713)
Scientology tries to give the impression that Study Tech is simply a hands-on, engaging way to inspire young minds. Also, of course, they insist that it is entirely "secular," not related to Scientology teachings, etc. etc. etc. People who don't know any better accept their assurances uncritically. The reality of Study Tech, however, is much more disturbing. There is a reason that Study Tech methodology and materials are used in no other schools than the Scientology schools managed by "Applied Scholastics," one of the cult's many front groups. The reason is that it has been rejected as "deceptive" and "garbage" by nearly every Board of Education in the United States and Canada.

David Touretzky, PhD, is Professor of Computer Science at Carnegie Mellon University in Pittsburgh, USA. He is a long-time critic of the Scientology cult, and in 2003 wrote an exceptionally useful essay about Study Tech: "The Hidden Message in L. Ron Hubbard's "Study Tech." Touretzky's analysis explains not only the hidden Scientology doctrine within Study Tech, but also addresses the question of whether or not it is effective. (SPOILER: It's not effective.) Touretzky says that Study Tech "was designed for indoctrination, not education. While it may be good at producing obedient Scientologists, it is completely at odds with promoting the ability to think independently. It quite deliberately aims to reduce a student's ability to think critically. Students are taught to distrust their own intelligence and background knowledge, passively and uncritically accepting whatever they are being told."

Study Tech is founded on three principles. "Mass," "Gradients," and "Misunderstoods." All three terms are very significant in the Scientology cult. Touretzky cites the Study Tech materials in their claim that ONLY pictures can provide the "mass" required to understand a concept.

"If you are studying about tractors, words on a page or someone telling you about tractors is no substitute for having an actual tractor there. Photographs or motion pictures are helpful because they at least give the hope of the mass of a tractor."

'But reading books or listening to someone talk does not give you mass."

Such an absence of mass can actually make a student feel squashed. It can make him feel bent, sort of spinny, sort of dead, bored, and exasperated.

Scientology teachers are quick to declare that a bored or exasperated student may have learning difficulties.

With regard to "Gradient," a definition comes from Scientology's official glossary:

"Gradient: a gradual approach to something, taken step by step, level by level, each step or level being, of itself, easily surmountable -- so that, finally, quite complicated and difficult activities or high states of being can be achieved with relative ease. This principle is applied to both Scientology processing and training."

The very same definition is given in the Study Tech glossary, only omitting the final sentence. Touretzky explains how Scientology "turns this sensible advice into rigid dogma, with a warning that violations can have unpleasant consequences."

For example, one finds a cartoon with a picture of a boy who skipped a step in building a dog-house, and now he is seeing stars and feeling woozy. "If you have skipped a gradient you may feel a sort of confusion or reeling" (Learning How to Learn, p. 84.)

Touretzky notes: "Within Scientology, the gradient doctrine is an important tool for controlling the flow of information. It discourages beginning students from looking too closely into Scientology's claims. Students are told to accept things on trust and to wait until they are deemed ready for the facts. This is the bait used to attract many a new member."

On the principle of "Misunderstoods," I will cite Touretzky at length:

The third principle of Study Tech centers on the concept of misunderstood words. They're called "misunderstoods" in the books, and abbreviated as M/U or Mis-U in Scientology. Misunderstoods can be "cleared" by looking up the word in a dictionary. This is fine as far as it goes; students should certainly learn to use a dictionary. But according to Hubbard, misunderstood words are not a minor problem; they are in fact "the most important barrier to study" (Learning How to Learn, p. 101; Basic Study Manual, p. 49), and "the only reason a person would stop studying or get confused or not be able to learn" (Learning How to Learn, p. 114; Basic Study Manual, preface). In fact, "THE ONLY REASON A PERSON GIVES UP A STUDY OR BECOMES CONFUSED OR UNABLE TO LEARN IS BECAUSE HE HAS GONE PAST A WORD THAT WAS NOT UNDERSTOOD" (How to Use a Dictionary, p. 282; capitalization as in the original.) This sentence also appears in the frontmatter of all Scientology religious volumes.

This emphasis on the misunderstood word, in isolation, turns common sense into irrational dogma. Students are told explicitly that when they have a problem with understanding, "It's not a misunderstood phrase or idea or concept, but a misunderstood WORD" (Basic Study Manual, p. 153, emphasis as in the original.)

The Study Tech materials claim that a single misunderstood word can cause a student to completely forget everything read so far, or make them want to stop learning. Among other bizarre notions, it can also cause "a sort of nervous hysteria."

Touretzky points out that "Study Tech is also an effective method of social control in the classroom. If one expresses disagreement with the material one is studying in Scientology, that's taken as evidence of a misunderstood word. And each M/U must be located and cleared before moving on to other material… All disagreement is dismissed as misunderstanding -- a dangerous attitude for an educational system to promote."

Touretzsky's incisive analysis of Study Tech cannot well be summarized in the brief context of this article. I really recommend that you read it yourself. I will finish with some assessments of Study Tech by genuine authorities in the field of education (i.e. not Scientology shills), quoted by several journalists, and cited by Touretzky.

"In my opinion, they are involved in the worst kind of deception. They make grandiose claims about the effectiveness of their methods and materials ... with data that has never been published in a legitimate educational research journal." Scot Danforth, who oversees teacher education for the University of Missouri at St. Louis.

They "violate everything we know about how children learn, and appropriate pedagogy. In short, these books should be carefully placed in the cylindrical file." Johanna Lemlech, Professor of Education at the University of Southern California.

"In many cases, lack of comprehension is not because of a misunderstood word," says Sidnie Myrick, who leads a UCLA research group on early literacy, teaches a master's course in reading at Cal State L.A., and also teaches a class of first, second and third graders at Thomas Edison Elementary School in Glendale (she was Glendale's 1993 Teacher of the Year). "In fact," she says, "in many cases the student won't get the meaning until the material is presented in a completely different way."

Myrick also finds the books' illustrations "cutesy and condescending," the explanations "stilted and manufactured," and study technology, all in all, "woefully inadequate."

One member of the Los Angeles school board is unimpressed. A former high school history teacher, David Tokofsky calls the books "remedial" and says they would be of little use to any but the lowest-performing students. "If you walked into an eighth-grade class and tried to use these books on kids who are at the proper level, you'd kill them," says Tokofsky, who coached the Marshall High School Academic Decathlon team to a national championship in 1987. "They're not even good comic books."

"The reading process is so complex," she said. The principles in Hubbard's three barriers to learning focus primarily on reading at the word level.

"For older readers, we sometimes say, 'Skip a word you don't understand and try to gain comprehension from the whole context,'" she said. "We don't say that for young readers. But for older readers, it is extremely cumbersome to try to attend to every word."

"There isn't anything new. It's also sort of sketchy. What we know about teaching comprehension skills and study skills is a little more complex."

Purcell-Gates says the program's emphasis on use of the dictionary "is probably not the most effective tool for learning word meanings, because dictionary definitions tend to be very decontextualized. Teachers wouldn't use that as a primary vehicle for teaching vocabulary."

Help us make the Scientology cult and criminal organization accountable for its many crimes, ranging from an internal corrections gulag, to coerced abortions, to stalking and harassment, to toxic waste dumping, and many more things that will astonish you. 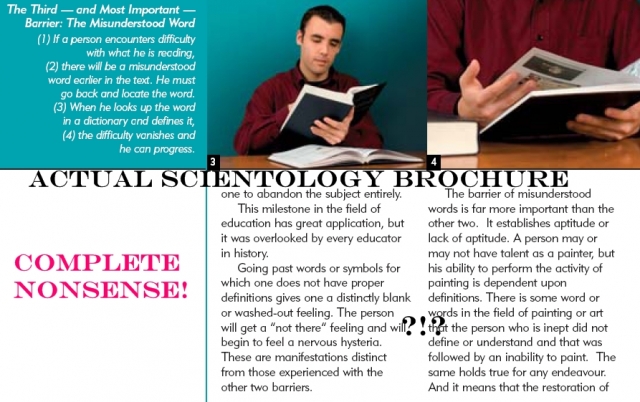 From Study Tech materials -- courtesy of David Touretzky's essay
http://www.studytech.org/study_tech.php
Add Your Comments
LATEST COMMENTS ABOUT THIS ARTICLE
Listed below are the latest comments about this post.
These comments are submitted anonymously by website visitors.