Add an Event
Newswire
Calendar
Features
Home
Donate
From the Open-Publishing Calendar
From the Open-Publishing Newswire
Indybay Feature
Related Categories: International | Global Justice & Anti-Capitalism
Scientology cult: Hubbard's Extreme Racism OK With Us
by Dr. Lilly von Marcab
Sunday Jun 29th, 2008 10:18 PM
The Scientology cult's founder, L. Ron Hubbard, was a white American middle-class male who grew up in the middle decades of the 20th century. It is not surprising, then, to learn that he was a racist and homophobe, and that there are many examples of these sentiments in his written and recorded works. What is surprising is that in the year 2008, the Scientology cult continues openly to embrace Hubbard's extremely offensive statements, and refuses to make even a small gesture to repudiate or reject Hubbard's hateful views. 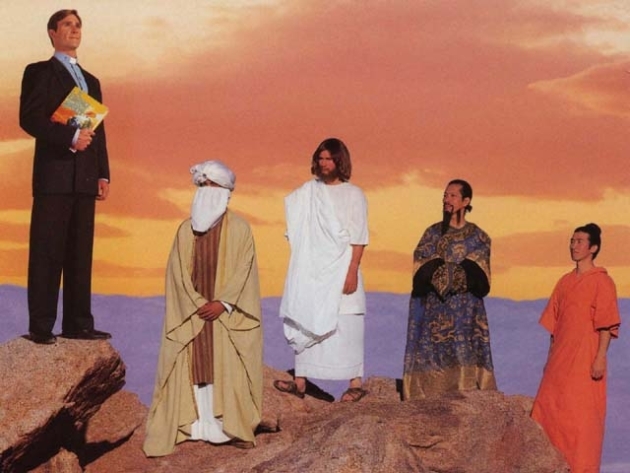 Instead, in a tacit approval, Hubbard's many books and recorded lectures in which these passages occur are re-published year after year after year, without any clarification, comment or footnote. Indeed, no individual Scientologist will personally reject these views, at least not in any public forum. To do so could earn him or her some time with the Rehabilitation Project Force (RPF), Scientology's internal corrections and re-education system.

According to one of the thousands of Scientology web sites:

"The Scripture of the Scientology religion consists of the writings and recorded spoken words of L. Ron Hubbard on the subjects of Dianetics and Scientology. This Scripture includes more than half a million written pages, over 3,000 tape-recorded lectures and some 100 films….This Scripture is the sole source of all doctrine regarding the religion of Scientology and it is an inherent principle of the religion that only by exactly following the path it outlines can mankind achieve spiritual salvation. This concept of orthodoxy in religious practice is fundamental to Scientology. Thus, any attempt to alter or misrepresent the Scripture is regarded as a most severe breach of ecclesiastical ethics."

Thus, it is simply not permitted to alter, modify, or update Hubbard's work in any way. In fact, it is official policy that members must "exactly follow Hubbard's path." Still, even with the "scriptures" remaining intact, this does not explain why the cult will not make a clear statement of its position on Hubbard's extreme views.

Here are a few examples of Hubbard's views on people of different races and sexualities than his.

(In his book "Science of Survival,: Hubbard establishes a "tone scale," ranging from -3 to +4, for classifying categories of people and evaluating human behavior. "Perverts," as he classified lesbian, gay, bisexual, transgender and queer people, fall at 1.1 on Hubbard's scale. He considered them to be extremely dangerous to society.)

Other people "low on the tone scale":

They just can't bring themselves to do it.

Thousands of people around the world are currently engaged in activism to make Scientology accountable for its human rights abuses, fraud, and many other forms of criminality. To join them, please visit http://www.xenu.net, http://www.youfoundthecard.com, and http://www.enturbulation.org.

In putting together this article, I gratefully acknowledge the work of Ted Mayett and Keshet (L. Ron Hubbard: Scientology, Dianetics and Racism) and Andreas Heldal-Lund (Operation Clambake).

http://www.factnet.org/Scientology/dianeti...
Add Your Comments
LATEST COMMENTS ABOUT THIS ARTICLE
Listed below are the latest comments about this post.
These comments are submitted anonymously by website visitors.