Add an Event
Newswire
Calendar
Features
Home
Donate
From the Open-Publishing Calendar
From the Open-Publishing Newswire
Indybay Feature
Publish to Newswire
Add an Event
Related Categories: Palestine | San Francisco | Anti-War
Some thoughts and reflections on Israel in Gardens, by an anti-Zionist, former Israeli,Jew
by Miko
Friday Jun 20th, 2008 8:27 PM
Or how I realized that I might not be an Israeli.
On June 1 I wandered into “Israel in Gardens”, a celebration of sixty years of Israel’s existence, in the Yerba Buena gardens in S.F. I was speculating whether there is anything to celebrate about a country that was established on a land belonging to Palestinians. I was also wondering what this kind of celebration would mean to me as a former Israeli, as someone who grew up in an Israeli culture.
Inside, the Zionists organizers (in my opinion) were trying desperately to win over or to convince bay area liberals (and maybe themselves as well) that Israel is some kind of a diversity heaven. Posters of Jews from different countries were presented all over the place, all happy and smiling. To push this point even deeper, Idan Riachel, a musician who makes music with Ethiopian Jews was invited to perform. C.D.’s of Riachel were given away in which Riachel is talking about going back to Jewish roots through these Ethiopian Jews. It was never mentioned that a lot Ethiopian Jews were denied entrance into Israel because of their religion (the Flashmora) was not deemed acceptable by Israeli authorities, or that blood donation from Ethiopian Jews was not accepted by Israeli hospitals, out of prejudice. Furthermore, no one mentioned the fact that while Ethiopian Jews who were detached from Israel for generations were allowed entry almost immediately, many Palestinians who live in Palestine or have family members who live in Palestine were not allowed to immigrate back into Palestine by Israeli authorities.

I started by walking through the entrance where heavy security was present. The security had nothing to do with a terrorist threat, but with a demonstration across the street that dared to mention the fact that the state of Israel was founded on Palestinian land (given by colonialist England to Zionist) or that some laws that are design to give privilege to Jews while taking rights from Palestinians. People who looked even slightly like activists (long hair, earrings, tattoos) were denied entrance, some of them Jews. “diversity” in Zionist terms means only the diversity that is stripped of its real meaning. 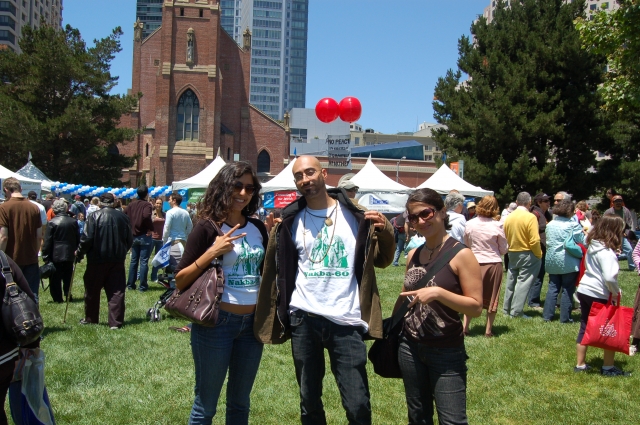 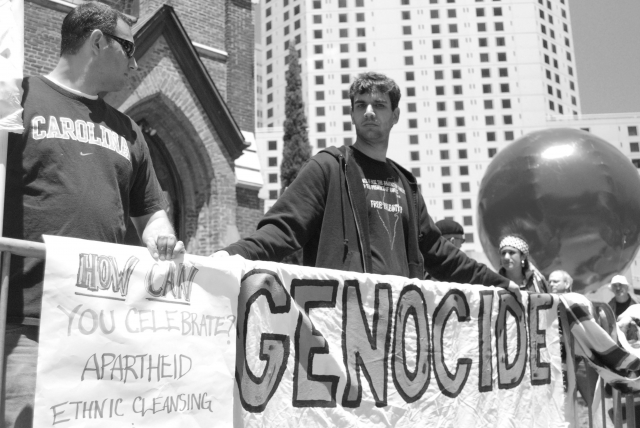 original image (3872x2592)
I started by walking through the entrance where heavy security was present. The security had nothing to do with a terrorist threat, but with a demonstration across the street that dared to mention the fact that the state of Israel was founded on Palestinian land (given by colonialist England to Zionist) or that some laws that are design to give privilege to Jews while taking rights from Palestinians. People who looked even slightly like activists (long hair, earrings, tattoos) were denied entrance, some of them Jews. “diversity” in Zionist terms means only the diversity that is stripped of its real meaning.
§
by Miko Friday Jun 20th, 2008 8:27 PM 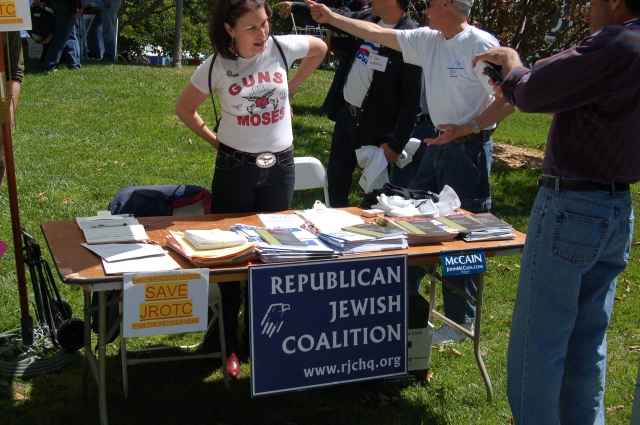 original image (3008x2000)
As I was walking in I was greeted by a table to my left. It was the Republican Jews Coalition. I was puzzled; long time supporters of the Republican Party are known for their Anti-Semitic views, most notoriously Pat Robertson and Jerry Falwell (not to mention Bush claming that Jews will not go to heaven). Don’t they see anything wrong with belonging to the same party that these people support? But then again, Israel itself accepts millions of dollars of donations from Christian groups who are very vocal in their anti-Semitic rhetoric (Jews killed Christ/are the Anti-Christ, Jews control the banks/ world conspiracy).
The t-shirt that the woman was wearing was another insult. It reads “Guns and Moses” with a menorah the Ten Commandments and symbol of the IDF on all sides of it. What do my traditional Jewish costumes have to do with guns? Isn’t the state of Israel supposed to be secular? I was confronted again and again during this event with the fact that the only thing that was celebrated about Israel is militarism. 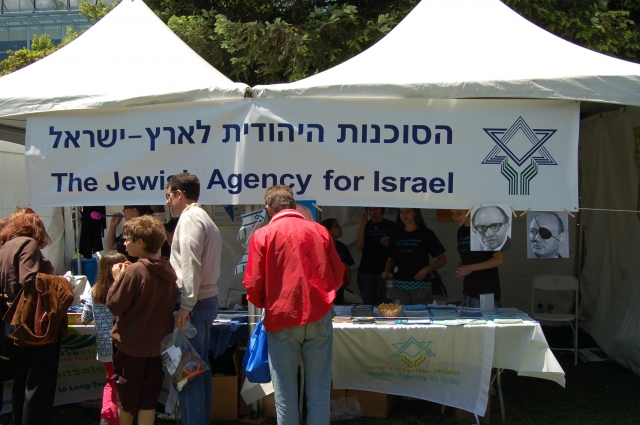 original image (3008x2000)
I kept walking, in front, the Jewish Agency with two pictures. The first is of Menahem Begin. Begin was part of and responsible for the massacre in Deir Yasin. While prime minister, He authorized the invasion of Lebanon (while accusing the PLO for an assassination that was caused by a rival Palestinian group). This led to the brutal occupation of south Lebanon for 18 years, and occupation that most Israelis today consider to be pointless. This occupation was occupancy by atrocities and war crimes committed by Israel and their mercenaries the SLA. The more famous are the Sabra and Shatila Massacre, and the torture committed in the infamous Khiam prison.
The other picture is of Moshe Dayan, who was the minister of defense during the Six Day War when Israel occupied the Golan Hights, Gasa, Sinai, and the west bank. Later in his life, Dayan confessed that the occupation and war were unnecessary. In regard to the Golan Heights he said in an interview to that:
“Never mind that [when asked that Syrians initiated the war from the Golan Heights]. After all, I know how at least 80 percent of the clashes there started. In my opinion, more than 80 percent, but let's talk about 80 percent. It went this way: We would send a tractor to plough someplace where it wasn't possible to do anything, in the demilitarized area, and knew in advance that the Syrians would start to shoot. If they didn't shoot, we would tell the tractor to advance farther, until in the end Syrians would get annoyed and shoot. And then we would use artillery and later the air force also, and that's how it was. I did that, and Laskov and Chara [Zvi Tsur, Rabin's predecessor as chief of staff] did that, Yitzhak did that, but it seems to me that the person who most enjoyed these games was Dado [David Elzar, OC Northern Command, 1964-69]."
In other words, the agency that is responsible for bringing more Jews into Israel is advertising the pictures of people who are nothing less then war criminals. 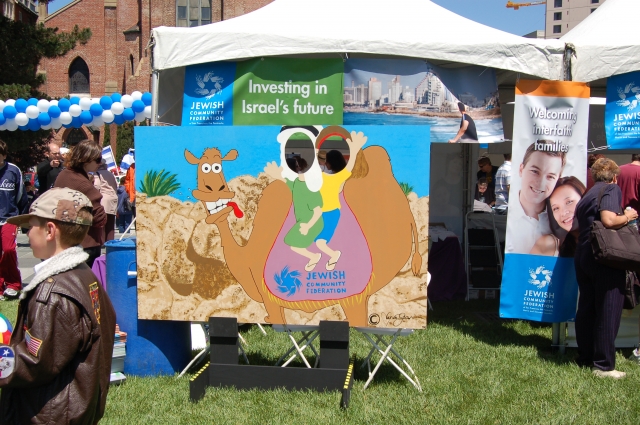 original image (3008x2000)
I left the agency table. On my right a picture of two characters on a camel was used for kids to take their picture with. Camels have nothing to do with Judaism or Israel and has more to do with Bedouins (another community of non Jews who have lived in Israel for generations which are extremely oppressed). What was even more offensive was that one of the characters had Kafia, a traditional Arab head scarf. I was reminded of American towns build on Native American land selling Indian cultural items. The similarity between Native-American and Palestinians is familiar to many Israelis, not in the way that one would expect. Beni Moris, one of the leading historians in Israel has claimed that atrocities committed by Israel against the Palestinian are justified, in the name of creating Israel. He, like many Israelis, takes his inspiration from the birth of America through the expulsion and massacre of Native American.
§
by Miko Friday Jun 20th, 2008 8:27 PM 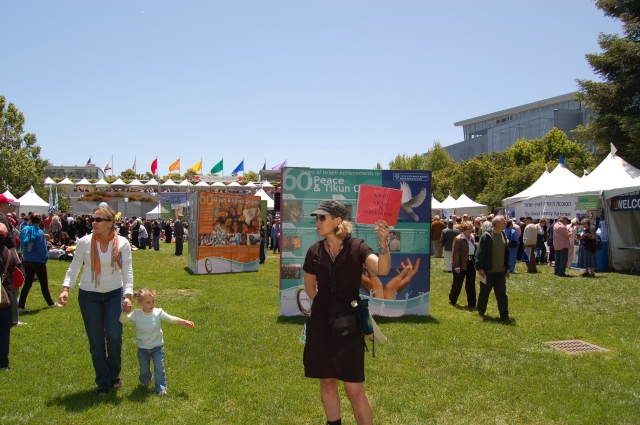 original image (3008x2000)
One women is holding a sign saying “Israel victim to perpetrators?”. I think she’s from Women in Black. A global women’s peace movement that in Israel has been attacked in sexist’s ways for demonstrating against the occupation.
§
by Miko Friday Jun 20th, 2008 8:27 PM 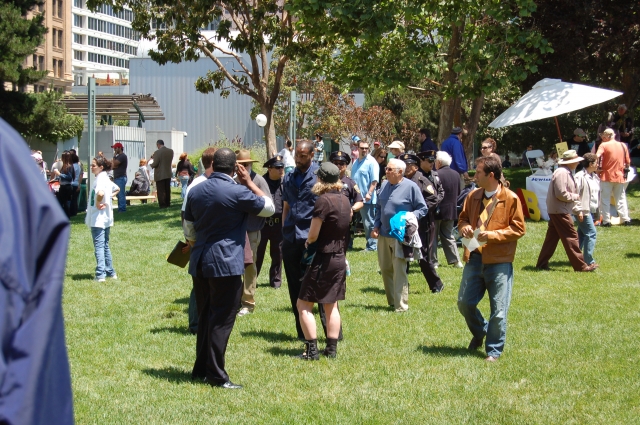 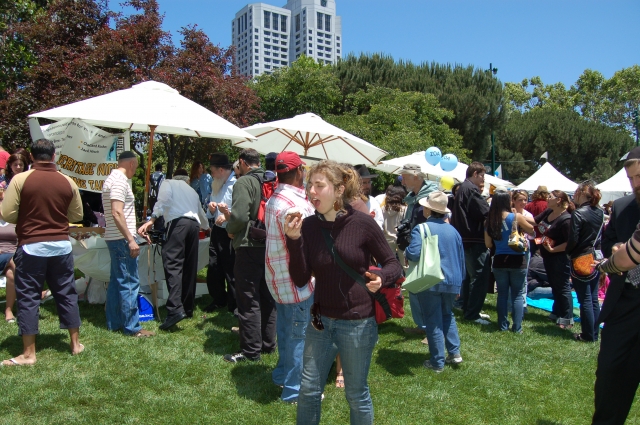 original image (3008x2000)
Another table, Chabad (stands for Hocma, Bina, Daat), a religious sect, are asking me if I have put on my Tefilin (a religious prayer item). I said that I did. Chabad belong to the Hasidic stream of Judaism and they like to advertise themselves as people who spread religion and love among Jews. Note JEWS, not Arabs, not Palestinians. Rabbi Schneerson, Chabad leader until his death recently, emphasized that according to the religious doctoring no one is allowed “to give” the “land of Israel” to Gentiles. During the 1995 election Chabad came with an election slogan that supported the right wing candidate (Netanyaho) because he was the best political runner for the Jews. That would not be very different from a group in America supporting a candidate because he is the best for white people.
§
by Miko Friday Jun 20th, 2008 8:27 PM 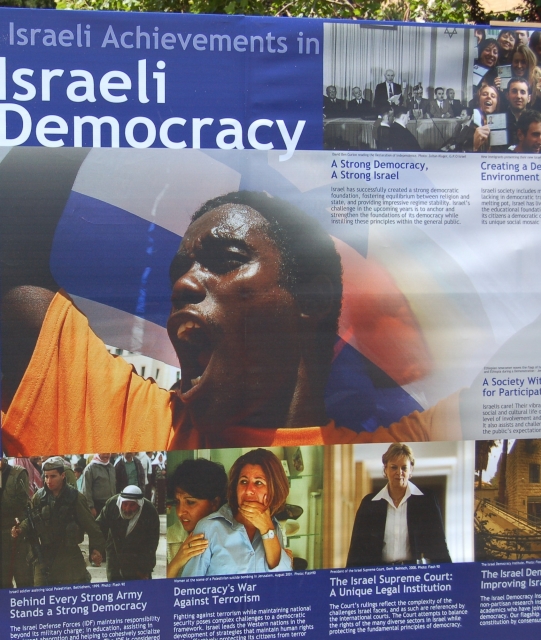 original image (1693x2000)
In the middle of the park a billboard, on the top right you can see Ben Gurion announcing the birth of Israel. Ben Guiron in the 50’s (while my grandparents were sprayed with DDT on their arrival to Israel from Iraq), made a speech to the Israeli Army where he emphasized the need of the military to educate Iraqi Jews in how to use the toilet, take showers, and prevented them from kidnapping women and raping them. He was expressing the viewpoint of the Founding Fathers of Israel in regard to non-European people. I wonder what he would think about the Ethiopian Jew shown at the center of the poster.
The other photos were just some more propaganda. In all of my life experience in Israel I never saw a soldier holding a Palestinian man’s hand (unless it was for arresting him) and the Supreme Court in Israel is just a rubber stamp for the most reactionary laws (such as the law prohibiting Jews and Palestinians to marry and to live in Israel). 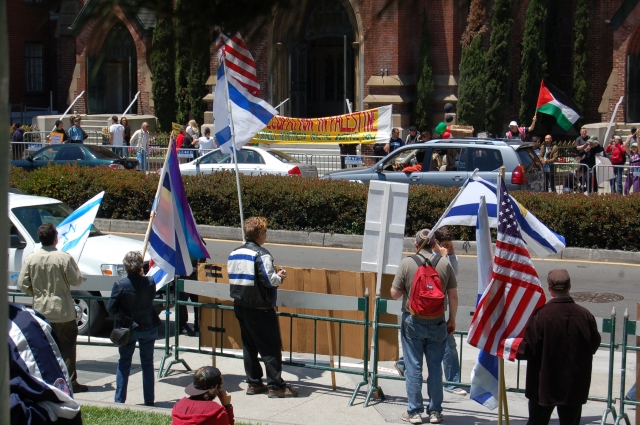 original image (3008x2000)
Outside leather coated thugs were marching around. Last time I listened to the person in the center (with the Star of David) he was claiming that Rachel Corey died while defending a weapon tunnel, and that the death of 33 kids in Lebanon by an Israeli bombing on civilian population was actually done by the Hisbala. Lately these days, any historical fact about atrocities and ethnic cleansing committed against the Palestinians is denounce by Zionists, justified, or claimed to be the Palestinians fault. I see less and less difference these days between Zionists and holocaust deniers.
§
by Miko Friday Jun 20th, 2008 8:27 PM 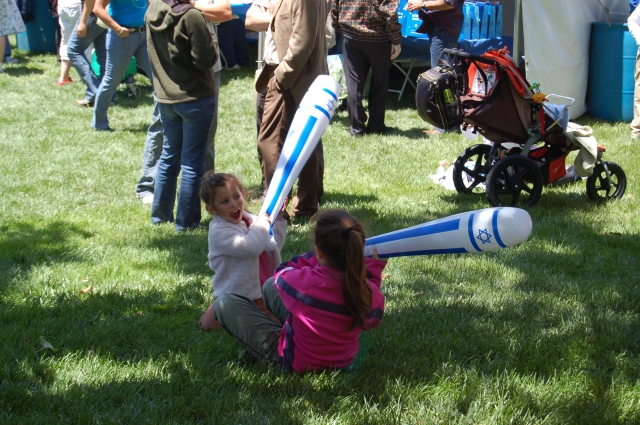 original image (3008x2000)
Kids playing with phallic toy weapons, with the flag of Israel printed on them. It seemed that everywhere I looked, people were celebrating militarism.
§a guy with an IDF hat.
by Miko Friday Jun 20th, 2008 8:27 PM 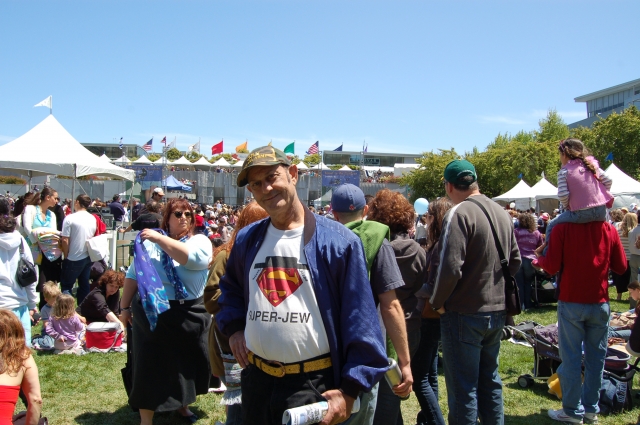 original image (3008x2000)
By that point I got sick from all the lies that were being propagated around me. I felt like I did not belong, that I did not fit in, and that I did not like any of the values that were celebrated. I did not celebrate guns and militarism and saw no connection between them and Judaism. I was not proud of people who started meaningless wars and committed war crimes, I was not going to camouflage (diversity!) the oppression that Misrahi Jews endured and still do for years in Israel, and I could not ignore deny or justify crimes and harm done to the Palestinians. Maybe I’m just not a super-Jew.