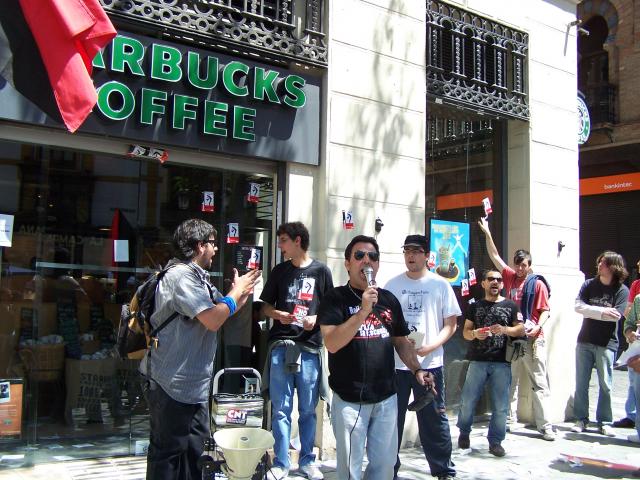 The Union of Comerical and Hotel workers CNT-AIT in Sevilla, Spain along with the Grand Rapids Starbucks Workers Union (IWW) have announced a Global Day of Action scheduled for July 5th. The two groups are asking social organizations, unions, and individuals from around the world to promote and participate in this day of action.

On April 24th, 2008 a barista named Monica was fired for her union activity from a Starbucks in Sevilla, Spain. She was a member of the Union of Commercial and Hotel Workers of the Confederacion Nacional de Trabajadores (CNT). Now with the support of all CNT affiliates, the International Workers Association, and the Starbucks Workers Union (IWW) they are demanding justice for Monica.

The treatment of Monica in Spain by Starbucks is similar to the charges of anti-union discrimination being investigated by the National Labor Relations Board in Grand Rapids, Michigan. This new Grand Rapids investigation comes less than a year since Starbucks signed a settlement agreement with the NLRB claiming they would end intimidation against baristas interested in joining the Starbucks Union.

The Grand Rapids Starbucks Workers Union (IWW) calls on everyone interested in social justice and worker's rights to confront global coffee giant Starbucks on July 5th with international solidarity. For Monica in Spain, for baristas in Grand Rapids, and for coffee farmers around the globe.

The CNT of Sevilla have produced a weblog for the Day of Action (in spanish):
http://seccionstarbuckscnt.wordpress.com/

To get involved locally contact:
Grand Rapids Starbucks Workers Union
grandrapidsstarbucksunion [at] yahoo.com
616-881-5263
PO Box 6629
Grand Rapids, MI 49516
http://www.starbucksunion.org/node/2017
Add Your Comments
Support Independent Media
We are 100% volunteer and depend on your participation to sustain our efforts!