Add an Event
Newswire
Calendar
Features
Home
Donate
From the Open-Publishing Calendar
From the Open-Publishing Newswire
Indybay Feature
Publish to Newswire
Add an Event
Related Categories: California | Santa Cruz Indymedia | Education & Student Activism | Government & Elections | Labor & Workers
UC Workers and Students Block California Highway 1 in Santa Cruz to Protest Poverty Wages
by ~Bradley (bradley [at] riseup.net)
Saturday Jun 7th, 2008 8:15 PM
On June 6th, George Blumenthal was inaugurated as the 10th Chancellor of UC Santa Cruz during a ceremony on the East Field overlooking the Monterey Bay. To mark the occasion, students and workers, organized through the Student and Worker Coalition for Justice (SWCJ) and the American Federation of State, County, and Municipal Employees (AFSCME) rallied at UCSC, marched to the Chancellor's Inauguration and blocked California Highway One at Mission and Bay during a 10-hour day of action to deliver a loud and clear message -- end poverty wages at the University of California. 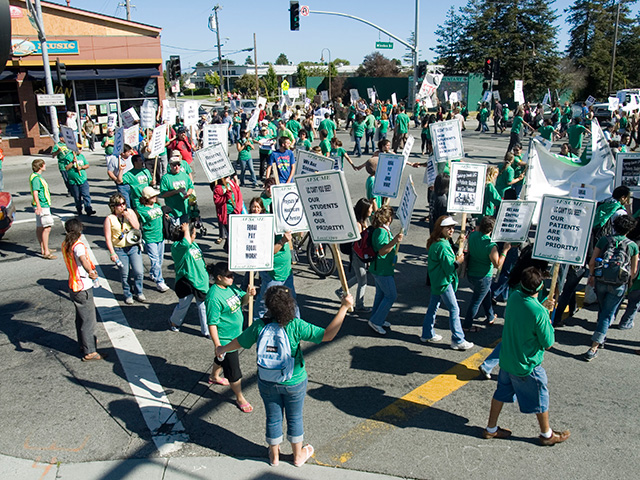 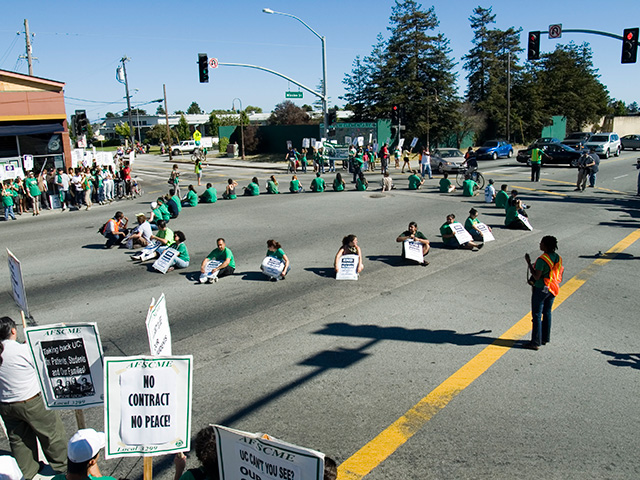 Some Santa Cruz locals were very supportive of the demonstration. One women, an SEIU member who worked at Santa Clara Valley Medical Center, joined the demonstration on Bay Street in strong support. She said that closing Highway One was very significant!
§End Poverty Wages at the University of California
by ~Bradley Saturday Jun 7th, 2008 8:15 PM 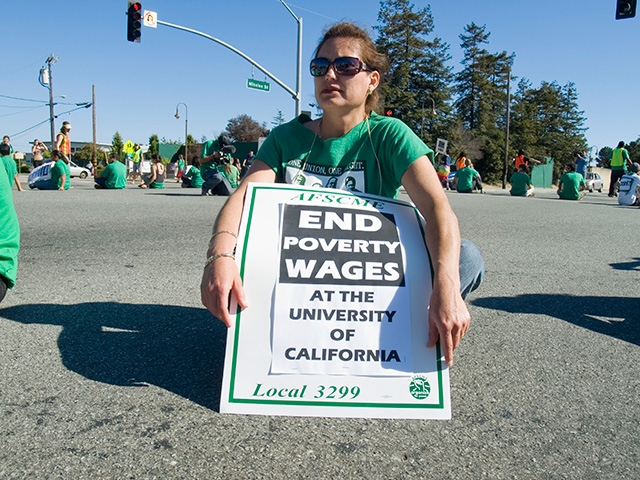 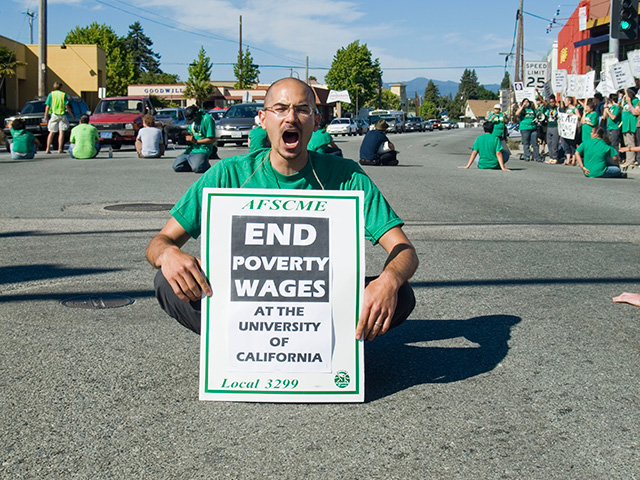 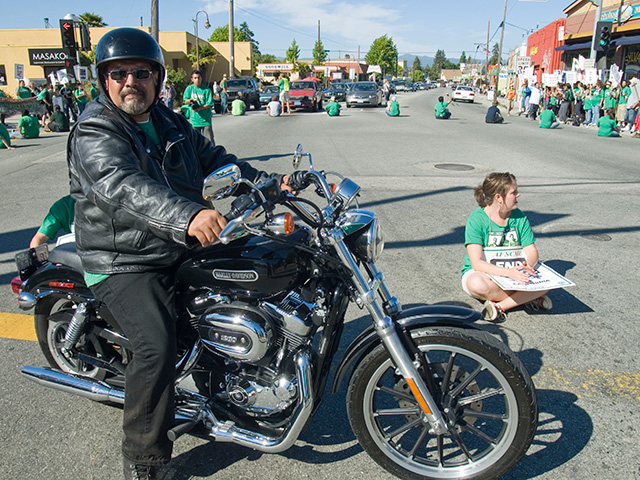 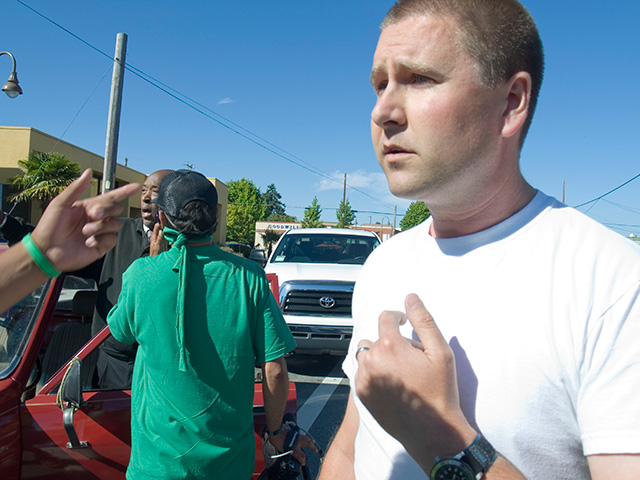 The confrontational man in the white shirt identified himself as a law enforcement officer. He eventually turned his truck around and took an alternate route like all the other drivers.
§Lilia and Yolanda
by ~Bradley Saturday Jun 7th, 2008 8:15 PM 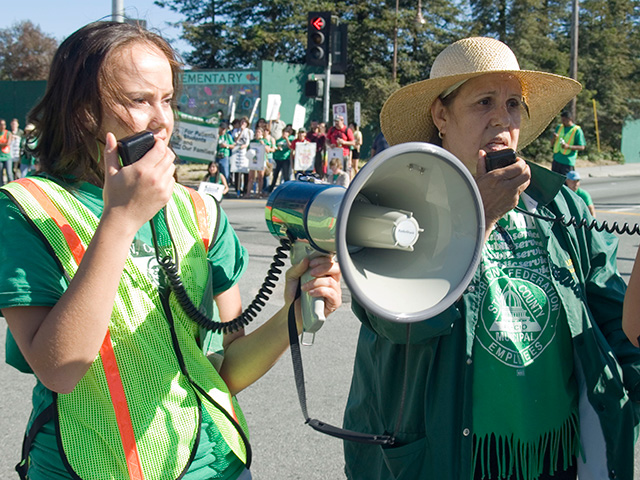 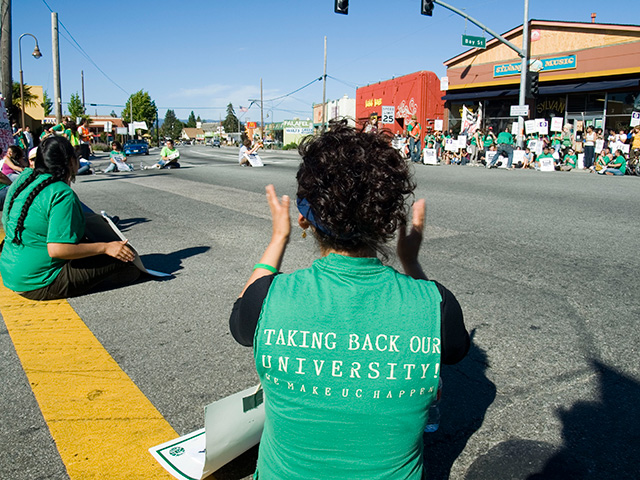 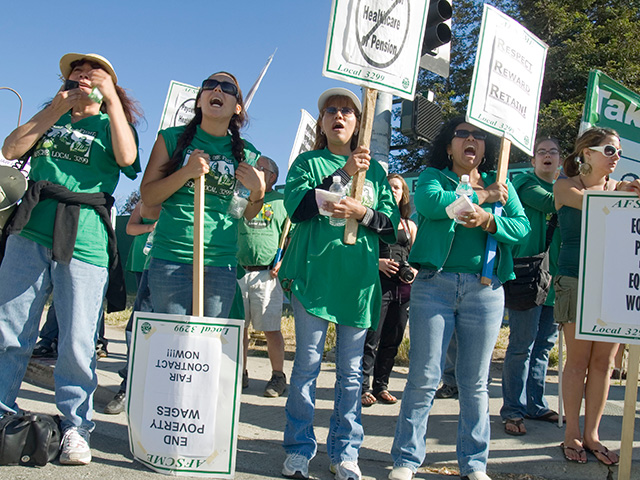 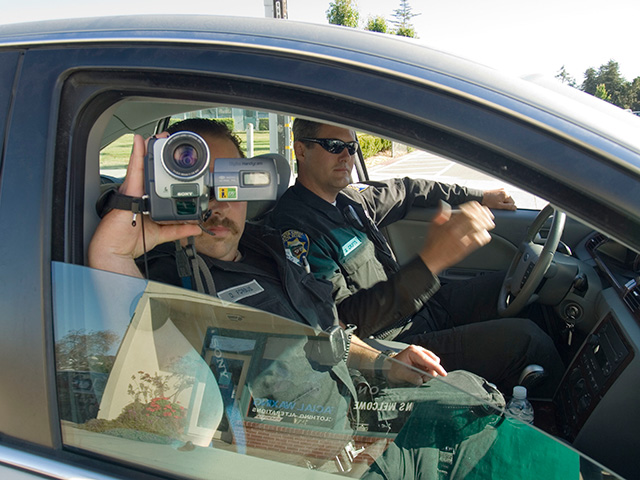 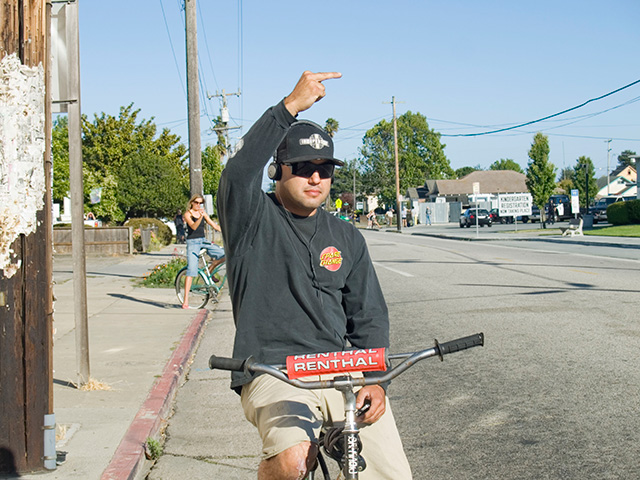 Born and raised in Santa Cruz, and a former student at Bay View Elementary, this local said it has become very difficult to get work in construction. He also complained that people should protest and shut down traffic in the city where they came from. Many people who grew up in Santa Cruz despise students at UCSC who generally live in Santa Cruz for less than five years.
§Zach Friend
by ~Bradley Saturday Jun 7th, 2008 8:15 PM 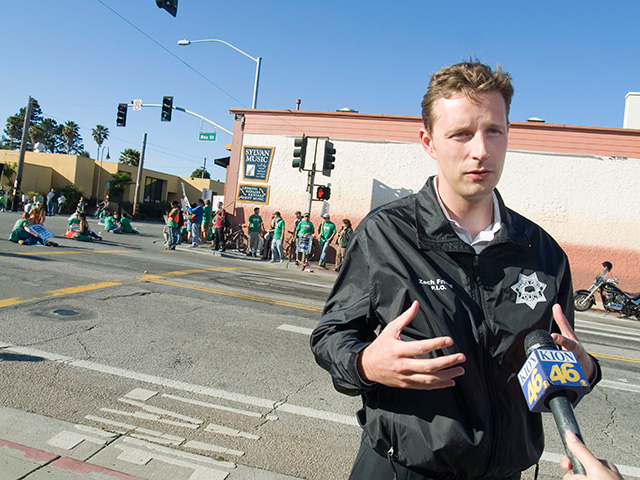 Zach Friend, the Public Information Officer for the SCPD said that it cost police $15,000, there were a couple dozen police officers on overtime, however he was not getting overtime. Police were redirecting vehicle traffic which was backed up a 1/2 mile in all four directions. The police were not going to arrest people until it became a safety hazard which he said would probably be when it got dark.
§Meeting in the Street
by ~Bradley Saturday Jun 7th, 2008 8:15 PM 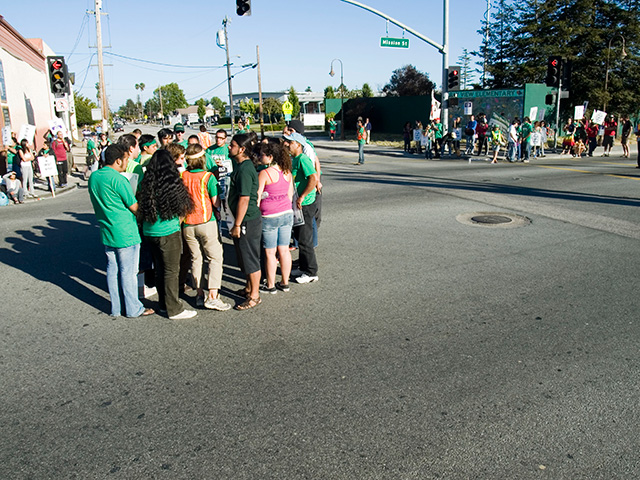 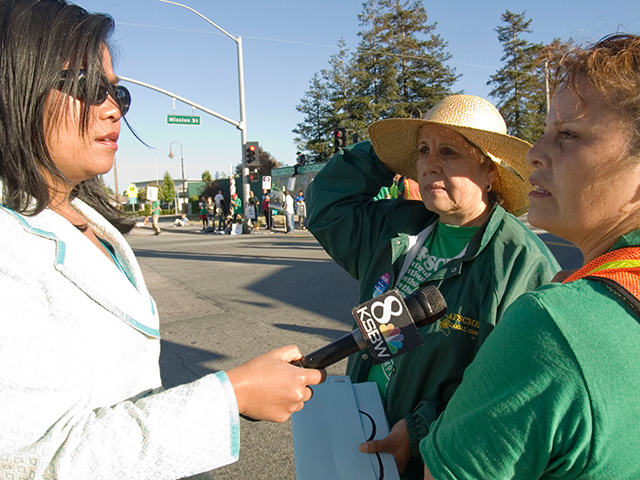 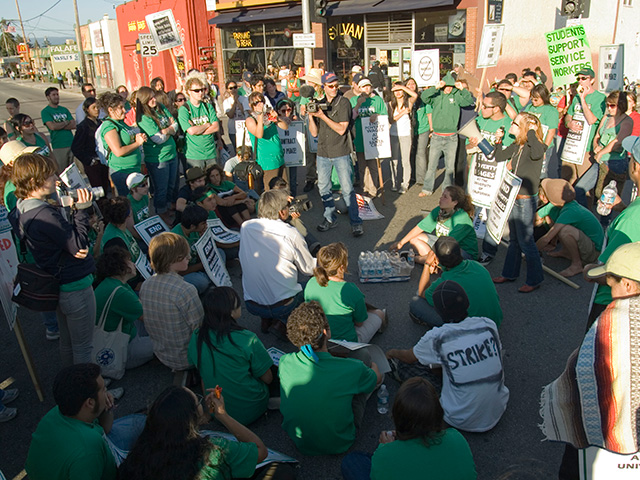 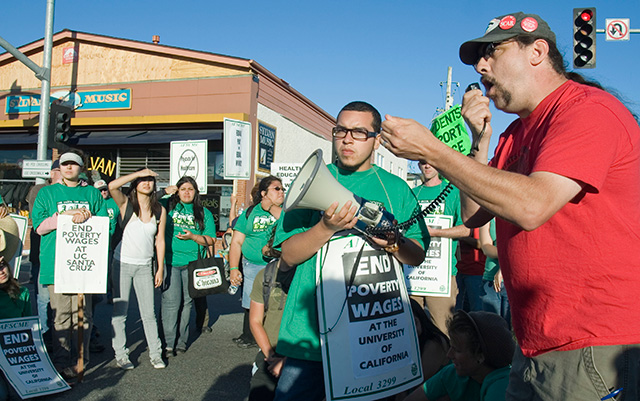 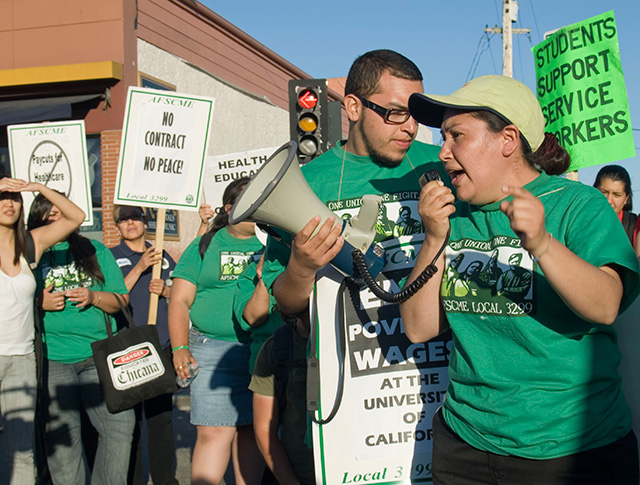 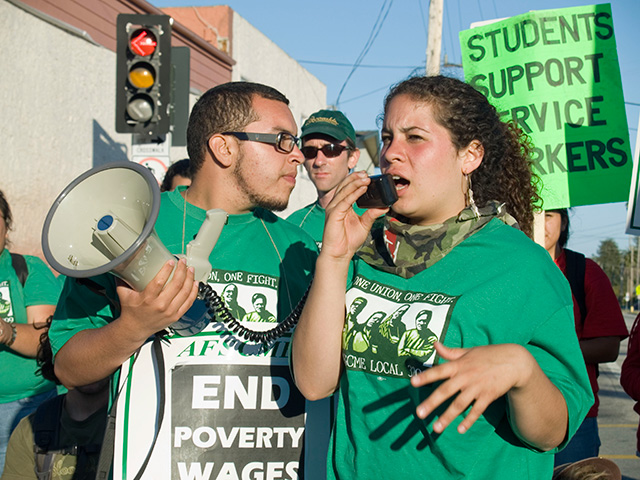 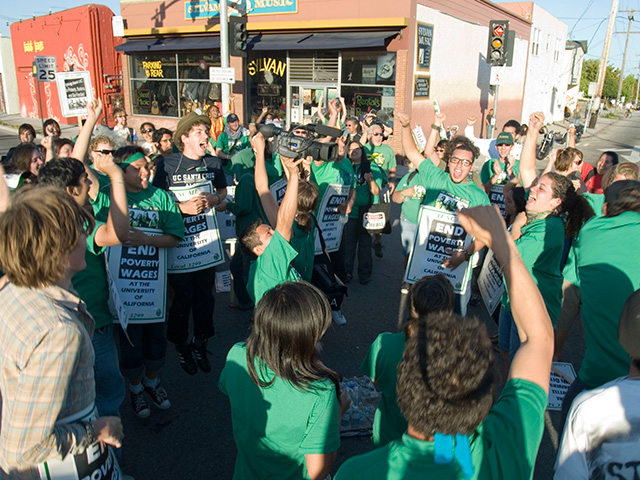 After about two and a half hours, those engaged in civil disobedience decided to leave the streets and call the day a success.
§Pride
by ~Bradley Saturday Jun 7th, 2008 8:17 PM 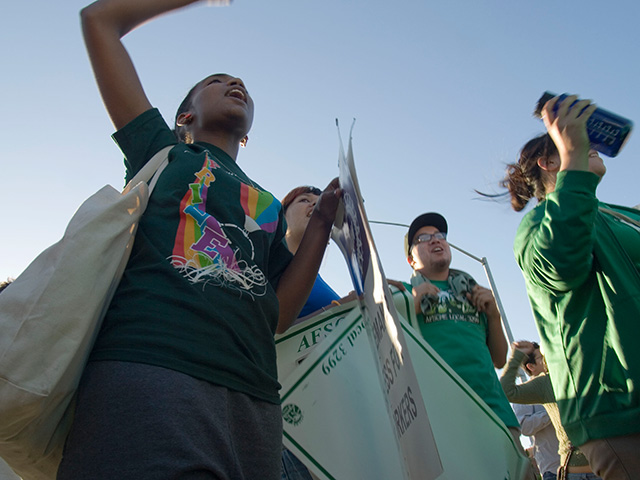 Some.. but not as many as they'd like you to think.

I went to Bayview, then after graduating SC High, went to UCSC. Yeah, there are some locals that are anti-student, but they're a vocal minority. Most locals have issues with the expansion of UCSC, yes, but that is a different matter. The more students that speak out against expansion, the more unity there'll be.

It's also interesting to point out that some of those complaining about ucsc students were former students themselves.. from the 70s, 80s, etc.. It's more about parties in their neighborhoods (in part 'cus of the lack of options for youth in town) than it is about the school or students in general.

We should be careful not to reinforce these stereotypes..

I feel that the messaging from AFSCME and SWCJ was not super clear and the targeting of the message was even less clear. Some locals were upset, however other locals joined the demonstration or voiced their support.

I spoke with some people at the café / newsstand. One man was very upset, but he could not explain why. He said that back in the day he took part in People's Park in Berkeley, and that now he spoke for everyone in the neighborhood to say that nobody supported the demonstration. A young female customer on a break from studying for law school interjected to say that she lives on Laurent, she was delayed by the demonstration, supports the workers, and did not mind the inconvenience. She was a former student at UCSC and then graduated from Berkeley where she served on the board of People's Park. She was also a friend of SCPD PIO Zach Friend.
The guy eventually made a sign on wood with spray paint that said something like: nobody supports the workers. The sign was placed on the corner of Mission and by the newsstand.

The man who was likely the owner of Masako Sushi was very upset and complained to the police. I'm guessing he was upset at the loss of business as a result of the demonstration which re-routed all cars away from the restaurant.

Falafel of Santa Cruz workers were passing out cups of water to demonstrators.

A worker at Sylvan Music looked a bit upset, but I did not hear him verbalize it as he locked the door at closing time. The guy from Masako Sushi told the police that he spoke with the people at Sylvan Music.

@ local: I don't mean to reinforce stereotypes. Thank you for both pointing it out and not despising students at UCSC.

@ Mike: Thanks for the compliment.

@ barrio resident: I'm not sure if most UCSC service workers are locals too. Also, I'm not sure how many years one must live in Santa Cruz to be considered a "local" -- someone else here can let us know. It is my understanding that many AFSCME members commute from Watsonville to UCSC. Some workers use UCSC's carpool vans for transportation. Another conception that I have is that high prices in Santa Cruz serve to push UCSC service workers farther away from campus.

One reason that I contribute to indymedia is to try and increase the dialogue between Santa Cruz and the "City on the Hill." I appreciate the constructive comments.
Add a Comment
§Bravo
by Robert Norse
Monday Jun 9th, 2008 9:43 AM
Nice work, Bradley, in covering different sides of the protest. Not to mention the cool pictures.
Add a Comment
§Local opinion
by JD
Monday Jun 9th, 2008 11:15 AM
Being born and raised here in Santa Cruz, I think there are many more people who agree with the man in the black shirt on the bicycle than not. Almost everyone I know will tell you that UCSC is nothing but an annoyance, and their transient student population doesn't bring anything positive to the community. If the UC workers have a problem with how the UC administration is handling their contract, how does that merit a protest which inconveniences city residents who have nothing to do with the UC? Do you want to make us more aware of your plight? We hear about it from various media outlets, we're already aware of the situation.

Much like having a slow speed bicycle ride on Mission to increase driver awareness of bicycles using the full lane is NOT a way to gain support from motorists, this was another failure supported by the UCSC students who are quick to rally to any cause that will provide them with an opportunity to be disruptive.

I was fortunate enough to have been warned early in the day about this protest so I didn't even bother going home after work as I travel through Mission and Bay during my commute. I can understand the position of the SCPD not wanting to cause a disruption, since most of these students would start to scream policy brutality as soon as an officer attempted to move them out of the street (that they were illegally sitting in). I'm still disappointed though, SCPD needs to take a stand against these demonstrations on Mission Street that have been occurring without a proper permit. If they don't they'll end up like the Berkeley PD who regularly stand by and watch illegal demonstrations without acting, further encouraging the demonstrators the push their limits.
Add a Comment
§yes, a failure...
by Afscme organizer
Monday Jun 9th, 2008 1:04 PM
To the poster above, criticizing the police lack of action:

This was part of a deliberate strategy by the police to disempower our protest, not "letting us get away with something". Many of us wanted to get arrested so we could get more press attention to our cause, and so we could photograph the actions of the police. Unfortunately, they did not bite and refused to arrest us. Some of us tried to explain that we wanted to get arrested as part of a civil disobedience effort, but they just laughed at us and left us hanging out to dry.

It was a very effective strategy, sapped much of the power of our demo, and left us as a target of fury for Santa Cruz residents, a fury that we had hoped would be directed toward the UC and the Regents instead.

This is a problem for activists movements in Santa Cruz if police continue to follow a "no arrest" policy at demos.

Add a Comment
§I trust AFSCME will blockade the Graduations?
by Shut them down?
Monday Jun 9th, 2008 1:31 PM
If ASCME wants to be consistent in their message and methods, I can assume they'll block the intersections and shut down this weekend's graduations too...right?

-Uneccessary charade and ceremony, just as they complained the graduation was.

-Waste of money in a bad budget year; money that could go towards AFSCME raises.

-Would educate tens of thousands of UC parents when they arrive to see their kids graduate.

SHUT IT DOWN! BLOCK THE GRADUATIONS!

Of course, it's a different story when those tactics are used against your supporters, isn't it?
Add a Comment
§maybe
by maybe not
Monday Jun 9th, 2008 1:36 PM
"...there are tentative protests planned for next week's UCSC commencement ceremony. ... a number of speakers who are scheduled to speak at the ceremony will only speak if workers are granted fair wages."
Add a Comment
§locals
by cp
Monday Jun 9th, 2008 1:56 PM
I hate the 'locals' perspective. Most cities have some sort of college, and to act like people in their 20s are all usurpers who have no right to rent in any neighborhoods is ridiculous. It's pretty clear that students graduating from Santa Cruz High cannot afford to buy in this city, and either need to inherit or move into mom's garage.

Anyone who travels and mentions that they are from Santa Cruz probably hears an impression that Santa Cruz is famous for skateboarding, then surfing. That is the city's national brand. One of the only ways for this city to be broadly shared and for young people to be here, even for four years, is by attending the school. If we decide that only owners and 'locals' have a right to be here, the city would transform into Monterey or Rio Del Mar very quickly, with a demographic oriented towards retirees and no children. This is especially true as many people spit upon lower income immigrants with children too (see some comments section of the Sentinel); how many children would there be here w/o them because middle class aspiring people can't afford kids in this spot. Now, older people make a lot of cultural contributions too, but Santa Cruz would not be what it is w/o the youth culture either.
Add a Comment
Support Independent Media
We are 100% volunteer and depend on your participation to sustain our efforts!