by Mike Rhodes (MikeRhodes [at] Comcast.net)
The homeless and their advocates achieved an enormous victory today. A Federal Court in Fresno approved a settlement of over $2 million for the destruction of their personal property. The settlement is the largest of its kind in the entire country. The photo below was taken in front of the Federal Courthouse, immediately after the settlement was announced. The person in the photo (center) is Pamela Kincaid. She was the lead plaintiff in the case who died under suspicious circumstances on August 1, 2007. 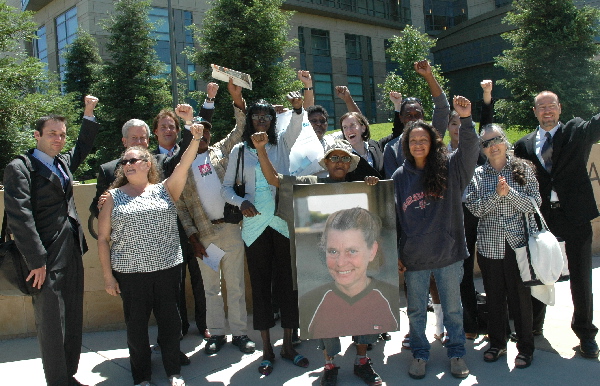 FRESNO – United States District Judge Oliver W. Wanger gave preliminary approval today to a $2.35 million dollar class-action settlement between a class of hundreds of homeless Fresno residents and the City of Fresno and the California Department of Transportation. The court had already determined that Fresno’s practice of immediately seizing and destroying the personal possessions of homeless residents violates the constitutional right of every person to be free from unreasonable search and seizure. The homeless plaintiffs in the lawsuit, Kincaid v. Fresno, were represented by a team of attorneys from the American Civil Liberties Union of Northern California (ACLU-NC), the Lawyers’ Committee for Civil Rights (LCCR) and the law firm of Heller Ehrman LLP.

“The Court’s ruling and the settlement should send a strong message to other cities throughout our country that if they violate the rights of their most vulnerable residents, they will be held accountable,” said ACLU-NC staff attorney Michael Risher.

Plaintiff Al Williams suffered the effects of the raids on three occasions. In addition to losing clothes and food, his wife’s wheelchair was destroyed and her medicines confiscated by Fresno police officers. “I felt like everything was taken away from me, but this settlement gives me hope for the future for myself and all the other people who suffered,” said Williams, who now hosts a local radio show in Fresno.

“Many homeless people lost everything they owned to the City’s trash compactors and bulldozers. With this settlement, they can access what has always been the solution to homelessness: a safe, clean place to live,” said Elisa Della-Piana, an attorney with the Lawyers’ Committee.

Funds from the multi-million dollar settlement, which attorneys called “unprecedented,” will go to individual plaintiffs whose belongings were destroyed in the illegal sweeps, as well as into an account to provide housing and medical care to the approximately 225 class members.

The case was filed in October 2006 on behalf of homeless people whose personal property, including essential medications, family photographs and vital documents had been confiscated by police and City workers. The court issued a temporary restraining order against the City of Fresno two days later; in December 2006, the court issued a preliminary injunction prohibiting the City from continuing to seize and destroy the property of homeless people.

During oral argument on April 25, 2008, Judge Oliver W. Wanger of U.S. District Court of the Eastern District of California declared that “the practice of announce, strike, seize [and] destroy immediately is against the law.”

At least three of the plaintiffs have passed away since the suit was filed, including the lead plaintiff Pamela Kincaid.

The settlement agreement contains a series of procedures created to ensure that the violations will not recur. The City of Fresno will require authorities to post written notice at least three days before clearing any personal property from an encampment area, and items of apparent value will be stored for 90 days. The Department of Transportation has also agreed to comply with the legal principles set forth in the Court’s preliminary injunction, throughout the state. The Court will retain jurisdiction over the case for five years to ensure that the City and Caltrans comply with this agreement.

The City of Fresno will pay $1,000,000 into a Housing Allowance Account. Funds from the account will assist the approximately 225 class members in the lawsuit to meet costs related to housing including security deposits, first and last months rent, or monthly rental payments, or to purchase a vehicle or medical care. The money will be issued by the Settlement Administrator to landlords or other providers of basic goods or services.

The City will set aside $400,000 in cash to compensate a pool of individuals who suffered harm as a result of the unconstitutional seizure of property. Individuals will file claim forms describing the extent of their losses and the number of times they were subjected to the illegal sweeps. Disbursements from this portion of the settlement will range from $500 - $5000, and will be paid over time in currency or by check, or be deposited into plaintiff’s individual bank accounts.
The Department of Transportation will pay $85,000 into this cash fund.

The ACLU-NC and LCCR will use the attorneys’ fees awarded in the case for programs to protect the legal rights of poor and homeless people, and to oppose the abuse of government power.

Attorney Paul Alexander, formerly of the firm Heller, Ehrman LLP, volunteered more than 1,000 hours on the case. His legal team was recognized in 2007 with the State Bar of CA President’s Pro Bono Service Award for their “around the clock” efforts. The firm pursued the case on a pro bono basis, and will not recover any fees in the settlement.

“For the homeless in Fresno this case has been a watershed event,” said Alexander. “They have stopped the destruction of their property. They have caused new rules on dealing with the homeless to be created. They have gained compensation for the losses they suffered. But most importantly of all, they have shown that in this country, the Constitution applies to everyone and that our federal courts are a place where justice can be found, even if you are homeless and down and out.” 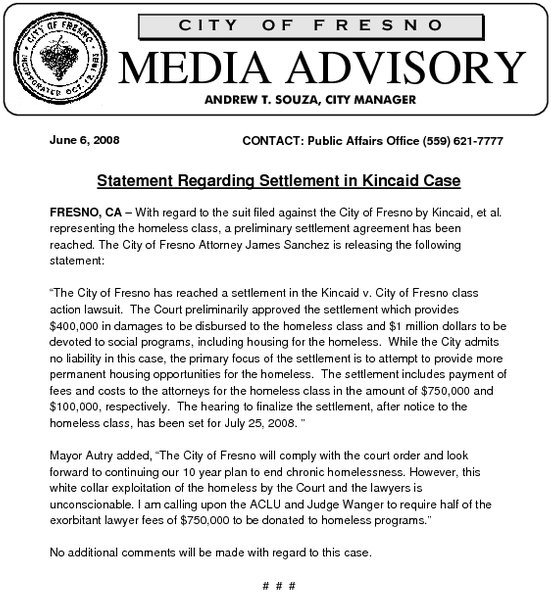 Download PDF (38.0KB)
The City of Fresno has just issued the attached statement regarding the homeless settlement. Mayor Alan Autry says "this white collar exploitation of the homeless by the Court and the lawyers is unconscionable."

§Standing up for Justice
by Mike Rhodes
Copy the code below to embed this movie into a web page:
Download Video (24.1MB) | Embed Video
5:54 minute video of the lead attorneys in this case discussing the victory.
Add Your Comments
Latest Comments
Listed below are the latest comments about this post.
These comments are submitted anonymously by website visitors.
TITLE
AUTHOR
DATE
Exploitation by whom?
DougR
he's not acting
kelly
the mayor
white collar
Support Independent Media
We are 100% volunteer and depend on your participation to sustain our efforts!