Add an Event
Newswire
Calendar
Features
Home
Donate
From the Open-Publishing Calendar
From the Open-Publishing Newswire
Indybay Feature
Publish to Newswire
Add an Event
Related Categories: Central Valley | Arts + Action
U. Utah Phillips Has Passed Away
by Mike Rhodes (MikeRhodes [at] Comcast.net)
Saturday May 24th, 2008 1:45 PM
Utah's Web site has just posted an update and link, so the news is confirmed:

The Utah Phillips website is worth spending some time on, including blogs, music and photos of and about this wonderful man. He will be greatly missed.

The KVMR link includes one of Utah's last letters and updates. 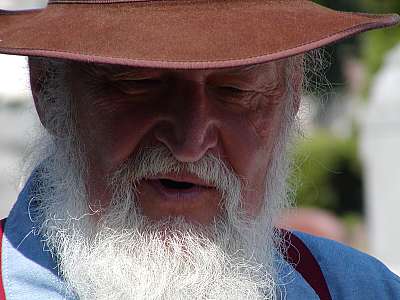 Here is what Wikipedia ( http://www.wikipedia.org ) has to say about Utah:

Bruce "Utah" Phillips served in the United States Army for three years beginning in 1956. Witnessing the devastation of post-war Korea greatly influenced his social and political thinking. Following service, he returned to Salt Lake City, Utah and joined Ammon Hennacy from the Catholic Worker Movement in establishing a mission house of hospitality named after the activist Joe Hill.[2] [3]Phillips worked at the Joe Hill House for the next eight years, then ran for the U.S. Senate as a candidate of Utah's Peace and Freedom Party in 1968. He received 2,019 votes (0.5%) in an election won by Republican Wallace F. Bennett.

Phillips met folk singer Rosalie Sorrels in the early 1950s, and has remained a close friend of hers ever since. It was Sorrels who started playing the songs that Phillips wrote, and through her his music began to spread. After leaving Utah in the late '60s, he went to Saratoga Springs, New York, where he was befriended by the folk community at the Caffé Lena coffee house, where he became a staple performer throughout that decade.

An avid railfan, Phillips has recorded several albums of music related to the railroads, especially the era of steam locomotives. His first recorded album, Good Though!, is an example, and contains such songs as "Daddy, What's a Train?" and "Queen of the Rails" as well as what may be his most famous composition, "Moose Turd Pie" [4]wherein he tells a tall tale of his work as a gandy dancer repairing track in the Southwestern United States desert.

In 1991 Phillips recorded, in one take, an album of song, poetry and short stories entitled I've Got To Know, inspired by his anger at the first Gulf War. The album includes "Enola Gay," his first composition written about the United States' atomic attack on Hiroshima and Nagasaki.

Phillips was a mentor to Kate Wolf. He has recorded songs and stories with Rosalie Sorrels on a CD called The Long Memory (1996), originally a college project from Montana. Ani DiFranco has recorded two CDs, The Past Didn't Go Anywhere (1996) and Fellow Workers (1999), with him. He was nominated for a Grammy Award for his work with Ani DiFranco. His "Green Rolling Hills" was made into a country hit by Emmylou Harris, and "The Goodnight-Loving Trail" has become a classic as well, being recorded by Ian Tyson, Tom Waits, and others.

Phillips has become an elder statesman for the folk music community, and a keeper of stories and songs that might otherwise have passed into obscurity. He is also a member of the great Traveling Nation, the community of hobos and railroad bums that populates the midwest United States along the rail lines, and is an important keeper of their history and culture.

When Kate Wolf grew ill and was forced to cancel concerts, she asked Phillips to fill in. Suffering from an ailment which makes it more difficult to play guitar, Phillips hesitated, citing his declining guitar ability. "Nobody ever came just to hear you play," she said. Phillips tells this story as a way of explaining how his style over the years has become increasingly based on storytelling instead of just songs. He is a gifted storyteller and monologist, and his concerts generally have an even mix of spoken word and sung content. He attributes much of his success to his personality. "It is better to be likeable than talented," he often says, self-deprecatingly.

Until it lost its funding, Phillips hosted his own weekly radio show, Loafer's Glory: The Hobo Jungle of the Mind.

Phillips died on May 23, 2008 in Nevada City, California, of complications of heart disease. [1]

http://utahphillips.org/
Add Your Comments
LATEST COMMENTS ABOUT THIS ARTICLE
Listed below are the latest comments about this post.
These comments are submitted anonymously by website visitors.