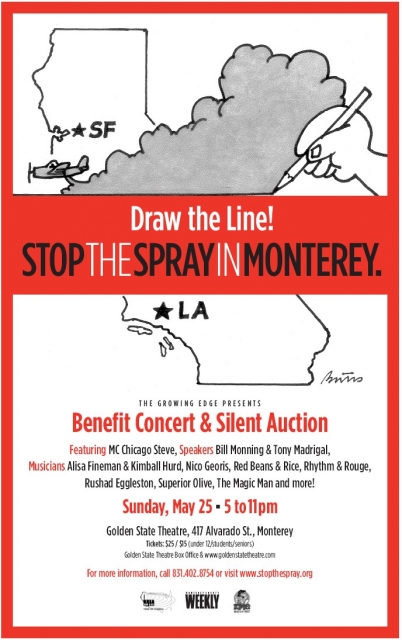 original image (688x1095)
END_OF_DOCUMENT_TOKEN_TO_BE_REPLACED
Add Your Comments
Comments (Hide Comments)
§B E N E F I T C O N C E R T & S I L E N T A U C T I O N
by STSiM
Although both Santa Cruz and Monterey Counties have won a temporary reprieve from the spraying, until the CDFA completes the EIR (estimated to be in Jan. 2009), efforts to stop the spraying permanently continue. Unfortunately, the Bay Area is still subject to being sprayed on or after the Aug. 17 date. Whether or not you can attend this event, please activate your email lists and let others, especially those in Monterey, know about it. Thanks!

Raising awareness of the State's pesticide applications over urban populations.


The reason behind for the benefit...
The California Dept of Food & Agriculture aerially sprayed pesticides
over Monterey and Santa Cruz counties in the fall 07.
Over 640 people reported adverse health effects from it.

The CDFA currently plans to resume aerial spraying of a new chemical concoction
every 30-90 days, 9 out of 12 months, for the next 2-10 years.

Concerned citizens are pushing for safer alternatives
and for rigorous studies of short- and long-term health impacts before spraying.

The pesticide treatments have been unsafe, ineffective and unneeded.

Show your support. Buy tickets. Attend this great concert on May 25th.

For tickets, go to http://www.goldenstatetheatre.com.

For additional information, call (831) 402 8754 or eaglesorhi [at] aol.com.
END_OF_DOCUMENT_TOKEN_TO_BE_REPLACED
Add a Comment
Support Independent Media
We are 100% volunteer and depend on your participation to sustain our efforts!