by Mara
The first forum on April 6th was very successful with 100 attendees, 7 speakers, 5 small group workshops, and a comment/announcement period. This follow up forum is to continue the work on solutions to the problems at KPFA and Pacifica.
Come, whether you participated in the last forum or missed it!
NEW! - Now see the speakers and topics below 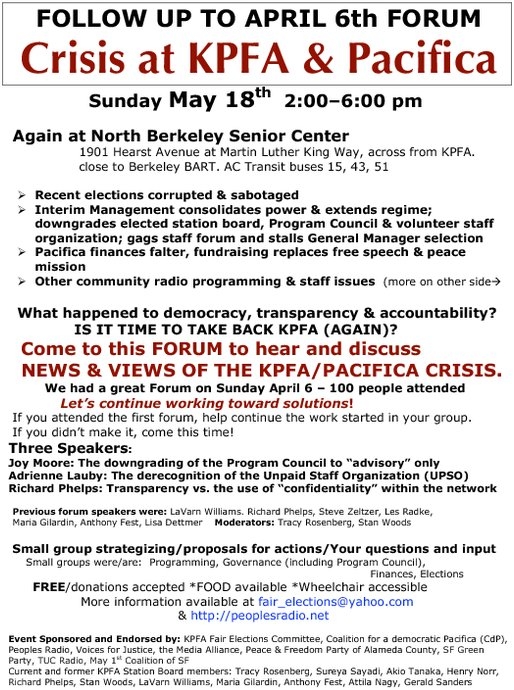 For a report of the event: http://www.peoplesradio.net/events.htm

Here is page 2 of the leaflet:

• Pacifica interim Executive Director (iED) Dan Siegel illegally advised listeners not to vote for one KPFA candidate slate; a popular programmer used station facilities to lobby for the pro-management slate; he and management ignored the election supervisors’ remedies for this violation; management blocked and censored timely candidate information on the air and website.

• Pacifica’s New York station is unable to fulfill its fund drives, is heavily and increasingly in debt, and is drawing funds from KPFA and the other stations to meet its expenses, potentially threatening the entire foundation.

• Yet the iED blocked Directors from examining the books, violating the Bylaws and state law, although a previous protracted struggle had re-affirmed Directors’ inspection rights.

• The KPFA General Manager Search Committee and Local Station Board, after two years of work found and recommended only a single available but eminently qualified candidate, but is now required by the interim Executive Director to begin a second search – thereby extending KPFA’s unpopular interim management.

* The Gag Rule is back – the March 21 forum by staff, community organizers and media activists was prevented from being broadcast, at the last minute, by management, which also forbad them to speak about it.

• KPFA membership has declined as volunteer, community based public affairs and arts programming and the Folio have been replaced by ”Healthy Station” NPR model program grid of “professional” sound and 65% music.

This is just a sampling of recent problems – which taken together point to an ongoing attempt to circumvent the democratic governance hard-won after the attempted 1990’s takeover by forces hostile to the mission of progressive community radio.
The bylaws and democratic institutions of the network are all under attack by the current administration, and power cliques at the stations are not being controlled in the interests of democracy, transparency, and accountability.

We need to stop this trend and reclaim our station and network again, as we did before. You can help!