Add an Event
Newswire
Calendar
Features
Home
Donate
From the Open-Publishing Calendar
From the Open-Publishing Newswire
Indybay Feature
Publish to Newswire
Add an Event
Related Categories: California | Santa Cruz Indymedia | Education & Student Activism
Take Hold! University at UCLA May 12 - 16
by Take Hold!
Friday May 9th, 2008 6:15 PM
During the week of May 12 - 16 (week 7), students from across the University of California system will erect tents on a lawn area that they claim in the heart of the UCLA campus. There, students will build and run a community that prefigures the ideals of full public access to higher education and a democratically organized, socially accountable university. 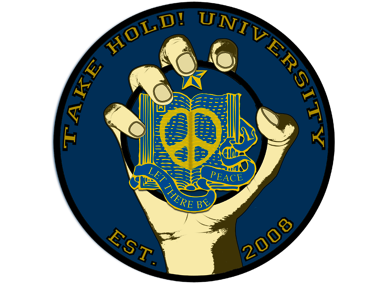 What is Take Hold! University?

Take Hold! University is a structured space for students, faculty, and staff from across the UC system to actively engage with the educational process. Participants will hold free workshops, programs, and classes of their own design and direction, covering a wide variety of topics, with a common focus on student empowerment. This will be an opportunity for students to become more involved with their education. By interacting outside the formal classroom setting, students will gain mentors and leadership skills from their professors and each other. Student groups will network and collaborate outside of their customary or preexisting networks. By bringing these diverse constituencies together, we aim to encourage students to “take hold” of their education!

Take Hold! University aims to build community and foster mutual respect through creating a unified space where people can practice participatory democracy. It builds on a student movement around issues of educational access and the social responsibility of universities that is unfolding across U.S. campuses in the Tent State University project. Central to our mission is the belief that education is a right and not a privilege. Some of the primary goals of TH!U include the following:

•Mobilize UC members in opposition to student fee increases. (TH!U will take place during the UC Board of Regents meeting on the UCLA campus, at which we anticipate the Board will vote on increasing student fees.)

•End unwarranted restrictions on the exercise of first amendment rights on campus.

•Express student opposition to the war and occupation of Iraq and the UC’s engagement with this crime.

•Empower faculty and students with decision-making authority in critical educational domains that have been arrogated by the administration.

Take Hold! University will be located on the two grass lawns of Dickson Terrace, Between Haines Hall and Humanities Building.

Take Hold! University will consist of six large canopy tents, each with a specific purpose:

Logistics Tent – This tent will be the center for coordinating TH!U. This tent will consist of a sign-in table, a scheduling table, and a check-in point for security. The tent will serve as a central location for coordination with faculty and student groups regarding workshops and classes, as well as the daily distribution of tasks necessary to keep TH!U running smoothly. There will be a minimum of four organizers at the event and accountable for the Logistics Tent at all times.

Town Hall - This tent will be a multi-purpose space for classes and workshops during the day. In the afternoons, the Town Hall will be the space for student-led discussions on various topics of concern. In the evening, the Town Hall will be the central location for a town-hall style meeting, where students will democratically vote on various issues pertaining to the functions and content of TH!U.

Arts Center - The concept behind the Arts Center is to provide the space and materials for a participatory creative outlet. This will be the space where students can try out new ways of expressing themselves, while creating beautiful art with other students.

Student Empowerment Tent – This tent is primarily going to be used as a space for materials and information gathering and dissemination. This includes tracking the progress and development of Take Hold! University in real time, and will also be a space for student groups to create alliances and partnerships around the issues they represent, through specific programming and materials.

Two Common Tents for Classes/Workshops – These will be general tents used throughout the day for university class meetings and workshops held by student groups and/or faculty. They will be adjacent to the Town Hall tent and can be opened up to create a larger space inside Town Hall in the evenings. These tents will include blackboards, microphones, and other accommodations for faculty.

§how did this go?
by meme
Wednesday May 21st, 2008 4:27 PM
Can anyone give a reportback or information on this event?
Add a Comment
§A Week of New Community and New Developments for Demil and UC Student Empowerment
by via ucnuclearfree.org
Friday May 30th, 2008 10:59 PM 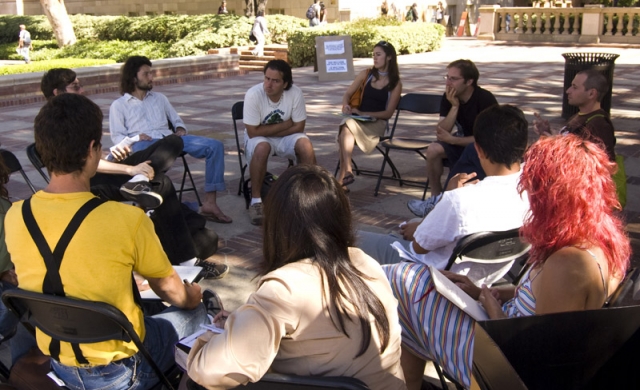 original image (800x488)
Last week in UCLA, student activists organized an event called Take Hold! University from May 13-15, centered around a meeting of the UC Board of Regents at which the Regents were expected to vote to raise student fees for the seventh time in eight years. The event, which received endorsements from a broad coalition of student activist groups from a myriad of issues at UCLA and attracted attendees from four other UC campuses, hosted workshops, nightly town hall meetings, art, music, food, discussions, and more, in an attempt to transform the UCLA campus, however temporarily, into a true community area focused on students and self-directed, grassroots education, as well as serve as a gathering point for students to take action at the Regents’ Meeting regarding the issues most important to them. At all of these goals, Take Hold! was overwhelmingly successful and, starting Tuesday afternoon when I first arrived at UCLA, I could feel the energy building for important and inspiring actions. Moreover, the students I met that week at UCLA will continue to be powerful friends and allies in the coming years.

The first event of note occurred Wednesday morning, when the Regents’ finance committee met to discuss first Lt. Governor John Garamendi’s proposal to freeze fees at their current levels, adjusted only for inflation, then to discuss a student fee increase of 7.4% for all undergraduate students, or roughly $600 a year. Following an impassioned public comment period, a presentation by UCSA telling the stories of students who would no longer be able to attend university with raised fees, and another persuasive presentation by Garamendi, who pointed out the ill effects of the UC’s continuous trend towards privatization, the regents voted against the fee freeze proposal. Then, despite a significant amount of token hand-wringing and apologetic language, the regents voted overwhelmingly in favor of raising student fees.

Immediately following the Regents’ vote, one of the student activists I met at UCLA, David Chavez, stood up on his chair and shamed the Regents on their reprehensible decision, then led the entire public comment area, filled to capacity with dozens more agitated students stuck outside the meeting hall, in a chant of “Regents, Regents, can’t you see? You’re creating poverty!”. The scene reminded me greatly of the Demil coalition’s May 2005 action, the first Regents meeting I ever attended, when we disrupted the meeting immediately after their vote to enter into bidding on LANL with Bechtel, WGI, and BWXT as partners. The difference in this case, though, was that fifteen students and one non-student ignored the order to disperse shouted at them by the police, and eventually linked arms and awaited arrest. Students disrupted the meeting’s proceedings for a significant amount of time, and were released of their own recognizance after being charged with misdemeanor failure to disperse.

That evening at the town hall meeting, we decided to ignore some of the impositions the UCLA administration had placed on Take Hold!, and a couple attendees, mostly demil coalition members, pitched tents in Rourke Plaza and camped out on campus overnight. This development was helpful in holding the space overnight and transforming this section of the university into a more comfortable, livable area for Take Hold! participants, and didn’t meet with any negative response from UCLA police or administration.

Early the next morning, Coalition to Demilitarize the UC members – twelve in total – faithfully returned to the Regents’ meeting public comment period with an official collective statement from the Student Department of Energy Lab Oversight Committee (DOELOC), an official body of three UC student governments and recent project of the Coalition to Demilitarize the UC, on UC management of the nuclear weapons labs at Los Alamos and Lawrence Livermore. The statement essentially broke down all the lies and mistruths Regent Norman Pattiz – chairman of the Regents’ Committee on Oversight of the DOE Laboratories, president of both LLC’s which manage the labs, and founder and chairman of radio conglomeration Westwood One – had told at the March 19 Regents’ Meeting regarding the labs. The Coalition to Demilitarize the UC has done this sort of thing before at prior Regents’ Meetings, but this time something completely unprecedented happened – and I would argue it happened as a direct result of all the direct actions the Demil coalition has done in the past two years as well as the direct action against fee hikes the day before. This time, after our collective statement, Pattiz stood up from his place at the Regents’ table and walked to the far corner of the Covell Commons conference room, where we sat in the public comment area. He ducked under the partition into our peanut gallery, sat down, and proposed to meet with DOELOC in UCSB sometime in the near future – within the next few weeks. We decided to go ahead and meet with him, and use this meeting as an opportunity to get DOELOC a space within a Regents’ meeting to give a presentation about the labs, and their true nature and function.

Next in the meeting agenda was the Regents’ Committee on Oversight of the Labs, during which Lt. Governor John Garamendi once again asked a series of very pointed questions regarding UC’s lab management and plutonium pit production at LANL, such as, “So, the UC is directly involved in manufacturing nuclear weapons, correct?" and "Just so we're clear, Los Alamos is now the only facility that can manufacture plutonium pits?" UC Vice President S. Robert Foley attempted to answer the first question in vague language to try to downplay the UC’s connection, to which the Coalition to Demilitarize members present began to laugh. Then Pattiz stepped in and admitted, "Okay, yes, UC is directly involved with manufacturing nuclear weapons," and Garamendi turned to Foley and said something to the effect of, "don't ever try to baby-talk me again.” Garamendi continued, asking more questions and opining that it's not in the UC's best interest to be managing these labs, and eventually Pattiz, unable to persuade him otherwise, interrupted Garamendi, citing “Chair's privilege” to silence Garamendi and bluntly end the DOE lab committee meeting. It was easily the most vocal dissention I’d ever seen on the board of regents regarding lab management.

The rest of the day at Take Hold! featured more workshops, including a second UC Nuclear Free workshop presented by myself and NAPF Programs Associate Nick Robinson which, though sparsely attended, was very well received – enough so that UCLA students invited me to speak on a campus radio show on Sunday, May 18 about the UC’s management of the nuclear weapons labs, an opportunity I eagerly accepted. In all, Take Hold! was a fantastic event filled with great people and accomplished very important things. I left it feeling immensely positive about the movement against UC management of nuclear weapons, and the future of UC student activism as a whole.